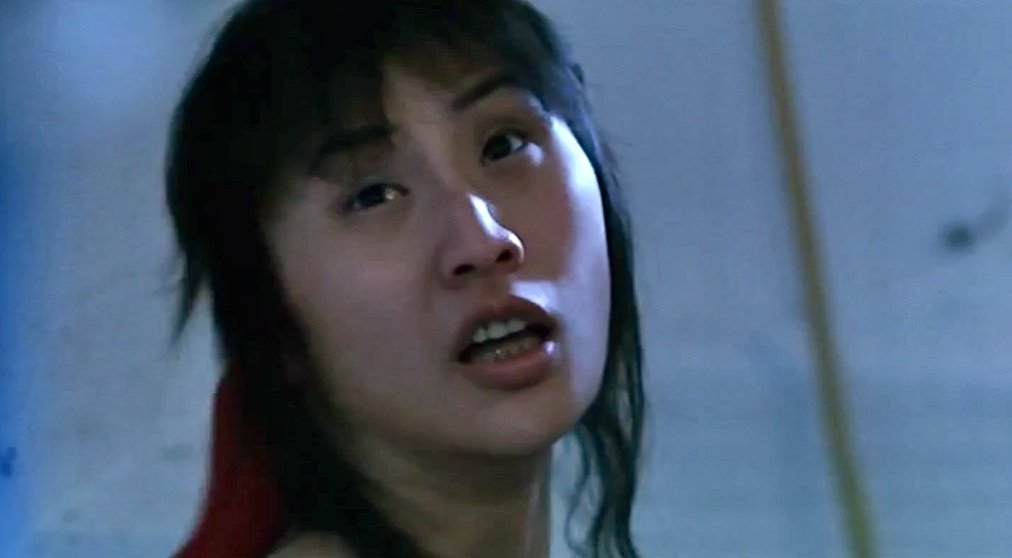 One of the most infamous Cat III shriekers, in which a maniac incensed by the colour red stalks young women…

Red to Kill is possibly the most infamous Hong Kong Category III film of them all, and is a journey to the darkest, sleaziest recesses of exploitation cinema. Even compared to its deranged peers, it stands alone as a foul monument to depravity, and anyone reading this review who has a less than an iron cast stomach should stop reading right now. In the genre’s never-ending search for new sources of outrage, it was up to Billy Tang, one of Cat III’s favourite sons, having directed the likes of Daughter of Darkness, Dr. Lamb and other classics, to plumb new depths by making a film about a psychotic, necrophiliac rapist/serial killer who stalks his prey in a home for the mentally-challenged.

Honestly, it’s pretty hard to imagine a more depraved film than one which features multiple scenes of a cackling pantomime psycho raping, killing, and then raping post mortem a series of scantily clad women with intellectual disabilities. However, and I’ll quite possibly be crucified for even suggesting this, Red to Kill is saved from being the utter atrocity that it appears to be on paper by actually being quite funny. Honestly, the film is too absurd to be taken seriously, and even given the dubious content, is so single-minded in its heaping on of abuse and over the top horrors that the viewer is soon bludgeoned into numbness, whereupon the whole thing becomes quite amusing in a Grand Guignol sort of way.

The film’s heroine is Ming Ming (the always game Lily Chung, who also suffered through Daughter of Darkness and a number of other Cat III shockers), a mildly handicapped girl who is sent to live in a care home after the death of her father. Unfortunately for her, women in the home are being stalked and killed by a mysterious madman who is in fact Doctor Chan (Ben Ng, The Eternal Evil of Asia). The doctor is outwardly a normal, kind man who dotes on his patients; however, as a result of a bloody childhood trauma, whenever he sees the colour red he flips out in the worst possible way. After witnessing Ming Ming perform a ballet recital in a red dress, Chan becomes obsessed with her, at first assaulting her, and then rather oddly deciding that he wants to settle down and start a family with her. A brave social worker fights for justice, but the courts are fooled by the evil rapist, who is freed to pursue poor Ming Ming one final time.

After reading the above, I’m sure that Red to Kill seems like the devil incarnate. However, Billy Tang lays everything on so thick that it almost becomes an exercise in surrealistic, comedic evil. Pretty much every aspect of the film is unbelievably over the top, from the shrieking music to the gaudy neon colours that bathe almost every frame. If nothing else, it all speeds by in a lurid blur, and the viewer is barely given a chance to draw breath before the next horror splatters up onto the screen. This is of course a cheap tactic, beloved of many an exploitation filmmaker, though here it serves its purpose nicely. The viewer is subjected to an constant bad taste barrage of nudity, abuse and violence, and although all of it is incredibly dubious, it’s simply so deranged and applied in such a lunatic, haphazard fashion that it rapidly comes to resemble more of a lampoon than anything else. Granted, there are some incredibly offensive scenes along the way (including the most unpleasant shower sequence in film history), so this comment probably only applies to those who like their comedy beyond pitch black.

The acting in the film doesn’t exactly help the viewer to take things more seriously. Lily Chung gives an unrealistic performance as wretched Ming Ming, and while it’s easy to feel sorry for her, this is due to the abuse her character takes rather than any real empathy. Ben Ng is hilarious as the killer — normal one second, then grimacing and bellowing with laughter as soon as he sees the colour red. Really, the viewer can’t help but wonder how the hell this guy has managed to not only function as a member of society, but to become a respected doctor. Did he somehow manage to avoid seeing the colour red for a large proportion of his life? The complete disregard for creating a realistic villain or for adhering to any kind of logic or cinematic common sense helps sever the film’s ties with reality and pushes it yet further into the realm of demented comedy.

So, what’s the bottom line? Well, I must admit to enjoying Red to Kill, and while though a Cat III classic of sorts, it’s certainly not a film I would recommend to everyone. It really all depends on how seriously you take the ludicrous and extreme content, and while I can obviously understand how the mere premise of the film may well put off 90% of viewers, the 10% who can leave their moral sensibilities at the door will probably be very entertained, or will at least bear witness to just how low a film can go.