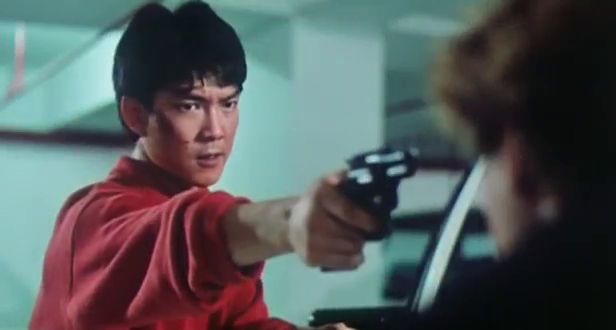 One of the famed Seven Little Fortunes, Yuen Biao was often overshadowed by his more famous cohorts Sammo Hung and Jackie Chan, collectively known as The Three Dragons. Usually cast as a supporting actor, Yuen got his moment in the spotlight in a few actioners of varying quality. One of the most well known is Righting Wrongs (aka Above The Law).

Yuen plays a Hong Kong attorney back from a stint in the US, involved in prosecuting two mob bosses for murder and drug trafficking. They walk free when the lone witness and his family are killed on their orders. Yuen decides to exact revenge and goes renegade. He targets the gang’s members and murders one of the bosses. Meanwhile, CID agent Cindy Jones (Cynthia Rothrock) who investigates the crime, suspects Yuen as the culprit and tails him. A young neighbourhood kid (Fan Siu-wong) becomes involved when he witnesses the murder of the other boss and is targeted by the real killer.

Righting Wrongs is a standard revenge flick, light on plot but marked by terrific action that picks up in the second act when Cynthia Rothrock enters the film. Yuen Biao and co-star Rothrock engage in several amazingly complicated fights throughout, including one against each other in a living room. It’s a fine vehicle for Yuen – perhaps his most famous film without Sammo or Jackie – but Rothrock steals the show.

Coming off star making turns in Yes, Madam and Millionaire’s Express, Righting Wrongs was the first in a three picture deal with Golden Harvest for Rothrock. She was meant to co-star with Jackie Chan in Armour of God. However, when Jackie had his life threatening accident on set, production was postponed and Rothrock was cast in Righting Wrongs opposite Biao. It’s a real breakout performance for her.

Rothrock’s work ethic won over the Hong Kong crew and she was affectionately given a Chinese name, Lau Foo Lok. The original ending saw her character meet a gruesome end but was changed when a test audience demanded she survive. Two years later Righting Wrongs got a semi-sequel, Blonde Fury, which focused on Rothrock’s character and left Biao absent.

There are loads of familiar faces in Righting Wrongs whom Hong Kong movie fans will recognise. Rothrock’s partner is played by director Corey Yuen and his domineering father, also in the police force, is played by veteran star Wu Ma (Peking Opera Blues, A Chinese Ghost Story). The versatile Roy Chiao (Enter the Dragon, Bloodsport) shows up as the Judge, while one of the bosses Yuen Biao is out to catch is played by James Tien. After his time as a leading star in early Golden Harvest pictures and stint opposite Bruce Lee in The Big Boss and Fist of Fury, Tien became known for villainous supporting roles in the latter half of his career.

Righting Wrongs is no classic. It has aged considerably and often looks like it was made on a shoe string budget. Both the sound effects and special effects are hokey; in the first five minutes Yuen Biao stops an assassination attempt, leaving his law book bullet ridden, dangling on a string as it’s shot at. The footage is sped up whenever a chase is happening, presumably done to enhance excitement, but which gives Rothrock and Yuen jerky movements reminiscent of silent film stars. Additionally, Rothrock didn’t speak Cantonese and is dubbed by a voice with an irritating high pitched tone. In some territories where Hong Kong films would play there was a policy of comeuppance for anyone who broke the law in a film. Thus Righting Wrongs ends on an abrupt note, which is jarring and unsatisfying.

Righting Wrongs is all action and little else, but the action is genuinely exceptional. Biao and Rothrock’s incredible displays of skill make the film worth seeing.

Righting Wrongs screens at the 2015 Udine Far East Film Festival as part of their HK Martial Arts Special Focus. The festival runs from 23 April to 2 May.