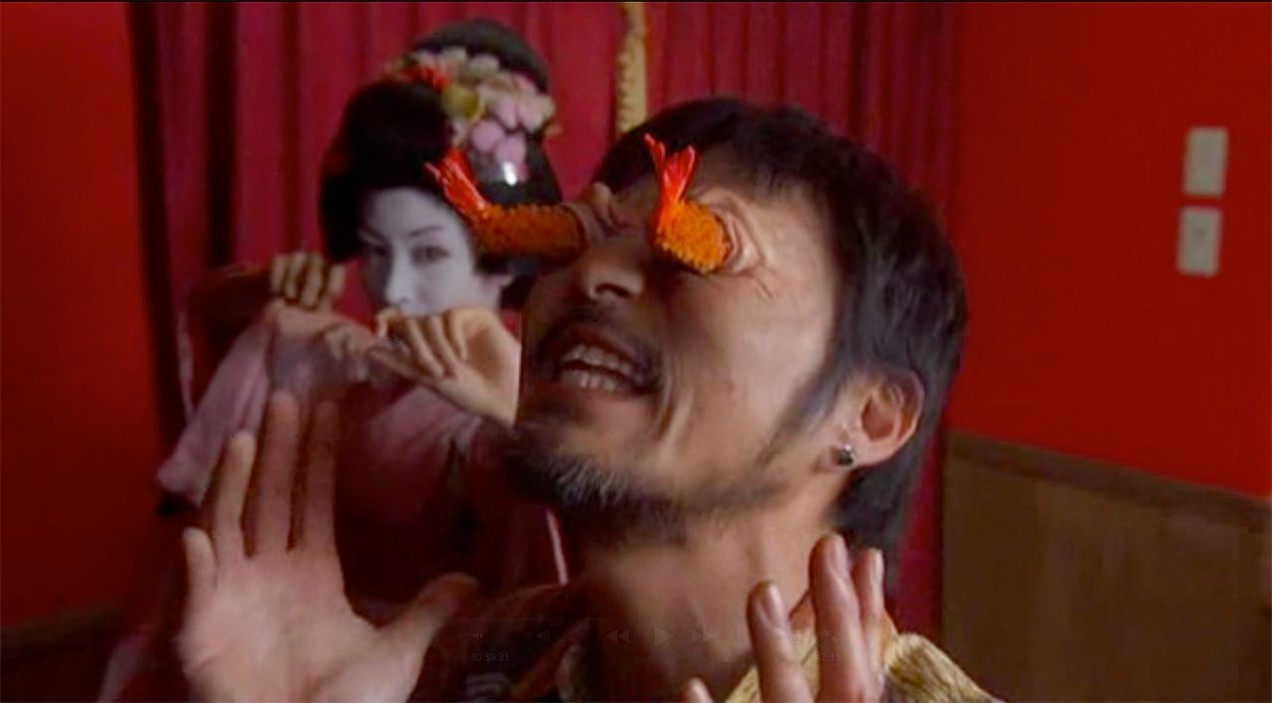 Yoshie Kasuga (Aya Kiguchi) pines to get out from the shadow of her more successful older sister, geisha Kikue (Hitomi Hasebe, Battle Royale II). Constantly bullied by her, a chance meeting with Hikaru Kageno (Takumi Saitô, Vampire Girl vs. Frankenstein Girl, Tamami: The Baby’s Curse), son of steel tycoon Kenzan Kageno (Tarô Shigaki) appears to be a way out, so she accepts an invitation to his home – a bizarre amalgamation, part factory, part temple.

Little does she know that Hikaru plans to build an army of robo-geisha’s, assassins at his beck and call, and Yoshie and her sister are the latest recruits! Soon the sisters squabbles become far more deadly, as they are pitted against each other for their very lives.

But if Yoshie proves herself to be the greater warrior, then it soon becomes apparent she has far too much heart to be a ruthless killer. Can she stop the kegano’s master plan to blow up Mount Fuji?

If Geisha Assassin missed every opportunity to have fun with it’s core concept, then Robo-Geisha grabs them and much more. Utterly silly right from the start, director Noboru Iguchi transplants Cinderella into the usual, gruesome mechanical fetishism and body shocks – this may still be the offspring of Tetsuro, but somehow this seems less unpleasant, less ‘grindhouse’ in tone, than most the films that have gone before.

Perhaps much of that comes from there being far more concentration on CGI effects than the normal prosthetics and make up. Yoshihiro Nishimura even has time to cameo as a yakuza boss. Fans of the splatterpunk scene may well have a problem with that, but the result lets the true silliness of the film shine through, unencumbered by scenes that make you feel more than a little nauseous.

Unfortunately it also feels a bit cheap, somehow less spectacular than the shoestring resourcefulness these filmmakers used before they could afford so many computer graphics.

No matter, there’s plenty here to delight, from the temple that turns megazilla, smashing over buildings as they spout blood, to a wonderful spoof of a Lone Wolf and Cub style duel in the rice fields, complete with yakuza boss in samurai fancy dress. In The final battle between the sisters Kikue divides in half, the top jet powered and still duelling, the bottom hilariously kicking away. Then there’s flying butt blades and even extracting butt swords.

There’s plenty more movie references too. For instance the masks of the highly-sexualised Tengu assassins (played by Asami, The Machine Girl, Meatball Machine: Reject of Death, and Cay Izumi, Tokyo Gore Police) recall that used by Malcolm McDowell in the notorious scene from A Clockwork Orange.

Like Machine Girl, this film holds together much better than most if it’s peers. It’s not quite as good, and less CGI would have been preferable, but it’s still a hell of a lot of fun!

Robo-Geisha is released today on Blu-ray and DVD by Cine Asia.

Solid master of the film, but rather a lack of extras to win the ‘Special Collector’s Edition’ tag I would think…