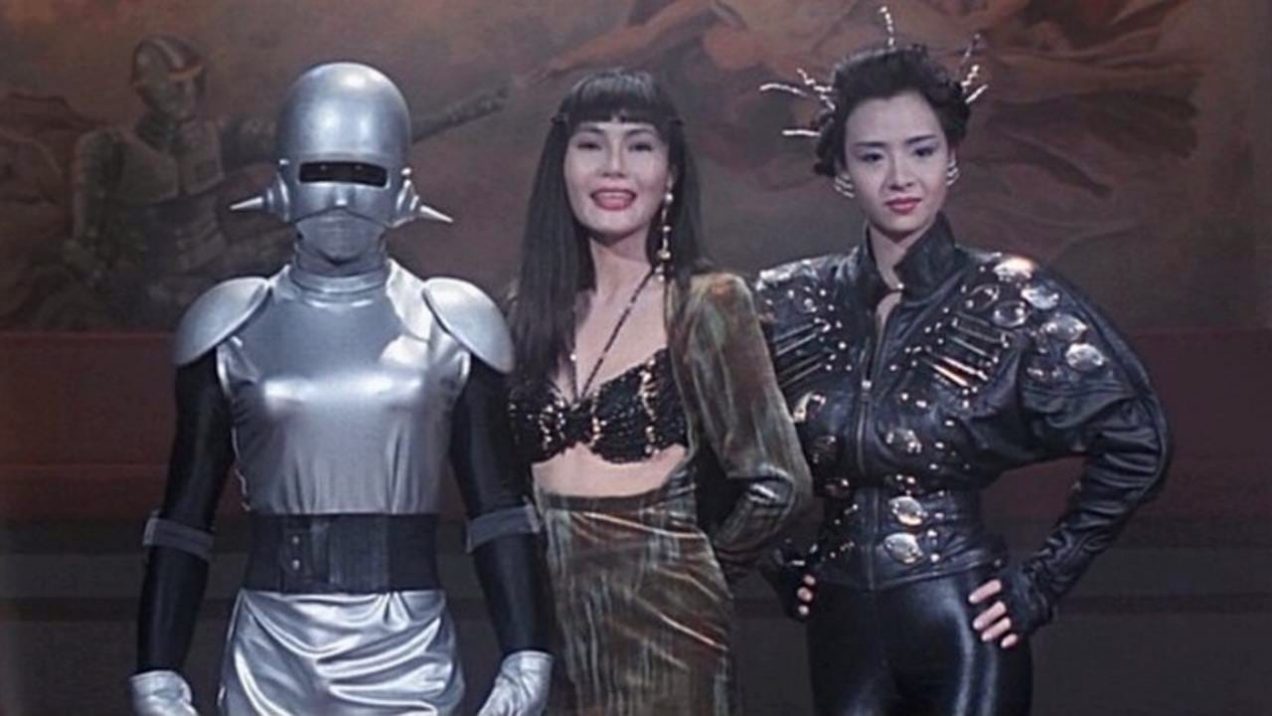 A few minutes into Robotrix, you might wonder exactly what you’ve let yourself in for. The credits open over a montage of stock footage of Hong Kong’s business district, lingering on the still-freshly completed HSBC Main Building like a tourist board promotional video, while a distinctly 80s New Wave sounding slice of Canto pop plays. We soon find ourselves in a hotel, where a police detail led by Sgt. Selina (Aoyama Chikako) babysits the son of a Sheik while he takes advantage being able to afford all the (lightly dressed) ladies from a brothel for some fun in the hotel’s pool. (Stay tuned; there’ll be a lot of that sort of thing.)

However, when a mysterious figure (played by one of Hong Kong’s favourite martial art-toting bad guys, Billy Chow, High Risk, Tai Chi Boxer, Fist of Legend) turns up to kidnap their charge, Selina ends up fatally wounded. Cut to… A robot exposition overseen by the Sheik, where German and American produced very human-looking androids (Mark King and Ken Goodman respectively, who both had roles in another Golden Harvest production that year, Armour of God II: Operation Condor) face off against each other. Before the Bon Jovi-haired American robot malfunctions, putting everyone in danger. Thankfully a robot designed by Doctor Sara (Hui Hiu-Daan) turns up to save the day.

The police arrive to inform the Sheik that his son has been kidnapped, delivering a VHS in which mad scientist Ryuichi Yamamoto declares his ransom for the son in order to create a legion of androids, before revealing that his has transferred his brain patterns into the figure we know as Billy Chow. (Oddly, despite arriving on videotape, I noticed a Pioneer LaserDisc remote control in the Police Commissioner’s hands?) If the police want to catch him, they need help, but maybe they can transfer Selina’s brainwaves into Sara’s android. And she doesn’t need to look like a machine either, as it turns out Sara’s assistant Anna (Amy Yip, Sex And Zen, Erotic Ghost Story) is in fact a robot. (And why not? Yip’s figure always did look like a teenage boy designed it.)

Selina, now in fact Eve R27, unites with her fiancé Chou’s (David Wu, Full Throttle, Young Wisely 1, Farewell My Concubine, Temptress Moon) squad to track down Yamamoto, who risks giving himself away by frequenting brothels and murdering prostitutes, or anyone unfortunate enough to get in his way for that matter. He’s not the only one that’s oversexed, though, as Selina and Anna both experience lovemaking in their new forms. Well, this is a Category III film, after all. Selina, Chou and the police just need to find Yamamoto and the location of the kidnapped prince before it’s too late…

Robotrix largely feels like the plot was written on the back of a fag packet with the details filled in as the filmmakers went, and from the sounds of cast member Vincent Lyn’s comment to Richard Myers in Myers’ book Great Martial Arts Movies: From Bruce Lee to Jackie Chan— and More, that’s not an unfair description. “Now that was one wild shoot. The cast and crew were all over the place and you were lucky to find out what you were doing before the cameras rolled. I spent more time laughing on the set than anything else,” he said. There’s plenty of ridiculous science going on, from the slightly Metropolis-inspired brain transferral process, to the image of a killer captured on a dead man’s eyes. (The similarly themed Tsai Hark produced I Love Maria seems to have been been quite an influence.)

Like many a Hong Kong film, Robotrix darts around in tone. There’s slapstick comedy, particularly from Selina’s police colleagues who bumble around like the Keystone Cops most of the time. During a ‘sting’ operation with Anna to catch out Yamamoto, they seem more interested in watching Anna in flagrante delicto than actually catching the murderer. Then that quickly turns to brilliantly over-the-top violence, as Chow’s character rips the head off one man with a wicker suitcase, later viciously running over a cop, several times.

As such, there are more than a few glossy, well lit-sex scenes; by modern standards these seem pretty tame. Despite that, it was interesting to see that the latest release still required compulsory cuts from the BBFC in order to obtain certification from it’s original video release in 1997, removing two scenes of eroticised sexual violence. Though commendable in principle, I wonder if that equates when rather more questionable attitudes towards women generally pervade Hollywood films? It also makes you wonder how the BBFC sees audiences for this film, easily rather niche, in comparison with art films or commercial Hollywood films?

Selina and Anna, along with Doctor Sara, make a crime fighting team not uncommon in 80s and 90s Hong Kong cinema, through the Michelle Yeoh and Cynthia Rothrock team-up in Yes, Madam, through the Angels series and derivatives and back to Yeoh with Anita Mui and Maggie Cheung as comic book style leads in Heroic Trio. Hilariously, they always look like they’re heading out to a nightclub, or did everyone dress that way then?

James Cameron’s Terminator is easily an influence for Chow’s villain, while Paul Verhoeven’s RoboCop is more than a starting point for Selina’s reanimation; though the process itself, with two naked Selina’s laid out in the lab, in more than a little reminiscent of the sacrifices laid out in Legend of the 7 Golden Vampires. A showdown in a scrapyard has more then a little of Shinya Tsukamoto’s Tetsuo: The Iron Man about it, and you can imagine the directors that went on to make the Tokyo Gore Police and The Machine Girl films grew up on films like this.

What is perhaps most surprising about a film like Robotrix is how much the filmmakers make out of a reasonably low budget and chaotically quick turnaround. Some of the set design, in particular, puts more thought and invention into the production than you might expect. For instance, a mural at the exposition riffs on Michelangelo’s The Creation of Adam fresco in the Sistine Chapel with a robot taking the place of Adam. Art Director Bill Lui would work on many more impressively styled films, including Green Snake, The Bride with White Hair 2, Black Mask, Infernal Affairs II, Invisible Target, Painted Skin and The Lost Bladesman.

The action is well choreographed too, as Yuen Tak (Fong Sai Yuk, She Shoots Straight, The Iceman Cometh, High Risk, Gallants) and Bruce Law (The Phantom Lover, First Option, Inseparable, The Flowers of War) combine to give the impression their female leads are on a par with experienced martial artists like Billy Chow.

Sadly for several of the stars, this might be the height of their careers. Japanese-born Chikako returned to Japan for much of her later career, except for La Brassiere and follow-up Mighty Baby. Daniel Wu never seemed to make the most of his (then) good looks, never quite making it to a regular romantic lead. Similarly director Jamie Luk’s career has never totally taken off, with irregular work ever since. Though having some 159 films to his name as an actor (according to HKMDB), and working as an assistant director to Derek Yee on One Nite In Mongkok are pretty impressive credits alone.

Robotrix is one very silly film. But then you probably guessed that already. Just switch off your brain and enjoy! Or better yet, find an android to transfer your brain into…

Robotrix is available now on UK DVD from MediumRare Entertainment.

Fremantle imprint MediumRare bring this guilty pleasure to UK DVD for the first time (I think!). It’s a pretty decent video transfer, but sadly lacking on the audio; offering a muffled original Cantonese soundtrack where dialogue on TV sets is almost completely inaudible, and a loud, brassy English dub. Subtitles seem to come from the dubbed version, and I can’t imagine it was *that* close? (The giveaway is the English dialogue in the Cantonese soundtrack, which yes, the dubbing team decided to dub as well, while making it clunkier.)

Extras are meagre, with just the original trailer, but it is great to see some of these popular Golden Harvest productions from the 80s and 90s make it to UK DVD. I just hope MediumRare take a little more care in future releases.