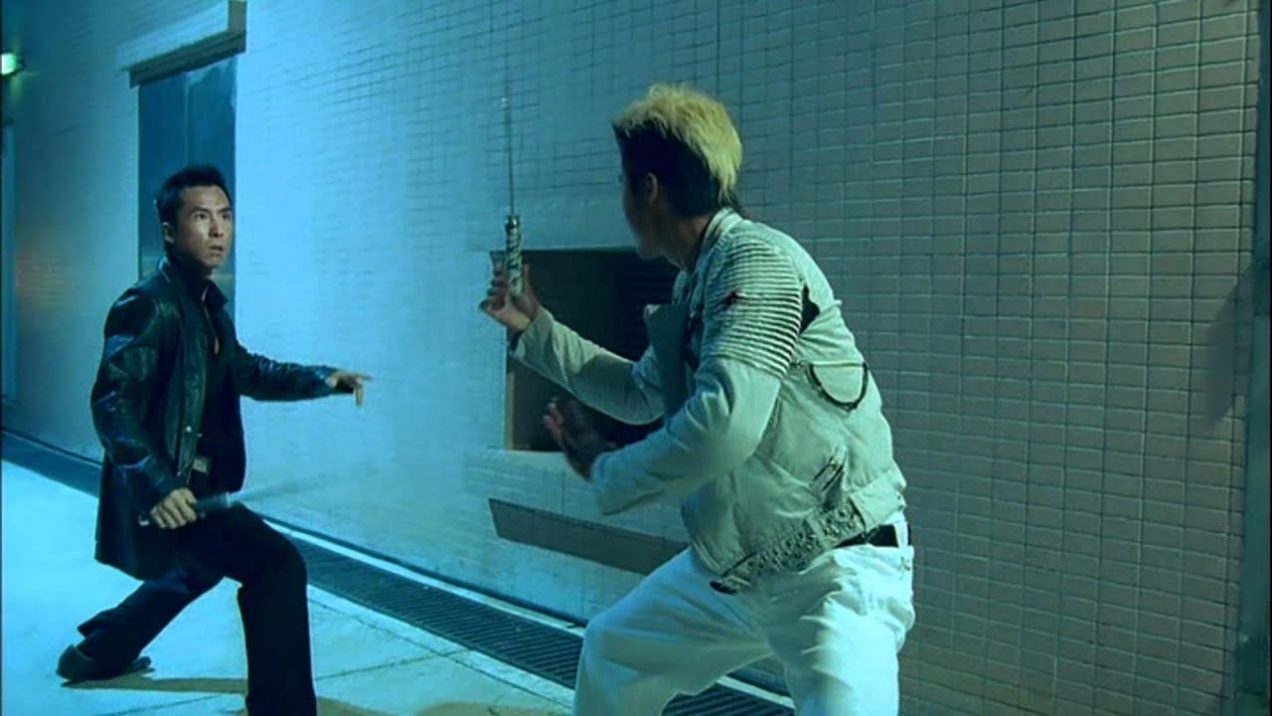 Finally released in the UK – thanks to a tie-up between Cine Asia and Weinstein’s US-based Dragon Dynasty label – one of the best martial arts films of the last decade…!

When Inspector Wa Kwun (Donnie Yen) joins an established crime unit, soon to replace retiring Detective Chan Kwok Chung (Simon Yam, Election, Exiled, Full Contact), he finds a team that have spent too long crossing the line between right and wrong. Chung has become obsessed on bringing down ruthless crime lord and keen golfer Wong Po (Sammo Hung, Fatal Move, The Prodigal Son) at any cost since Po organised an assassination of a witness and his family, leaving only his daughter alive and in Chung’s care.

Ma finds himself at odds with both the criminals he’s sworn to apprehend and the unit he’s meant to be leading when the team augment a piece of evidence to pin a murder on Po. But when Po hires a deadly assassin Jack (Jacky Wu, Fatal Contact, Invisible Target), Ma’s ethics must take second place to keeping both himself and his colleagues alive.

It’s no surprise S.P.L.: Kill Zone made one hell of an impact on it’s original release and that’s namely down to the extended showdown between Yen and Wu, then Hung. Tightly choreographed by Donnie Yen, there’s a ferocity rarely seen before in Hong Kong action and martial art films – it helped bring a new realism away from the incredible wire-fu for which it’s become best known.

There’s no dispute that the pairing of Hung and Yen was one that long overdue for martial arts fans (and so nearly happened several times before), but the preceding dual with Wu also helped put back this star back on the map – having been originally heralded back in 1996 for films like Tai Chi Boxer. And it all leads to a shocking and unforgettable ending.

The film itself is notably lacking in martial arts for much of it’s running time. Director and writer Wilson Yip expends a lot of time building up the characters of Chung and his team, ably played by Liu Kai Chi (The Detective, The Beast Stalker), Danny Summer and Ken Chang (Tsui Hark’s Vampire Hunters), showing them for all faults and merits.

The theme of police detectives crossing the line to get results is by no means new, but here Yip is more judgemental than his peers and predecessors have been. Yip leaves you in no doubt that they have stepped too far over the line, there can be no redemption. Occasionally it’s a little heavy-handed, but overall superbly shot and tightly paced. The setting of the film in the 90s even allows for some playful shots of old technology like video and dv tapes – ah, remember the good old days?

It’s obvious from some of the commentary on the DVD that Yen pushed Yip to include more fight scenes, revealing that he arranged additional funding for reshoots. It’s hard to imagine the film having the same impact without them.

This was, of course, the first collaboration between Yip and Yen. Since then we’ve had Dragon Tiger Gate, Flash Point and the exceedingly likable biopic Ip Man, and what better time to revisit this film with Ip Man 2 soon to be released and that much awaited rematch between Hung and Yip.

S.P.L.: Kill Zone is released on DVD and Blu-ray on 8 March by Cine Asia.

The UK DVD is effectively a duplicate of the US release, including a full length commentary by ex-Hong Kong Legends expert Bey Logan, special interviews with the cast and crew (Hung, Yen, Yam, Yip and Wu) and behind-the-scenes footage with very insightful optional commentary from Bey Logan and Donnie Yen. (Who are, by the way, old friends – all the way back to when Bey wrote Yen’s own film Ballistic Kiss!)

And you can’t really say fairer than that – but Blu-ray fans should snap up the chance to get this release, as it’s currently not available on this format in the US!