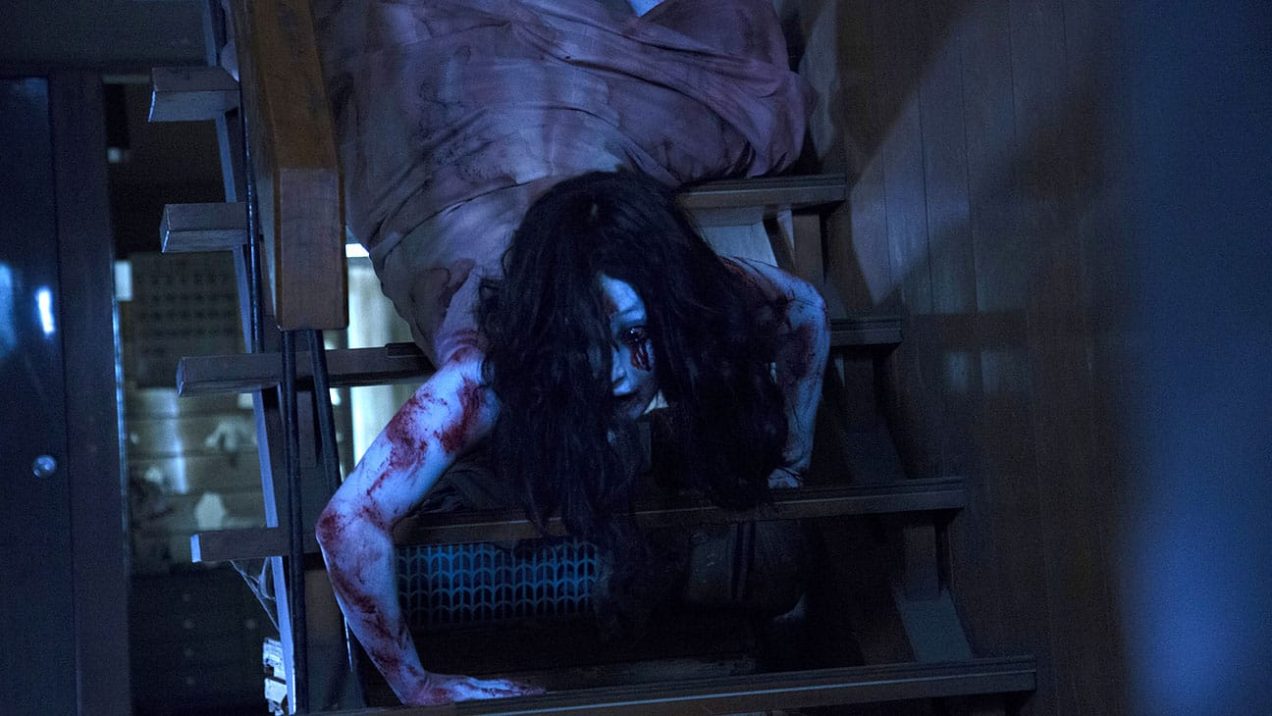 Since the explosion of the J-Horror scene internationally, the Ringu and Ju-on franchises have spawned more sequels, reboots and American remakes than any other. In fact each of them has produced 11 movies – so it somehow was inevitable that someone would come up with the smart idea of bringing Sadako and Kayako (along with her mewling son Toshio). The elephant in the room is that even for fervent fans of the characters, it is hard to say that any of the recent entries into either franchise had been anything close to good. And how many ‘vs’ movies really are worth the celluloid? As this one actually got made due to the positive reaction to what was a April Fools joke, I am going to admit I came into this with the lowest of expectations.

The plot is simple enough. Students Yūri (Mizuki Yamamoto) and Natsumi (Aimi Satsukawa) purchase an old VCR player in order to transfer the Wedding video of Natsumi’s parents. What they didn’t expect was to find a copy of the famous cursed video in it. Which Natsumi of course watches, and finds herself with a mere 2 days to live. They take the video to their Anthropology Teacher (Masahiro Komoto), a self professed geek about all these urban myths. He in turn takes them to a local shrine to have Sadako exorcised, but our favourite vengeful ghost is simply too strong. Enter the double act of Keizo (Masanobu Ando) and his blind schoolgirl sidekick, Tamao (Mai Kikuchi). They hatch a plan to pit Sadoko against another local ghost. Because at the same time another schoolgirl, Suzuka (Tina Tamashiro) has been drawn to the haunted house of Kayako and Toshio – and she is cursed to be killed too. So the plan is to set Sadako against Kayako, and neutralise both curses. Because that’s the way curses work right?

Now, there is a LOT wrong with this film, but it does do some things right. Director Kōji Shiraishi (A Slit-Mouthed Woman, Shirome, Cult) is new to both franchises, but is not a stranger to the horror genre. For a film that has clearly been thrown together in a matter of months he manages to produce a film that is fairly good to look at, with a number of competent set pieces. Even when things go a bit CGI-heavy in the closing stages, the viewer is made aware of what is going on. The scene where 4 elementary schoolboys get taken down by Tomio is very good indeed. He is also a director who is well used to slipping a little humour into his work, so we get a number of sly jokes and the tone is more mockingly respectful rather than slavishly reverential. I actually suspect some of the humour is lost in translation. There is one moment in the second act where the Sadako video gets uploaded to the internet – this is a plot point in the most recent Japanese reboot, and I am sure some comment is being made that I was too dumb to understand. He also decides to speed things up a little, cutting the 7 day curse of the previous movies down to a more threatening two.

One thing I was very happy about is that the film knows its’ audience. It doesn’t spend ages explaining all the backstories of the ghosts. It just sets us up in a world where they are well known urban myths. So no origin stories, no grand mystery to solve. Just curses to be enacted and hopefully retracted. On the other hand I was somewhat disappointed with the new version of Sadako’s cursed video-tape. Rather than being fleeting and cryptic images, it was something more out of the Slender Man meme (which might indeed be the point).

Elly Nanami makes for a suitably creepy Sadako, and Elly Nanami’s Kayako is even better, which only makes the film’s biggest problem even worse. You see, whilst one needs to be aware that in Japanese horror, the pace can be glacial (usually much more about atmosphere than shocks), the fact that Kayako only actually appears about 15 minutes from the end of the film, and the titular fight happens about 5 minutes before the final credits roll means that this is somewhat unsatisfying.

Whilst I did like the fact our ghosts didn’t get a ton of backstory that can be found in 22 other films, sadly the same approach is taken to our human protagonists. Not one character is given any kind of backstory, and this means we can’t get any sort of emotional connection with any of them. Suzuka is served worst of all, not only is her story definitely the B-Plot, but literally nothing is explained, and it all seems rather inconsistent (at the beginning of the film she seems to be moving into a new area and school, but this leads utterly nowhere).

Within this world of paper-thin characterisation we get a real mix of performances. Masanobu Ando’s Keizo (along with his wonderfully blunt child assistant) brings personality and fun to the film. On the other hand, Aimi Satsukawa’s Natsumi is one of the most annoying female characters I have ever seen. If blandness is a reason to be the victim of a vengeful ghost, then no wonder she is first in the queue.

I have been somewhat harsh on the film, but to be fair it is way better than most of the entries in either franchises’ canon. There are a couple of decent scares, and it doesn’t have ideas above its’ station. The ghosts themselves are well realised, and in Keizo and Tamao we have a different kind of pairing that I would not mind seeing in future outings. And there will be future outings.

One thought on “Sadako vs. Kayako”