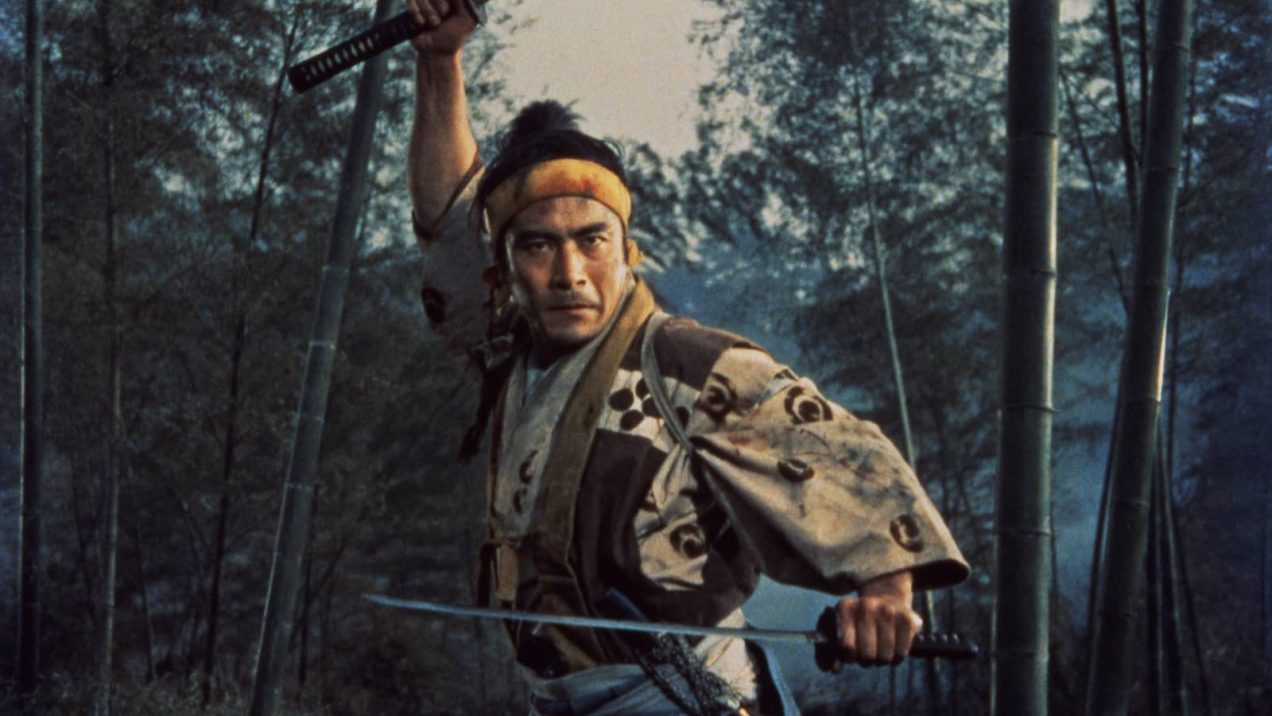 Being the best does mean knowing about your humanity…

By now, you know who Musashi Miyamoto is. If not, I covered his backstory in Samurai I: Musashi Miyamoto. At this stage in Hiroshi Inagaki’s amazing trilogy, Musashi (Toshiro Mifune) finds himself engaging in duels to prove his worth as a samurai. In doing so, on his first duel, he crosses paths with a Buddhist monk (Kokuten Kōdō) who tells him “you are too strong” and that he will be a great swordsman but not a great samurai by favouring only technique and skill over feeling and emotion. Musashi doesn’t know what to make of it and continues on to Kyoto where he tangles with the Yoshioka School and its master, Seijūrō (Akihiko Hirata). At first, all Musashi wants is to challenge Seijūrō with his trusty wooden Bokken sword but because he is not there, the school’s students keep challenging him until he actually starts killing them with it. This brings the film’s main conflict about where Seijūrō’s lieutenants keep contriving to stop their master from dueling Musashi and instead resort to ambush after ambush. Along with this, Otsu, Musashi’s true love, comes to Kyoto to find him. His inability to be with Otsu (Kaoru Yachigusa) for fear of losing his way as a samurai brings real warmth and humanity to Mifune’s performance. He wants to be with her but can’t and she wants to be with him but can’t. As well as that, he struggles with what exactly he should be as a samurai beyond what he has been taught.

While I appreciate the need to tie up loose ends from the first film, I didn’t think the inclusion of Matahachi (Sachio Sakai), Musashi’s friend turned betrayer, Oko (Matahachi’s wife who Musashi rejected) and Oko’s daughter Akemi (Musashi rejected her too) was a valid choice. There’s so much going on in the film that I was upset that the film keeps coming back to them. The stated reason is because Oko (Mitsuko Mito) and her new boyfriend (who is vassal to Seijūrō) want to marry off Akemi (Mariko Okada) to Seijūrō. But there’s no need for all of them. Plus the film feels the need to return Matahachi’s scheming mother (Eiko Miyoshi) and father (who win the continuing award for most ruthless secondary characters ever) into the mix if only to threaten Otsu with murder and Musashi with, well, they’re not going to kill him but I’m sure they’ll try. Problem is Inagaki already has a scene where Akemi and Otsu meet after both realise Takezo and Musahshi are the same man. They initially have a earlier pleasant relationship when they don’t know each other’s intended love but once reveled, Akemi swears Musashi will be hers. So is there a need for Matahachi and everyone from the first film? I don’t think so and I’ll explain by way of the new character introduced here.

Kojiro Sasaki (Kōji Tsuruta) is a master swordsman and unlike the Yoshioka School, values honour and respect. He sees Musashi as a swordsman who could grow into the kind of challenge he is searching for and does everything he can to help Musashi even though it would be advantageous for him to hinder him. Tsuruta’s performance is almost a mirror image of Mifune. He values intention over implementation, sizing up his situation based on what people say and then do. That way he begins to get an inclining as to what the Yoshioka are up to, how Akemi feels about Musashi and how far along Musashi is in terms of skill. It’s interesting to watch him “attempt” to seduce Akemi only to release her and apologise for his brazenness. Inagaki draws us in from a distance as Akemi meets Sasaki for the first time, moving closer and closer until Akemi is in his arms and then revealing he didn’t want to pursue her in that manner. His honourable nature is further explored by his defending of Akemi from the Yoshioka when they come to retrieve her for their master. As honourable a person as Musashi is, Sasaki is a more clinical version of him, further along the path of enlightenment.

The final duel at the eponymous temple sets the stage for all of Musashi’s wishes to be a better man and samurai to come true. He goes to the duel knowing he will be ambushed by the Yoshioka clan, goes knowing that Akemi loves him despite his rejection of her, knows that somewhere Otsu is searching for him. At the ambush in the swamp, the film shows an idea of where the real Musashi might have come up with his sword style, Niten Ichi-ryū (*), where you use both swords, katana and wakizashi, that samurai carried with them instead of the katana alone. Mifune is seen coming to the realisation almost naturally as fighting with one sword alone becomes fatiguing and the new style allows him mastery over the situation. The music and camerawork go from a start-stop style to a more organic, flowing motion as Musashi waits out his opponents along a rice paddy field path while they fall along, trying to stay mobile in the glue-like rice field. Mifune’s command of the character is such that his stoic nature is organic and flowing, a far cry from the angry young man of the first film who wanted nothing but adventure, a man going to face a destiny he could scarcely imagine before now. At the same time, he finally has an epiphany about why he’s getting better at fighting but not at being a samurai. Inagaki handles it beautifully, a moment of colourful self-realisation, as it becomes self-evident to Musashi why he isn’t evolving. 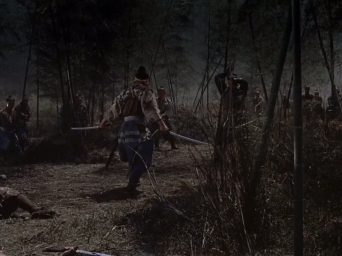 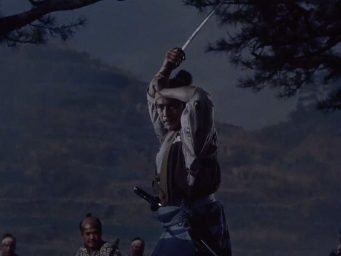 All of this is setting up for an epic clash where all the threads (Otsu, Akemi, Matahachi, Sasaki, Musashi and his torn loyalties) will bind together as Musashi faces his destiny in the third part of the series. As an action film, Samurai II is the best so far with dynamically placed sword fights where the attraction is in the silence and stillness before the strike. Mifune continues to impress as he shifts through the scenes looking for an in on his opponent. As a drama, we see into the turmoil Mifune’s Musashi is dealing with: is the path to self-actualisation through continuing to develop as a swordsman or is it a combination of skill and emotional awareness? At the same time, his feelings for Otsu have not changed but their world has. Kaoru Yachigusa continues to endear herself with me as she struggles with whether loving Musashi is worth it for her both emotionally and spiritually. All of these questions are both answered and re-submitted to the audience by the end of the film. You’ll just have to see the third part if you want total closure. Duel at Ichijoji Temple is a fine drama and action film and Mifune is the definitive article as such a famous figure in Japanese society precisely because he and director Inagaki (with a little help for Godzilla series director Jun Fukuda) chart their own course, playing with history without destroying the silk spider web of connections and emotions the cast have built up.

* If you would like an idea of what Niten Ichi-ryū looks like without spoiling the film, here’s a demonstration video. We’ve timed it to play from the demo of Niten Ichi-ryū only.