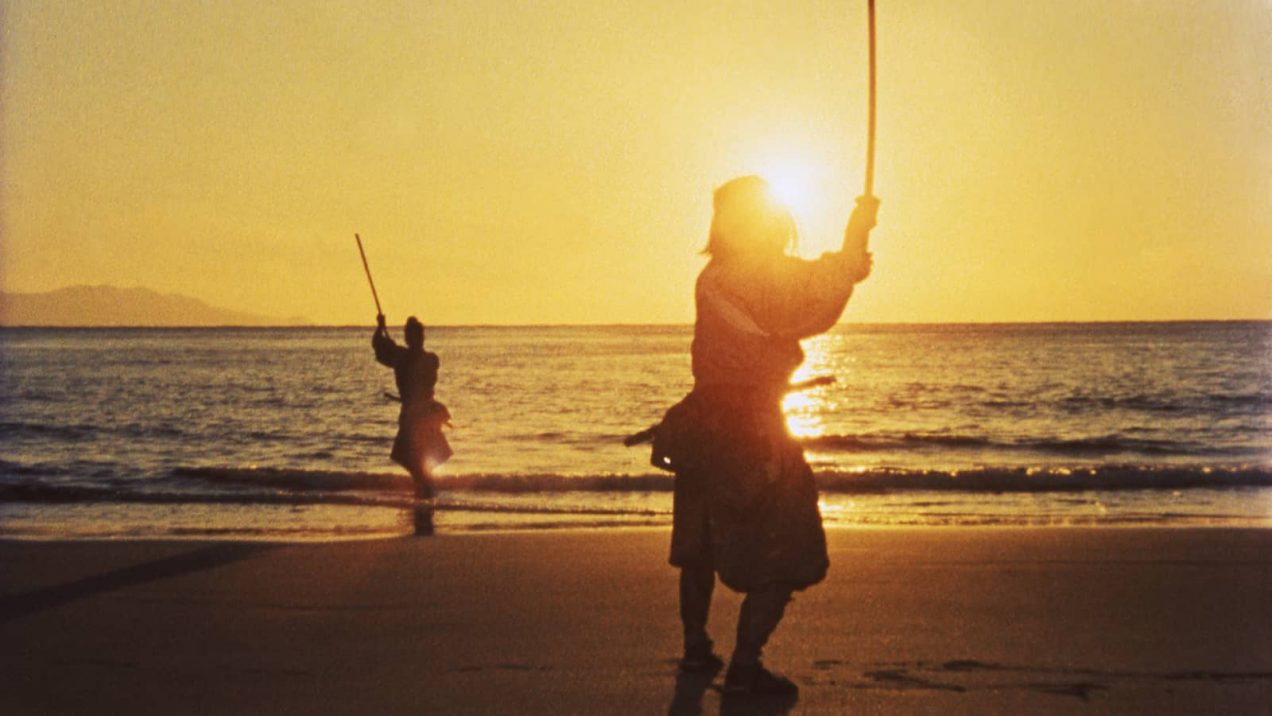 When one thinks of Japanese films, the chances are that Kurosawa’s Seven Samurai, and Throne of Blood will be among the first things that come to mind. These are seen to be the archetypal jidaigeki and chanbara films, and as such feed the popular understanding of genre in Japanese cinema. The greatest films in these genres will either fit neatly within our genre expectations but do everything nigh on perfectly, or change the formula ever so slightly. Samurai III: Duel At Ganryu Island definitely aims to do the former.

The third film in the franchise continues to follow Takezo (Toshiro Mifune) after he abandons the life of a knight errant. He is challenged to fight another skilled swordsman which he agrees to do, but rejects patronage from the powerful Shogun. He struggles with romance, he protects villagers from bandits, and eventually it culminates in the titular duel.

This story may sound familiar. I am not claiming that it will sound like it’s directly related to any film in particular, but it appears to have been created from the concatenation of numerous familiar tropes of a familiar genre. This isn’t to say that it performs these tropes badly either, far from it, Samurai III is a deeply competent film that manages to hit every mark it’s aiming for. The fight scenes are exciting, the love triangle is engaging, and Mifune puts in a trademark performance as the stoic warrior, a role he practically wrote the book on.

With this in mind, if you are a big fan of jidaigeki and chanbara films then you should find very little that you won’t enjoy about Samurai III. However, if you are not a die-hard fan of the genre, you may find that it skirts far too close to archetypical plot points and over the top melodrama. Through even a basic understanding of genre, everything that Takezo says and does can be predicted before he does it, and though the love triangle aspect is carried off rather well, by the end it does sadly feel somewhat hackneyed.

But perhaps this is being unfair, perhaps it is wrong to ask every film in a genre to rewrite the book just to keep things fresh. Does the viewer have any write to complain so long as the film performs the job that it set out to do adequately? It makes talking about this film particularly difficult, because honestly I don’t see myself ever watching it again, but it ticks all the boxes for what a film of this nature should do.

A scene which Samurai III does do very well is the climactic sequence. Everything builds up towards the eponymous battle between Takezo and Sasaki, which means that the tension is at an all-time high when they line up against each other. It’s a spectacular setting, with the fact that it takes place on an island highlighting the isolation of this event; much as there is the obvious motive that it is to protect the villagers, to solitude of the battleground creates a plangeant feeling of dissatisfaction. Whoever wins the duel will have very few witnesses to tell the tale: it is a matter of deeply personal pride rather than honour.

This alone gives greater complexity to the central characters than all of the other events combined. Of course this leads us to the issue that the film is based on the legendary exploits of Miyamoto Musashi, as well as a novel and play that also retold these events. Through layers and layers of adaptation it can be difficult to create character beyond what has already been developed by the source material. Furthermore, as a melodrama then the characters were always likely to be stock. I understand why the characters feel two-dimensional, but that doesn’t mean that I take pleasure in watching them on screen.

Maybe I have not written enough about the actual content of Samurai III, I argue that this is because there is very little content to talk about. This is not necessarily a bad thing; it is one of the most remarkably focused jidaigeki that one is likely to see. It’s nowhere near as interesting as Seven Samurai or Harakiri, but if you want to get your kicks from watching a plethora of fight scenes peppered with romance then you will find very little to complain about. What Samurai III does, it does very well, but there is so much that it doesn’t do that many viewers will likely find it to be rather middle of the road.