Tales from the Muslim graveyard…

Satan’s Slaves is a perfect example of genre film that uses the horror iconography, but instead of copying the Hollywood-grounded conventions, it localizes the story, transforming the genre itself. Brace yourselves for Islamic taboos, ghouls and cursed house in the thick Indonesian jungle forest…

The film tells the story of a family living in an old house in the middle of the forest by the Muslim graveyard. The mother is bedridden, taken by some strange illness, that makes her mute and paralyzes her with fear. Soon she dies and the four children are left home alone, as the father goes to the city to find work to resolves the financial problems. The already grown-up Rini takes care of her siblings, but a frightful presence makes itself more and more visible in the house as the family mystery unfolds.

Director Joko Anwar in Satan’s Slaves consequently continues his filmmaking style, refers to the history of thriller and horror genres, Indonesian as well as Hollywood productions. The film is a remake of 1982 film Satan’s Slave directed by Sisworo Gautama Putra. Joko Anwar recalls watching the original in the cinema as a child, which left a big impression on the future film director and influenced his imagination. Anwar’s Satan’s Slaves are produced by Rapi Films – an Indonesian film production company set up in 1968 but its heyday came with the 1980s exploitation films – so the remake remains close to the roots of local horror film production.

Even though Satan’s Slave aged badly but it is still a rare gem among horror films, because it is grounded in Islamic taboos rather than the Christian ones and it draws from Indonesian folklore featuring creatures and stories quite different than the ones popularized through the Western horror tradition, although there are some points of similarity.

While watching Satan’s Slaves, it is hard not to think about Rosemary’s Baby, because of the fertility cult motive and late 1960s early 70s stylization. Nevertheless, the horror stories in Indonesian folklore are often connected to fertility and childbirth, such as toyol – dead human fetus controlled through black magic – or pontianak – Southeast Asian vampires that are said to be the spirits of women who died while pregnant. Joko Anwar often used the motives in his previous movies, but Satan’s Slaves is the first one, where the narration also mentions Islamic taboos, as a reference to the 1982 original, but the remake does not make it a point of focus.

Joko Anwar in Satan’s Slaves bows to 1980s Indonesian cinema, but also to the Hollywood classics. Firstly, the film director himself stars in the role of music label manager, hinting on Alfred Hitchcock’s own cameos, that became the author signature in the films he directed. Then Joko Anwar draws from the 1970s and 1980s American horror films, most notably The Omen through the figure of a mute child, The Exorcist reflects through the scenes showing the bedridden mother and strangers standing in the mist holding the umbrellas. The ghosts and evil spirits talking through the media, radio or a gramophone, is reminiscent of the television set in Poltergeist (1982). Finally, there is a young couple, who solves the family mystery walking through the jungle forest as if it was another afternoon on Elm Street or any other American suburb filled with dark stories to tell. All these images are not merely imitative, but put into different cultural context once again move the viewer’s imagination, proving the film director’s ability to consciously use and combine different images engraved in the horror genre without them appear forced or obvious. The genre cliche props and sets like the wheel, old house, mirrors, old paintings, cemetery, even monsters such as the Undead, gain new life in Joko Anwar’s work.

Except for the gripping story and visuals, Satan’s Slaves is perfectly cast. Tara Basro as the oldest daughter, Rini, gives a great performance from the first scene when the camera goes up showing her face with a mixed expression of impatience, nervousness, embarrassment and a certain stubborn pride. Ayu Laksmi as the mother has a small role but very ambiguous and memorable, her face in silent fright does not tell if she is a part of the family or already turned into its enemy. Both of them dominate the screen every time they appear. 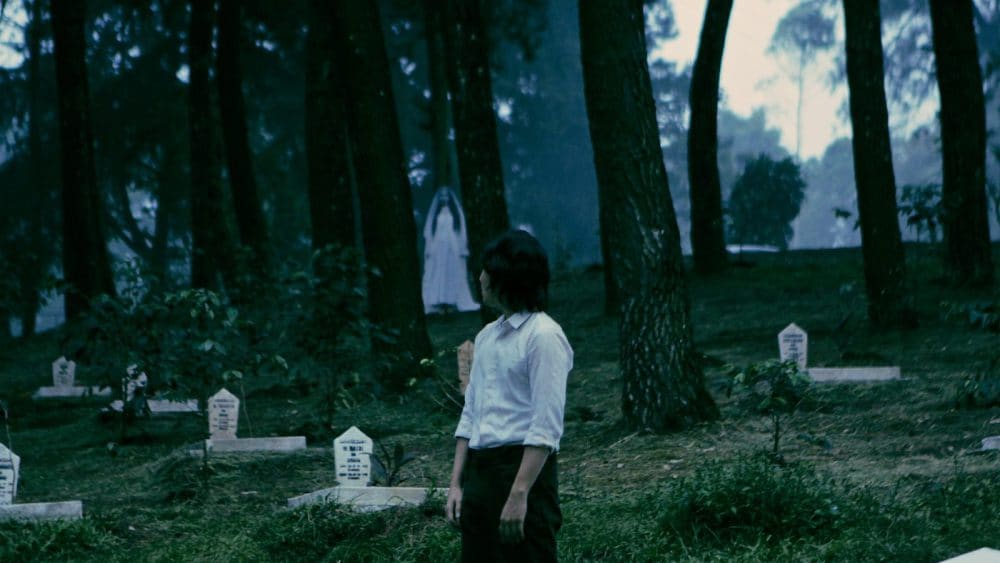 Music and the use of soundscape in Satan’s Slaves is also outstanding. Songs performed by The Spouse serve in the narrative as the mother’s old hits, the eerie atmosphere of long gone 1950s/60s parties and peaceful decadence, except when Rini finds out there is a recording of the satanic cult on vinyl.

Satan’s Slaves combine classic iconography and motives with local folklore and landscape, resulting in story that has a lot of potential for a sequel. Muslim graveyard looks frightening even during the sunny afternoon, so Joko Anwar does not have to look far for more great material for the film.