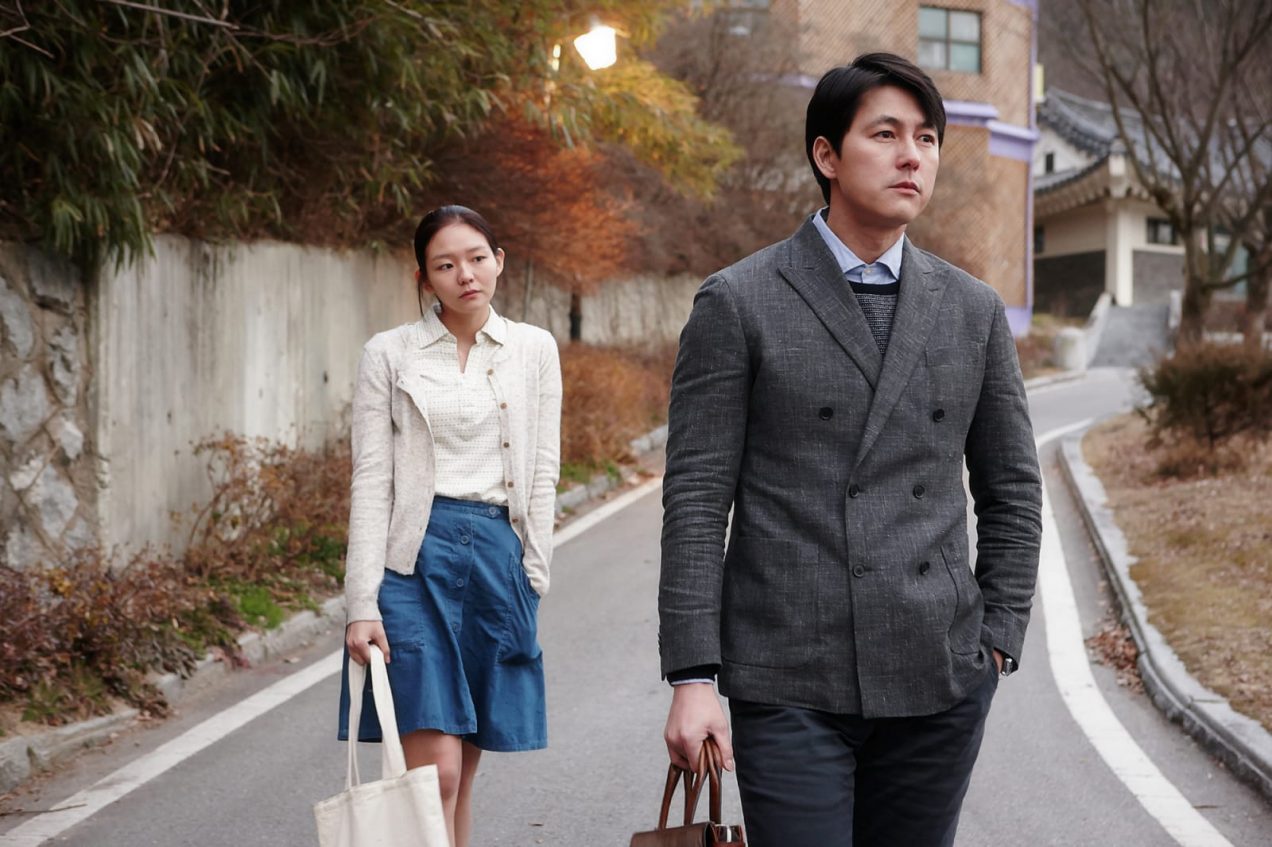 Scarlet Innocence sees director Yim Pil-sung returning with his first full feature in some seven years, following up his 2007 horror Hansel and Gretel with another modern take on a traditional fable, in this case the famous Korean folk tale of Simcheong. Teaming with popular leading man Jung Woo-sung (The Divine Move) and upcoming actress Esom (Behind the Camera), Yim puts a contemporary and sexually charged spin on the classic story, in which an affair between a professor and a vulnerable young woman has destructive consequences.

Jung Woo-sung plays respected literature professor Ha Kyu, the film opening with him leaving Seoul and heading to a small town to teach while a scandal involving a student blows over. He’s soon in trouble again when he meets Deok Yi (Esom), a beautiful, naïve young woman who he finds impossible to resist, and the two begin a torrid affair. Before long, Ha Kyu is reinstated by his university, and he announces that he’s heading back to the big city to resume his old life and to re-join his wife and daughter, devastating Esom, who was clearly hoping for a proper romance. The film skips forward eight years, with Ha Kyu now going blind and living with his daughter Cheong (Park So-young, Red Family), who blames him for the suicide of her mother. Now calling herself Se Jung, Deok Yi reappears and moves in next door, insinuating herself into his life as part of a ruthless revenge plot.

Lolita and femme fatale themed tales of dangerous sexual obsession are common enough in Korean cinema, though as might be expected with Yim Pil-sung at the helm, Scarlet Innocence plays out a little differently. While it starts generically enough, the first act charting Ha Kyu and Deok Yi’s fling ventures into some more interesting moral territory than usual, with him being a conflicted, manipulative figure, and her being an odd mix of the innocent and the aggressively seductive. With both behaving in a desperate manner, their dynamic is tense and uneasy, and though Ha Kyu’s abandoning of her is predictable enough, Yim successfully mines it for trauma and tragedy – despite neither being particularly likeable, Ha Kyu and Deok Yi are believably flawed human figures, and their shifting relationship makes for gripping viewing from early on.

Things get even more interesting after the eight year narrative leap, Yim taking the film in a distinctly noir direction, though again avoiding the usual kind of straightforward genre and gender roles. While Deok Yi’s vengeance is justified to a point, her schemes gradually elevate to the distastefully sadistic, trying to ruin not only Ha Kyu’s life, but his daughter Cheong’s as well. As such, the film eschews crowd-pleasing payback, the story and its power struggle of a central relationship instead seeking catharsis through very different means. Self-realisation and forgiveness become key, and the film builds towards a satisfyingly spiritual, though darkly ironic conclusion that befits such a tale of broken souls.

Visually gorgeous and atmospherically shot by Yim, the film is very much driven by its two lead performances, Jung Woo Sung and Esom adding depth and emotion to what might otherwise have been cold, distant characters. As he did through his fantastic villainous turn in Cold Eyes, Jung Woo-sung again proves himself a highly versatile actor, and one capable of adding charisma and intensity to unconventional protagonists, while Esom, who received Best New Actress nominations at the Grand Bell and Blue Dragon Awards for her work, is equally impressive in a challenging role. The chemistry and spark between the pair gives the film a crucial edge, ensuring that their catastrophic infatuation is convincing rather than just a gimmick.

Scarlet Innocence is another highly accomplished offering from Yim Pil-sung, a talented director who really should make more films. A provocative though substantial Simcheong update, the film is easily one of the best of its type from the last few years, and a fine showcase for the acting skills of its two stars.

Scarlet Innocence is available via YesAsia.