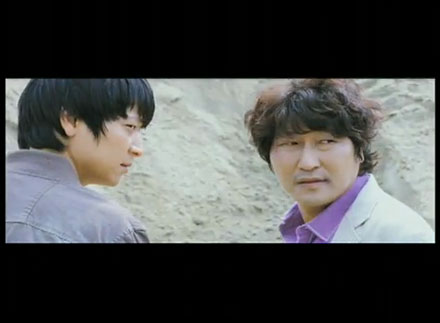 Lee Han-kyu (Song Kang-ho, The Good, The Bad, The Weird, Thirst) is a hardnosed NIS agent tracking down a North Korean sect of assassins led by the notorious Shadow and his reluctant helpers, but his arrogance to get the credit for their capture leads to their escape and his dishonourable discharge.

6 years later Lee is running a private detective agency specialising in finding runaway mail order brides, when he bumps into one of the North Korean assassin’s, Song Ji-won (Kang Dong-won, Jeon Woochi: The Taoist Wizard, M, Duelist) and sees a chance to get back in with the NIS, offering Song a job. What he doesn’t know is that Song is himself disgraced as a traitor and no longer a part of any North Korean plot, and is playing along to regain his honour and see his family again.

Thus the pretext is set up for the two to work, and even live, together – but despite a rather serious, tense-sounding plot, Secret Reunion is far more a buddy comedy as two very different people inevitably grow to like each other. If anything, it rather quickly turns into a twisted version of The Odd Couple as divorced Lee’s messy bachelor ways, all dirty socks and a hamburger diet, collide with Song’s home-cooked chicken broth and, surprisingly, good-natured uncynical outlook.

Undoubtedly this a vehicle for Song Kang-ho’s talents, it’s built around everything Song does best, the humour, physical awkwardness and clumsiness, the one-liners, all underlined with a dramatic poignancy. At points the situations get very silly indeed, and it’s hard to think of any other actor, even outside of Korea, who would be so adept at pulling them off without it coming across completely false.

This is Song in ‘The Weird’ mode, the role he’s probably best known for outside of Korea. (Which is our loss! Can you believe The Foul King is still not available on DVD in the UK?) So it’s with some irony the plot itself is rather like a comic rerun of one of Song Kang-ho’s first major appearances, Shiri. (But at least without the terrible haircut he supported then – sorry Song, but it was pretty bad!) In this context, the North Korean assassin plotline feels rather ham-fisted and ridiculous to a point that almost devalues the films better intentions.

Director Jang Hun, in his second movie after the Kim Ki-duk scripted Rough Cut, does a fine job, though those expecting an action film, as this is often billed, will find the pacing odd. Though Jang does a good job, particularly in the early scene at the apartment block, where Shadow carries out his merciless hit on an ex-patriot and his family – rather reminiscent of sequences from Hong Kong filmmakers like Johnnie To (Breaking News) and Benny Chan (Divergence) – that is, of course, not what this is about.

Yep, it’s Song Kang-ho’s show alright, but who cares? Unsurprisingly this has been a massive hit in Korea, so let’s hope it makes it to the UK in some form or another. Damn enjoyable!

Secret Reunion was screened as part of the London Korean Film Festival 2010.