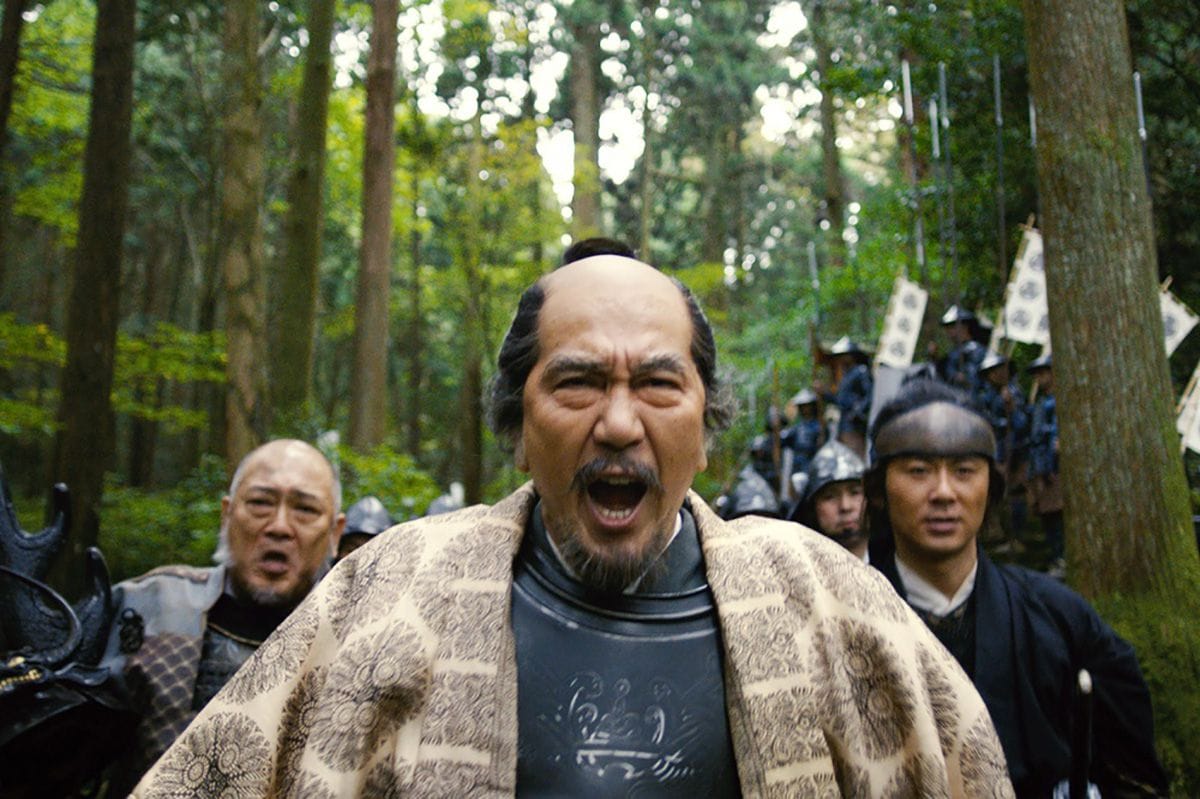 War. As the lyric goes, it’s not good for anything. For Ishida Mitsunari, war is not what the world should be about. A loyal officer in 15th century Japan, he is forced to take up arms against a rising power that will perpetuate the system of injustices he came up through. Less about the actual goings on in a historical sense, Sekigahara is both the name of the film, the battle and the place where Mitsunari is led to by his decisions and actions.

After watching Masato Harada’s Kakekomi, I found myself staring at the credits for this and realising it was the same director. Two films you could not find more different in their tone and approach. Whereas the former film was about internalised struggle and external threats to three particular women in a 19th-century temple for women, Sekigahara is all about pomp and circumstance, political manoeuvring, moments of chance and luck and about two men with radically different ideas about how to rule Japan. Mitsunari (Junichi Okada) is a retainer for his master Toyotomi Hideyoshi. He is found by Toyotomi one day in a temple and, following an interesting back and forth, is made a ward of the warlord and taken with him. When Toyotomi starts to decline in power, his other retainer Ieyasu Tokugawa (Kōji Yakusho) starts to consolidate his power. Mitsunari is a loyalist to Toyotomi and wants to do away with the injustices that his own master oversaw. To him, Tokugawa is just more of the same. The vice, the privilege and more will flow again under Tokugawa. For his part, Tokugawa is a man of honour but is vicious and conniving. To him, Mitsunari is the man he must defeat to become the warlord he has been becoming since he was a young man.

Now, the film plays somewhat fast and loose with the facts of the case. In the case of at least three characters, there is no historical basis for their being there. They are plot devices to help move the film along. As to the historical figures, again there’s a loose element at play here. We don’t know exactly what was said to whom in private chambers or conversations. So the film fills in the gaps and gives context to the pivotal moments that actually happened. What is known is that on October 21st 1600, two forces met on the field of battle at Sekigahara in what is now the Chubu region of central Japan. One was the forces of Ieyasu Tokugawa and the other the forces of Ishida Mitsunari. The film cleverly divides in two, starting with the lead up to the battle and then the second half deals with the battle itself. The battle was won by the forces of Tokugawa but that’s not really a spoiler. It’s how we got there that the fun of the film is found. 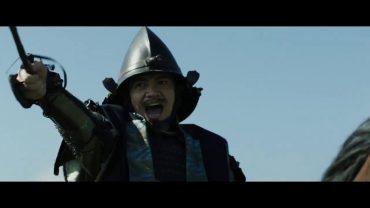 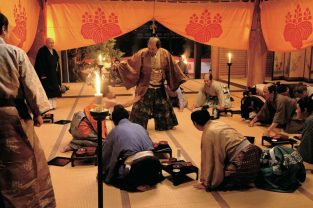 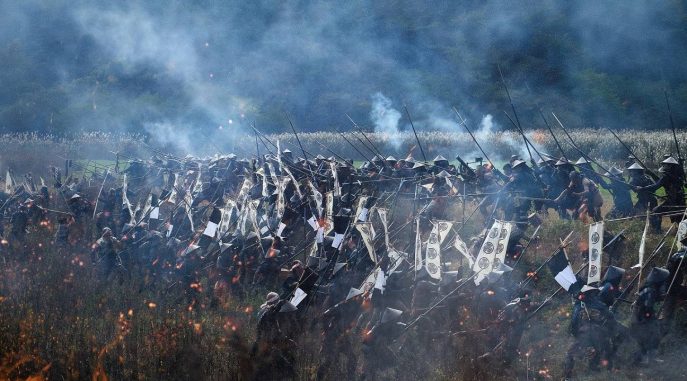 Harada’s direction of the film is both confusing and exhilarating. There are so many people in this cast that you need a scorecard to keep track. I’ll try to keep my observations to a minimum on the cast. My favourites on Mitsunari’s side are Hatsume (Kasumi Arimura), a young ninja rescued by Mitsunari from death after she sided with a lord Toyotomi had executed. Hatsume is a fictional character, both the eyes and ears of her lord and his love. Hatsume is forever coming up with ways to escape, disturb and thwart Tokugawa’s forces. She counsels Mitsunari, is by his side always and never lets him down. Arimura spends her time with a restless energy, moving from scene to scene, cutting down her opponents and keeping her dialogue sparse. She is most effective in her solo scenes with Okada, where the two actors look, speak and act like they move with one purpose. Takehiro Hira as Shima Sakon, a renowned swordsman and general, is a great role and spends his time growling and scowling, the impressive scars on his face telling the story of a warrior who lives as he sees life. Wise in his advice, his skills on the battlefield make for some of the most energetic scenes in the battle itself. On the Tokugawa side, White Snake/Acha (Ayumi Ito) is the definition of poison. A member of the Iga clan of ninja, she inserts herself into Tokugawa’s court and does everything asked of her, including certain physical acts that are implied, and will do anything to help Tokugawa succeed. An ideological opposite of Hatsume (they’re from the same clan), Ito is so good that she never comes across as conniving as her boss but just as lethal. Masato Wada as Kuroda Nagamasa is a determined man who spends his time waiting for his moment to help destroy Mitsunari and his forces. All bluster, on the field of battle Wada is impressively able to project despite being surrounded by extras and explosions. As well as the cast, the film feels very slow in the first half but not in a bad way. Scenes play out so slowly that the cast actually has time in certain moments to look around as the camera cuts between shots as the next character finds a moment to speak. Harada’s direction of the actual battle is amazing, starting quietly as Mitsunari taking time to fix a small shrine near the field before battle commences and then like a roar, the film ramps up the camera moves, the drama, the dialogue as the battle turns, turns again and turns for its final time in favour of the victor. Explosions, roaring batteries of men running across the screen and music all make the battle feel important. As if all the scheming, plans, deals, double-crossing have all come to this and it will change everyone’s life when it’s over. If you’ve ever watched Braveheart, Glory, Gladiator or any films where a historical army fought another, there’s the same vibe. All the pieces are put together and then the silence before the marching and then running begins. When the two forces smash into each other, pay attention because the film doesn’t paint white hats on the good guys or black hats on the bad guys. But it’s a battle that you will figure out, thanks to the performances and Harada’s work, who lost what and by how much.

The film, however, belongs to Okada as Mitsunari and Kōji Yakusho as Tokugawa. Starting as begrudging vassals of their master, they start a war of slights, then openly conspiring against each other and then finally warfare. Kōji plays Tokugawa with a mercurial quality. At times politically minded, he spends much of the start of the film moving his pieces around. When he realises that Mitsunari won’t back down, the performance leads to very quiet moments of self-reflection and ones of open contempt for his opposite. As a warlord, his raucous laugh steals the scene as we know the next scheme is starting. As we learn about him, we see hints that he really wants to unite Japan like his former master and sadly, he won’t see the problems that Mitsunari can if he does make it to the top. But there’s a moment at the midpoint when he realised that Mitsunari isn’t just an obstacle to his rise, he’s the obstacle in his way. Kōji is really good in that scene, where his face is crystallised in the same moment when he delivers the line. On the opposite side, Okada is more than Kōji’s flip side of the performance. He spends his performance doubting himself but not others. His scenes are heavy with the foreboding that this must be done or what is he there for? Talking with Hatsume or Sakon, we find out that his vision for Japan is freer and more just, however, even he admits that this might mean he’s doomed to failure simply by being too pure. I don’t know how history would have panned out if he had won but Okada really did make me believe that upon winning the war, he would leave with Hatsume and travel the world.

Sekigahara is a good political movie, an excellent war movie and a fantastic performance from everyone involved. Films like this are always about the smallest details having the most impact and in the end, the little details make us sympathetic even to self-interested players like Tokugawa and self-doubting warriors like Mitsunari. If Harada keeps going, I’ll be looking forward to his next project, even if it’s not like this or Kakekomi, with great anticipation.