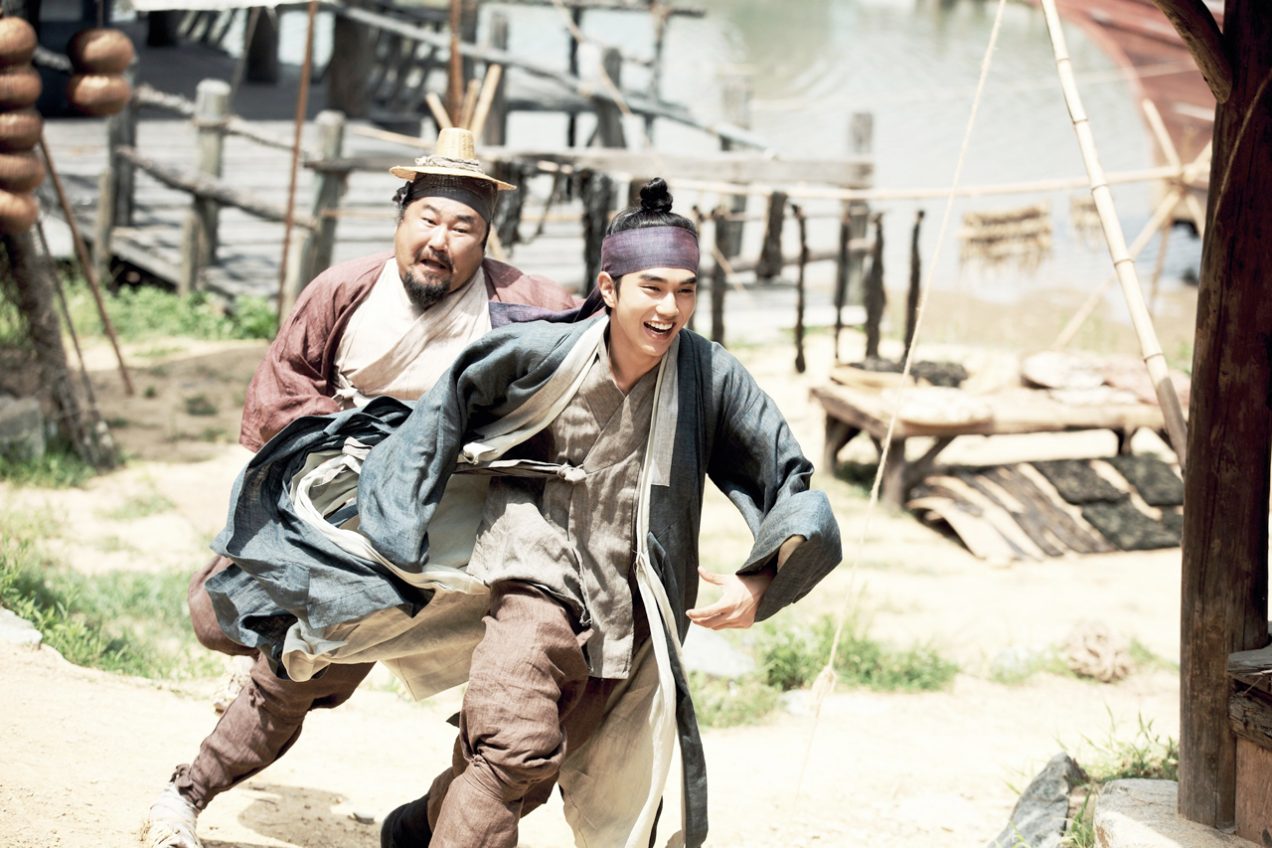 Writer director Park Dae-min finally follows up his popular 2009 debut Private Eye with Seondal: The Man Who Sells the River, an adaptation of the famous Joseon folktale charting the exploits of the titular rascal and conman. Previously brought to the screen by Han Hong-yeol way back in 1957, this new incarnation of the story stars Yoo Seung-ho (The Magician) in the lead role, joined by a supporting cast that includes Ko Chang-seok (The Con Artists), Ra Mi-ran (The Himalayas) and Cho Jae-hyun (The Fatal Encounter), as well as popstar Xiu Min (EXO), making his big screen debut.

After introducing its characters as they feign death during a battle with the Chinese in the north, the film follows young confidence artist Kim Seon-dal (Yoo Seung-ho) as he begins his shady career, joining forces with veteran fraudsters Bo-won (Ko Chang-seok) and Yoon Bo-sal (Ra Mi-ran) and the young Kyun-yi (Xiu Min) to form a gang, posing as monks in an attempt to sell off an astronomical observatory. Things go well, and their schemes grow grander in scale and more daring, with Seon-dal even disguising himself as the King as part of a bold plot to steal gold from the royal palace. Things become more complicated when he comes up with a plan to try and sell the apparently unowned Daedong River to the powerful and ruthless Sung Dae-ryeon (Cho Jae-hyun), upping the stakes and leading to dangerous times for him and his friends.

The main struggle for a film like Seondal: The Man Who Sells the River is justifying its existence in an already over-crowded market, period set comedy capers of its type having been flooding Korean cinemas for a decade or so at least. Park Dae-min seems to have been blissfully unaware of this, or perhaps simply didn’t care, as the main problem with Seondal is that it does very little indeed to try and stand out, being entirely content to stick to the usual formula, following its swindler protagonist around as he drifts from scam to scam before things rather abruptly take a turn for the serious, leading to one final outrageous con. Along with the comedy Park works in the expected and predictable romance, political shenanigans and some vague social commentary about greed and corruption, and the end result is that there’s really nothing here which hasn’t been seen several times before.

The same can be said of the visuals and production design, as though it’s a handsome film, there’s again very little here to distinguish it from others of the type. Despite the costumes and sets being suitably lavish and easy on the eye, there’s an overabundance of glossiness, the cast all being fresh-faced throughout, and this does detract from any believability – a touch of grittiness would arguably have gone a long way. To be fair to Park, he does get the most out of his budget, and the film benefits from some decent action scenes and passable CGI effects during later set pieces, which helps to distract from the over-familiarity of it all, as well as ensuring it gallops along at a fair clip.

What keeps the film afloat and saves it from mediocrity is its overall jauntiness and likeability, a sense of fun making it far more enjoyable than it might have been. Wisely, Park doesn’t seem to have been taking things seriously, and though a little more substance would have been welcome, the film’s lack of pretentiousness serves it well – even when things take the inevitable dive into melodrama, the film still retains a bright and breezy feel. The film is also one of the rare examples of comedy combining well with its other elements, and Park’s script is genuinely funny in places, for those viewers who enjoy slapstick at any rate, and while not exactly sophisticated, it’s all quite amusing. The cast goes some way to helping the film achieve its modest success, Yoo Seung-ho doing well in the lead role, keeping Seon-dal just the right side of smug, and there’s entertainment to be had in watching him don different disguises as he tries to trick pretty much everyone he comes across. The supporting players are all similarly on good form, and the film receives a definite boost from the fact that they all seem to have been having a fine old time.

Although this isn’t quite enough to make Seondal: The Man Who Sells the River memorable in the least, there’s enough here to mark it as a painless way to kill a couple of hours. Making up for its utter lack of originality through the charms of its humorous script and amiable cast, while it’s hard not to be frustrated by a talented writer director like Park Dae-min showing a lack of ambition, the film is nevertheless a perfectly reasonable offering for viewers not already tired of its ilk.

Seondal: The Man Who Sells the River is available from YesAsia.