As I’ve written before, Toei produced a series of grim period films, so-called zonkoku jidaigeki, in the early 1960s, an attempt to enliven the dwindling success of their trademark lightweight period spectacles. Most often these films were part of the shudan koso jidaigeki subgenre centering around the struggle of a small group of warriors against a superior force of cruel foes. 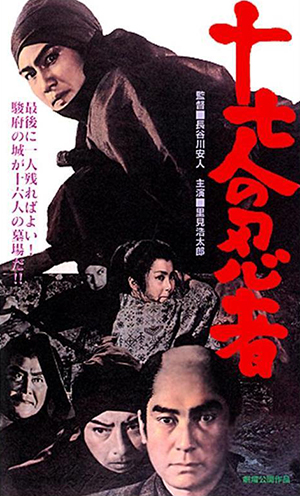 With the production of Seventeen Ninja, however, Toei managed to bring off a double coup. One year before, another famous production company, Daiei, had launched a new franchise: The eight-part Shinobi no mono (1962 – 1966) series featured jidaigeki idol Raizo Ichikawa playing several historic ninja characters over the course of Japan’s medieval history. Filled with dimly lit B/W visuals, surprisingly sophisticated storytelling and an atmosphere of misery and impending doom, the series presented a unique realistic take on the all too often idealized figure of the ninja.

Thus, Seventeen Ninja wasn’t just another grim shudan koso jidaigeki, but also Toei’s attempt to cash in on the great success of Daiei’s Shinobi no mono series. The result is a solid if not particularly memorable film, which seamlessly merges the bloodshed and desperate fight for survival of the “collective struggle jidaigeki” with the suspense-filled mood of the classical ninja film.

The central story presents itself as a fairly convoluted combination of factual and fictional historic accounts. After the shogun of Japan has passed away, his younger son, Lord Tadanaga, wants to take the throne for himself and authors a well-kept letter with the names of his supporters on it. While attempting to steal the document, Jingosa (Ryutaro Otomo), leader of the ninja of Iga, is caught by Saiga (Jushiro Konoe), himself another leader of a hostile ninja clan. Seeing that his clan is on the verge of destruction, the young Iga ninja Hanshiro Tsuge (Kotaro Satomi) teams up with the sixteen surviving members of his clan to free their master from his cruel imprisonment.

More important than the narrative, however, is the doom-laden atmosphere of Seventeen Ninja. Toei cameraman Motoya Washio skilfully imitates the stylistic patterns of Daiei’s Shinobi no mono series. With its candlelit interiors and almost expressive use of shadows, the cinematography creates a suspense-filled world of darkness much more akin to the classical American film noir than to the brightly coloured world of Hong Kong’s ninja exploitation films of the 1980s and ’90s.

Yet, while the visual tropes of the classical ninja film are in place, the screenplay fails to give its characters profound personalities to match the somber tone of the cinematography. Raizo Ichikawa’s ninja in Shinobi no mono were broken man whose tragic life stories gave justification to their brooding personalities. Kotaro Satomi’s main character in Seventeen Ninja also seems to be chronically depressed – yet, not necessarily because of his unfortunate back story, but merely for his own sake (or that of the grim tone of the piece for that matter).

In the end, this is less a failure of screenwriter Kaneko Ikegami than it is the fault of Kotaro Satomi’s bland portrayal of the character. An actor whose transition from cheerful heroes in many upbeat Toei period films to the more grounded and morally ambivalent characters in the zonkoku jidaigeki didn’t go as smooth as that of many other Toei contract actors.

In contrast, Ryutaro Otomo and Jushiro Konoe acquit themselves much better. Here, Konoe’s heroic antics in Duel of Blood and Sand give away to passive melancholy and resignation, while Jushiro Konoe plays the part of the villain with diabolic cruelty and slowly fading shades of honor. A year later, Konoe should play another villain in a ninja film, this time a masterpiece, Tetsuya Yamauchi’s brillant The Ninja Hunt (Ninja gari, 1964).

Director Yasuto Hasegawa, a low-ranking Toei journeyman director who usually provided low-budget second-slot programmers for double features, proves that he is capable of handling films on a slightly higher budget and delivers several moments of suspense. The best of them features a duel between Konoe’s character and a ninja hit man. Separated by two walls which are inclined to one another, both adversaries wait for their chance to strike…

A thrilling scene of great momentum in a film which otherwise relies way too much on melodramatic dialogues and rather obvious methods for generating suspense. Especially with its dependence on the clumsiness of the ninja characters in the film’s many scenes of stealth, Seventeen Nina borders almost on the ridiculous. It’s certainly noteworthy that if the “legendary” group of Iga ninja always acted so clumsily on their missions, it was purely their own fault that the clan has shrunken to such a measly seventeen members.

Despite of the films shortcomings, Seventeen Ninja proved to be relatively successful at the box-office and even spawned a sequel, Seventeen Ninja 2 – The Great Battle (Jushichinin no Ninja: Dai Kessen, 1966), three years later as well as a television remake in 1990. In conclusion, Seventeen Ninja may not be quite on par with Toei’s best zonkoku jidaigeki, yet provides solid entertainment for the more sophisticated ninja aficionado with a taste for a realistic approach to the legendary shadow warriors of medieval Japan.