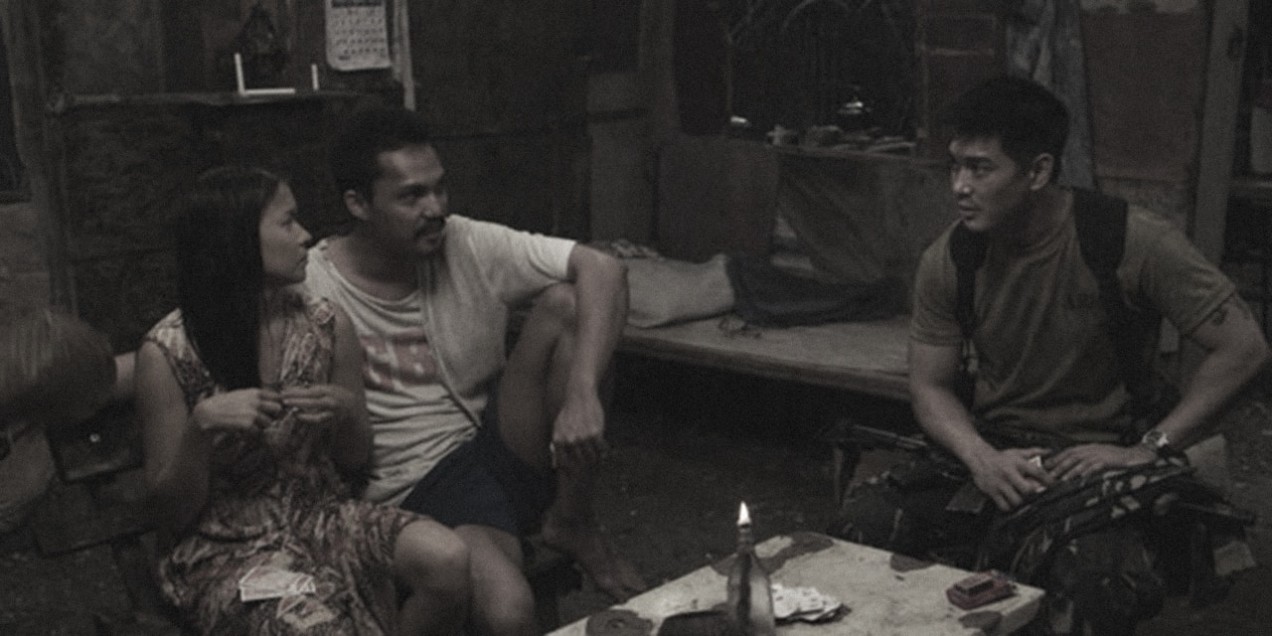 Set amid the social and political chaos of the early 1990s,  Shadow Behind the Moon, plays out as a taught, one set drama between three actors played out in real time. Jun Robles Lana is a playwright and screenwriter who turned to directing in 2006 with Gigil. Best known for Bwakaw and Barber’s Tales, his work has made quite an impact internationally on the art-house festival circuit, but like many working in Philippines he divides his time between both commercial and independent projects, with a long and successful career in television, including telenovelas, and the upcoming ghost film Haunted Mansion. So reliant on its stars, LJ Reyes (Tiktik: The Aswang Chronicles, The Janitor), Luis Alandy (Islands, Wildlife) and Anthony Falcon (Violator, REquieme!), Lana comes up trumps with a gripping two hours.

As a lunar eclipse casts an appropriate blood moon over a refuge camp in Marag Valley, an area of the northern Philippines where the military fought the pro-communist New People’s Army, an unlikely card game takes place between a refuge couple Emma (LJ Reyes) and Nando (Anthony Falcon) and soldier Joel (Luis Alandy) who should be on opposite sides. Having helped them on arrival, the trio have stayed friends, despite quips about suspicions that they might in fact be rebels. But as Nando leaves to fill a pail of water, it’s revealed that Emma and Joel have long been having a torrid affair, taking advantage of Nando’s absence. But as the eclipse envelopes the night sky, tensions surrounding participant’s real motives rise with the sweltering heat, as layer upon layer of duplicity is revealed, and the film leads towards it’s shattering conclusion.

It’s perhaps not surprising to find that Shadow Behind the Moon began life as a play Lana wrote over a decade ago; the dialogue is fast and intelligent with flashes of wit; such notions of deception and character revelations familiar motifs. At points, the remote cabin feels perhaps obviously on a soundstage, and yet the film is never stagnant. It’s largely due to the skilful staging of the production. Incredibly well orchestrated, this one-shot style (in fact it’s five shots, but impossible to tell) shows Lana’s intent to elevate this above the original play. Rather than staged at a distance, we are thrust right into the action – thanks largely to the energy that DOP Carlo Mendoza (Boy Golden, Bwakaw) brings to his cinematography – almost becoming a participant in this story.

The film is presented in 4:3 ratio; shot to look as if shot on a video so degraded that colour has almost bled out of the image. In some ways the effect, applied in post-production, seems a little distracting. It doesn’t really add anything to the story, but I suspect what it leaves out also gives the film some of its strength. The finished film may have felt too glossy, or even like a telenovela, in those original vibrant colours. Apart from anything else, it proves in an age where we’ve become obsessed with 4K-resolution and Blu-ray quality, a film can still be totally engrossing without it.

With such great material to work from, the performances are among the best I’ve seen in a Filipino film, even when the melodramatic twists and turns of the script are a little hard to take. Just the physicality of the production, flipping from intense dialogue to passionate sexual encounters, is impressive. Lana shows us a recent history of a Philippines divided, both sides as twisted as each other. It’s a world away from the romantic comedies and horror films the country is best known for, and we are better for it.

Shadow Behind The Moon screens at the 9th Five Flavours Film Festival 2015.