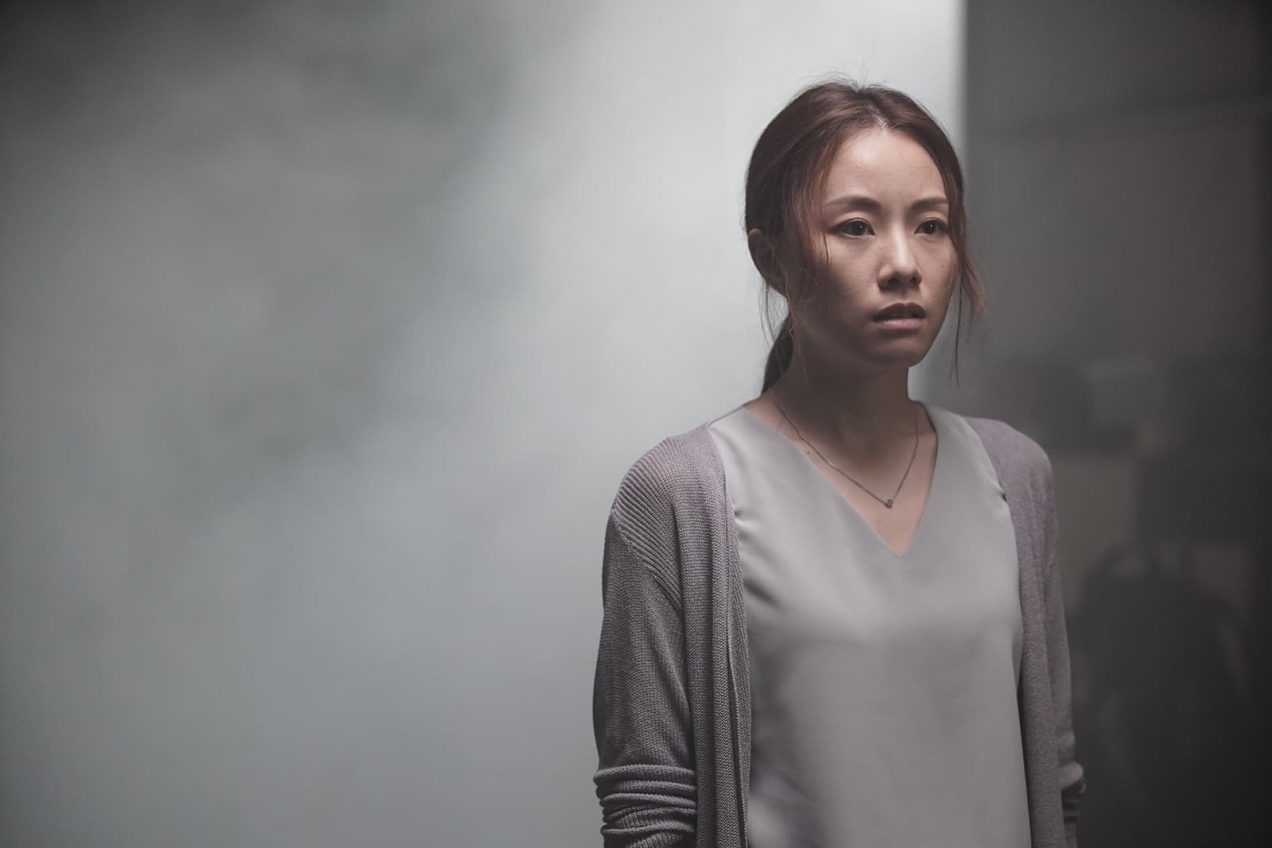 A busy psycho-thriller with a mite too much on its plate, still carried well via its characters…

Not too many people could’ve guessed the directions Stephy Tang’s career would take over the years. After all, she started as part of an unabashed teenybopper 9-member Cantopop group called The Cookies (later crumbled down to the 4-member Mini-Cookies). She’d make the almost inevitable transition to acting (as happened with HK music stars) even faster than most — mere months later in similarly bubblegum fare, starting with Cookies vehicle Nine Girls and a Ghost. But her films and roles (along with her music) gradually got more serious and significant over the years, to the point that she’s become one of the more respected actresses known for putting a lot into her roles. In the last few, she’s gotten multiple awards and nominations for 2017’s The Empty Hands and 2019’s My Prince Edward — but still had time for (also previously unheard of) occasional exploitation shenanigans in Husband Killers. But Tang reported her most taxing role yet to be her most recent in Shadows.

Dr. Tsui Hiu Ching (Tang) is a forensic psychiatrist mysteriously gifted/cursed with the ability to see into the subconscious of others in vivid detail. So after an odd but grisly case of murder by trophy where a highly awarded former social worker kills his whole family with his honour then attempts suicide, Dr. Tsui seeks answers about the perpetrator’s mental state. Also seeking answers is police detective Ho (Philip Keung, Trivisa, Tracey) — but far more simple ones, summing up his outlook as simply as can be with, “The law exists for a reason.”

When Tsui is called for a psychological assessment of the suspect’s sanity, after listening to the highly disturbed man she inconclusively concludes, “A voice keeps telling him to kill, but I’m not sure it’s his.” That immediately sets her at odds with Ho, as he hates thinking anything about criminal psychiatry or the abstract, rejecting her notion there could be more to the investigation. He already has enough to worry about between his burdensome job and taking care of his little girl Dao-Dao (Kiera Wang) by himself. 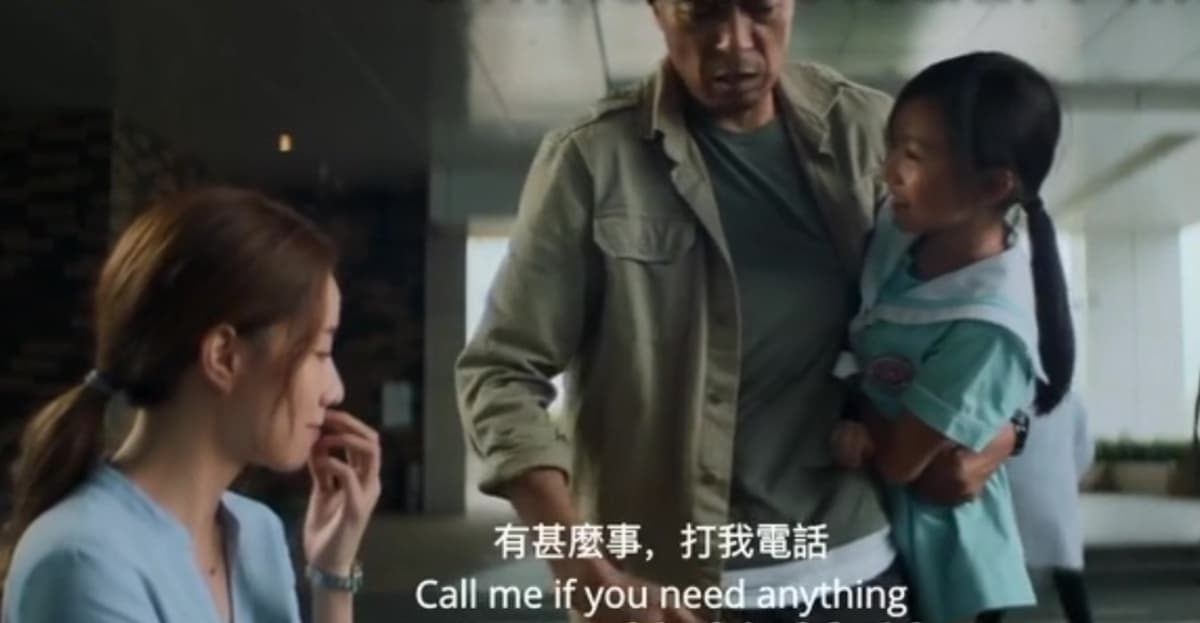 Tsui’s suspicion drives her to check the suspect’s record; namely his previous psychiatrist, Dr. Yan (Gardner Tse, Drifting), who she quickly gets into a philosophical clash with. Dr. Yan plainly suggests that everyone has an inherent dark side that’s easily triggered within a human race that’s selfish by nature. Tsui rejects that notion, however, insisting on seeing the inherent good in people. But Ho is also highly dismissive and disliking of Dr. Tsui’s idea of checking the psychiatric footprint (or I suppose, mindprint) or Dr. Yan’s patient history. But once Tsui’s cerebral detective skills are put to the test and really hit home, Ho is forced to acknowledge that she could be helpful in the case and gives her a chance to guide an investigation most peculiar. 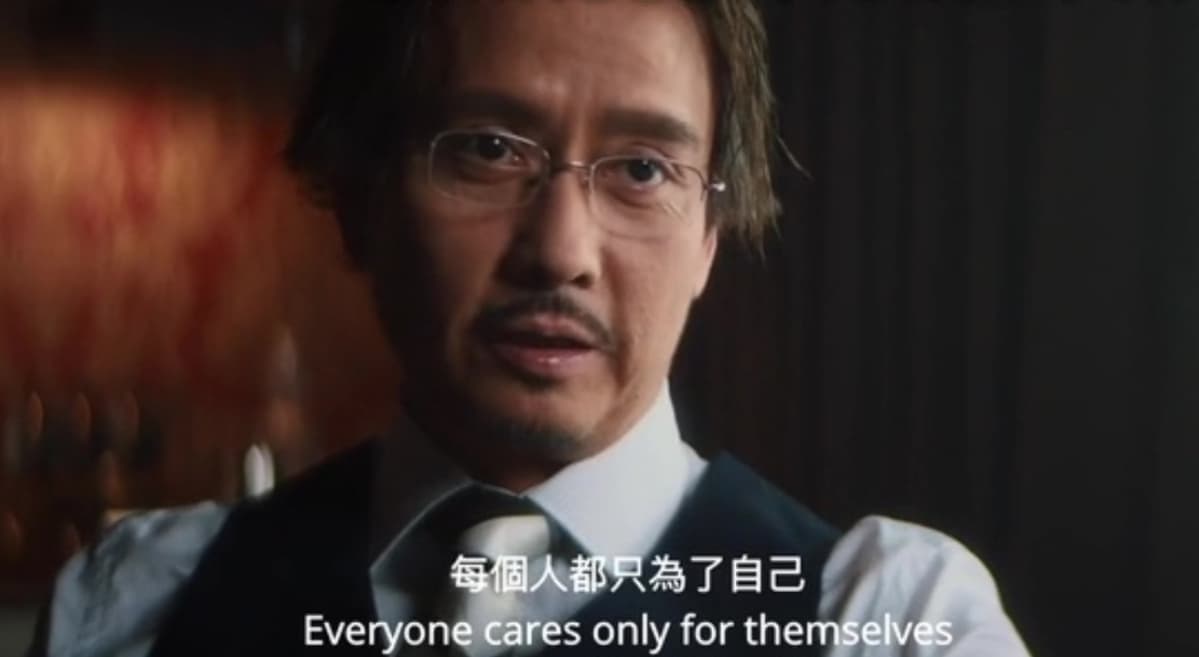 Unless it’s quite the coincidence, Shadows seemed to be at least partially inspired by the massive success of the previous year’s Beyond the Dream. Both films have female protagonists determinedly doing research on the mentally ill (differences being psychologist vs psychiatrist, grad student vs professional) and both have extensive discussion and thematic focus on abnormal psychology. Both even have key scenes featuring the protagonist in two simultaneously perceptible “forms”. But while Beyond the Dream was a somewhat exaggerated portrayal of real issues that was nevertheless primarily and deeply concerned with them, Shadows is a far more embellished mainstream crime thriller primarily using its thematic material to bolster its thriller elements. In that way Shadows is also following in some of the footsteps of earlier psychology-themed HK popular cinema like Johnnie To’s 2007 Mad Detective. 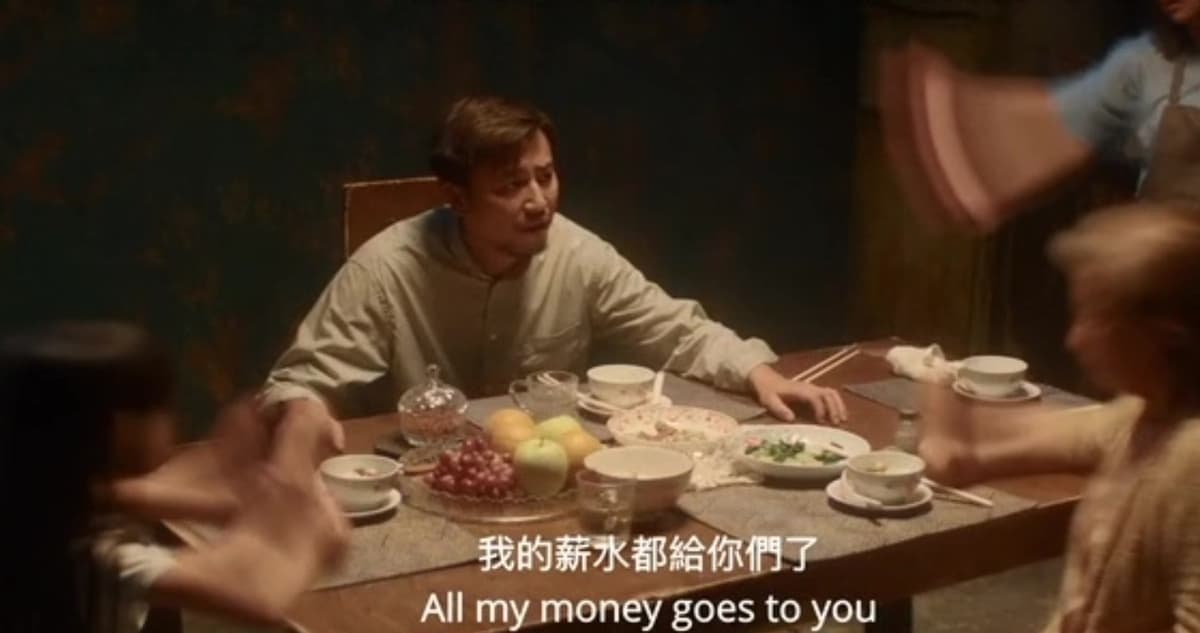 But Shadows doesn’t feel too familiar. Being the Hong Kong debut of Singaporean director Glenn Chan — who’s primarily worked in television — it’s not too surprising that Shadows often bears resemblance in presentation to TV crime shows. At times there’s overly-slick camerawork, editing and acting for the atmosphere the film wants as its prevailing mood, but generally it maintains an effectively neo-noir feel.

There are also pinches of horror and psychological horror, as Tsui’s unnatural ability takes her and the audience literally right into the thick of the action through other’s minds, allowing her to see past crimes in question right as (when) they take (took) place and the exact words and actions of the suspect during the event….But that’s still not enough to solve the case (with “solving” and “knowing” as separate phenomena), and can in fact sometimes further complicate it for not seeing the exact catalysts for crimes that were far from premeditated.

So while there’s a strong air of mystery about the story in terms of atmosphere, most of the main directions Shadows will take and who the real villain is isn’t much of a mystery at all (though the final big medium for the villainy is). Nevertheless, the movie builds good tension on an individual basis from its key scenes, and if it tried a little harder could’ve had deeper messages about the manipulation, neglect and prejudices towards the mentally ill. But we can leave that to more socially ambitious films, no?

The inherently hotheaded Ho and the (both naturally and by demands of profession) necessarily coolheaded Dr. Tsui — united only by their shared but very different varieties of conscientiousness — make for a droll little mismatch in what at times turns into a “buddy psychiatrist” movie. But it’s Ho who more often ends up essentially being Tsui’s sidekick (and Ho doesn’t like it, of course), tagging along and providing the muscle for what seem to be Tsui’s whims if not for the inter-cerebral readings and all. Ho has practical, professional and personal reasons alike not to want to accept the possibility or the very idea that responsibility and justice for a crime can lay fully beyond the crime itself and who commits it (like for starters, convenience, easiness of job, sleep and sanity). Ho just wants an open and shut case when Tsui keeps stuffing so much more into it that it can’t close! 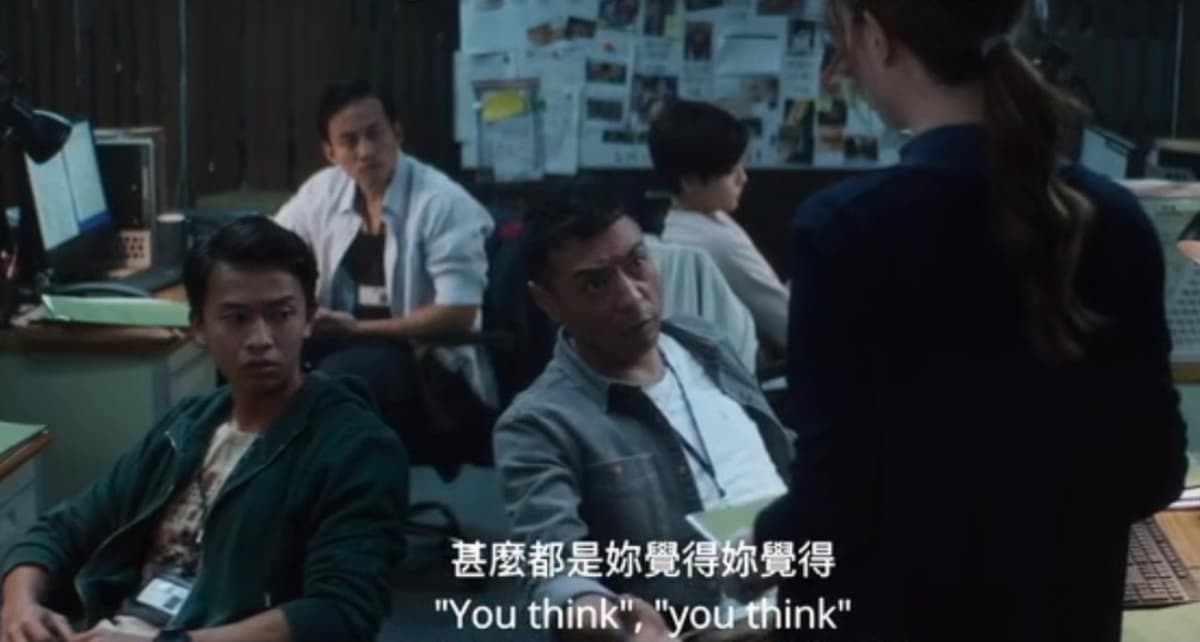 In fact, the interplay between the leads (also not forgetting little Dao-Dao) is Shadows strongest driving element overall. That also includes the clash of personalities and outlooks between psychiatrists. While the way the film contrasts Dr. Tsui’s unwaveringly humanistic bent towards psychiatry against Dr. Yan’s clinical, cynical type is undeniably fascinating in itself, it can also get rather straightforward and even cute in places (as Dr. Tsui so sunnily puts it: “Patients are like a blank canvas [needing] guidance from psychiatrists to fill their lives with colours.”). So while the questions raised are interesting and well-presented, much like the story’s main mystery the movie’s principal idea and conflict are too obvious. It’s an unusually heady theme to be worn on the sleeve, but it’s still being worn on its sleeve.

Funny enough, the movie itself is often considerably closer to corroborating its villain’s outlook on society. Many minor characters from the receptionist nurse [supposed to be] caring for the elderly at the nursing home to a “gang” of mothers chastising a teacher for not giving their kids harrowing enough homework (to jockey for elite school placement) are comically selfish/greedy/irresponsible. If nothing else, it keeps the film eventful.

If one can come to accept that its pretensions are indeed primarily surface dressing, and accept the journey itself rather than the mystery as the main appeal, they can also be able to appreciate Shadows as a worthwhile thriller sprinkled with supernatural, surreal and socially conscious touches.

“Do you really think I’m capable of influencing a grownup?”

Shadows screens as the closing film of Chinese Visual Festival 2021, London on Sunday 25 July. Find out more about the full programme and tickets now.

Even more than Beyond the Dream (if not for the closeness of time and location), this film actually brings to mind Gakuryū Ishii’s 1994 エンジェル・ダスト Angel Dust. That film also happened to be about a female psychiatrist with paranormal abilities to explore the minds of others who the police also happen to seek cooperation from in a case that also happens to end up bringing her at odds with a fellow psychiatrist. But for all their thematic similarities, the films are very different in nature (with Angel Dust being in a more avant-garde style with a futuristic setting).