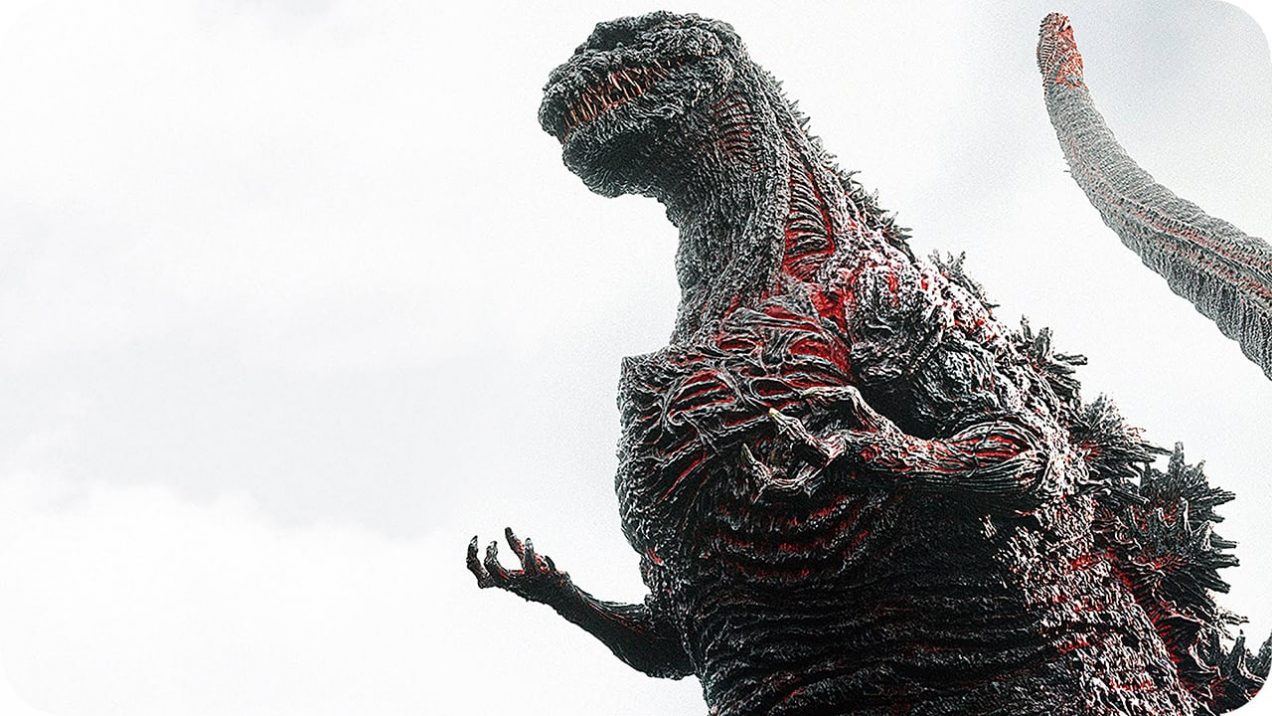 The king of the monsters makes a grand entrance once again…

It is incredibly hard to believe that there are THIRTY ONE Godzilla films in existence. And the premise of all of these films is about a giant creature roaming through large cities, causing havoc and destruction. How can you stretch that to 31 films? James Bond hasn’t even reached 25 films yet! What makes Godzilla so special? A lot of people say it’s what Godzilla represents. Sometimes, he represents the mistakes that Japan has done like in the original film that involved nuclear bomb testing that brought back memories of Hiroshima; a parable of the mistakes of humanity.

While others love Godzilla so much because the franchise delivers exactly what it promises. Mindless chaos and destruction that must be seen on a cinematic scale. Or getting drunk off your ass due to its cheesy execution, it all depends on the entry. Throughout the years, the Godzilla entries have changed the perception of Godzilla to the point that it became campy and made the star an anti-hero that fought other creatures, therefore saving the world.

In the case of the latest entry, the film goes back to the roots of the original by bringing back memories of the 2011 Tohoku Earthquake and Tsunami. And to add to that, we have Hideaki Anno (creator of Neon Genesis Evangelion and director of camp classic Cutie Honey) and Shinji Higuchi (director of Attack on Titan films) co-directing and you got a lot of talent lined up. Does Shin Godzilla live up to the massive expectations?

The film starts off in a day like every other day, until a strange body of water moves within the bay, which causes some panic with the locals. With government officials assuming that the occurrence was caused due to volcanic activity, Rando Yaguchi (Hiroki Hasegawa), a young deputy believes that a large creature is the cause. But before the officials could come up with a conclusion, Yaguchi’s predictions come to life as a giant creature rampages through the city, causing havoc and destruction within its path. As the government declares a state of emergency and tries desperately to save the citizens, Yaguchi hires a team of supposed “nerds” and “outcasts” to study the creature’s weaknesses and formulate a plan to stop it. But with very little time and a high amount of democratic red tape to sift through, the chance of chaos is becoming more and more imminent.

As you can probably tell from the synopsis, it seems that Shin Godzilla will play out almost exactly like every other Godzilla film: Godzilla appears, massive panic, people formulate plan to stop Godzilla, plan succeeds, end credits. But with Hideki Anno at the helm, you can expect something different and I am happy to report that Shin Godzilla succeeds wholeheartedly. The film surprised me in more ways than one and as soon as I left the cinema, I wanted to watch it again.

First off, Godzilla itself is a grand sight to behold. The film goes backs to the basics to make it scary and menacing again, unlike the campy entries. The minimal screen-time, the less-is-more approach, it’s all here. But unlike the 2014 entry which short-changed Godzilla to the point of being in a supporting role (thanks to the direction and the major focus on the other creatures), Anno makes Godzilla the main focus of the film.

Anno changes the origins of Godzilla and it is quite inventive to witness. I cannot wait to see ideas of it to be explored further if a sequel ever happens. I don’t want to spoil it for people who haven’t seen the film but prepare to be surprised when you see Godzilla for the first time. The portrayal of Godzilla is also a nice change, as it is portrayed as a force of nature than an actual antagonist. Even the characters in the film admire the creature just as much as they fear it. There are some nice touches to Godzilla that adds to the portrayal like when it “attacks”, it never feels like an attack, but an act of fear i.e. the atomic breath.

As for the city-wide destruction scenes, they are beautifully orchestrated and will definitely send a chill to one’s spine. No doubt, scenes of the destruction that are reminiscent of the 2011 Tohoku Earthquake and Tsunami will stir up some people. A scene at night with Godzilla executing his iconic action after provocation from outside forces is still tattooed into my brain. Speaking of tattooed images, the final shot of the film is also an image that I would never have thought to see and it just has me psyched for a sequel to see the themes and ideas more developed and thoroughly realized. It is just that haunting.

As with many Godzilla films, characterizations of the humans are in short-supply but in the case of Shin Godzilla, it seems that the filmmakers know of this flaw, so they just jam-pack the film with a boatload of stars/character actors and it is a lot of fun to spot them, if you are familiar with the Japanese media. I have to admit seeing director Shinya Tsukamoto (who directed the cult classic Tetsuo franchise) playing a character who admires Godzilla got a big smile out of me.

As much of the bounty of actors that we see, there are only two actors that stand out: Hiroki Hasegawa and Satomi Ishihara. Hasegawa has always been a dependable actor who is very versatile (like playing a crazed director in Why Don’t You Play In Hell; to playing a revered soldier in Attack on Titan) and he makes an impression in Shin Godzilla. Emblematic of perseverance and strong will, Hasegawa portrays Yaguchi with utter seriousness that it makes it easy to support and sympathize with his character.

In the case of Ishihara, she stands out due to the fact that her character is essentially a dry joke. Playing Kayoko Ann Patterson, the “American” of the film, she seems to be having a lot of fun with her performance. The way she moves (in comparison to the stiff government officials), the way she talks (the stilted English delivery and dialogue), her motivations (she wants to become President of the United States) and even the way she dresses (There’s a joke about her choice of wardrobe when we first meet her), her character comes across as a joke and I think Anno intended it to be that way. There are much better Japanese actresses who can play the role, especially with the English language (like Yoshino Kimura) but would she had stood out as much as Ishihara did? I doubt it. She’s basically the Raymond Burr of Shin Godzilla, and it delighted me to no end.

Speaking of delight, a big surprise of the film was the amusing satire of the government. its bureaucracy and even its foreign relations. Meetings are held over and over for decision approvals and sometimes decisions are reneged and therefore, another meeting must be held to approve the reneging. It may sound tedious and repetitive, but the way Anno executes it, it comes across as dryly amusing, especially when you encounter the over-seriousness of the actors’ performances. There’s even a scene Anno also employs musical scores from Neon Genesis Evangelion (thanks to Shiro Sagisu and Akira Ifukube) to a thrilling effect that makes the deliberating scenes more swift as well as gives a punch to the action scenes. He even films the deliberating scenes in strange ways (like a shot seen through a chair that is being pushed) that reminded me of his live-action film debut, Love & Pop.<

The subtitles (which has come an annoyance for many) explicitly state the occupations/ranks of the characters that appear on-screen as well as their names during dialogue scenes. They also apply to the locations of the film as well. As for the locations, the film cuts to many to show the spanning destruction that Godzilla causes, but funnily enough, there’s a part where Anno cuts to a location where nothing happens and stays there for about ten seconds then cuts to the government officials. I don’t understand why it’s there, but it did make chuckle due to the perfect timing of it, as the tension of the preceding scene is meant to dissipate at that point.

In the case of the ranks, they are never meant to be of importance to the story, but it can be seen to convey the amusingly sharp obliviousness of the government and its hierarchy and who to rely on for a sense of authority and well as autonomy. There’s even a character whose name and rank is shown, yet we never see his face! In an odd fashion, there’s a cameo of actress Hairi Katagiri as a janitor whose character’s name and rank never shows up, despite the fact that her few lines of dialogue make a bigger impression than the others do. There was a nice touch with the ranks as the character of Yaguchi has his rank shown a few times throughout the film until the final act, where it is seen that he has achieved a promotion. One hilarious throwaway joke involves the Americans and the name of Godzilla that had me laughing out loud.

Shin Godzilla lived up to the buzz and exceeded my expectations in every single way. Just as I was afraid of the overly talky scenes, Anno punches it up with a much-needed satirical and topical humour. Just when I thought Godzilla wasn’t going to live up to its reputation, Anno executes its presence spectacularly. And just when I thought successful reboots were a dime a dozen, Anno proves me wrong. I absolutely enjoyed this film.

Shin Godzilla is currently in cinemas across Australia and New Zealand, released by Madman Entertainment.