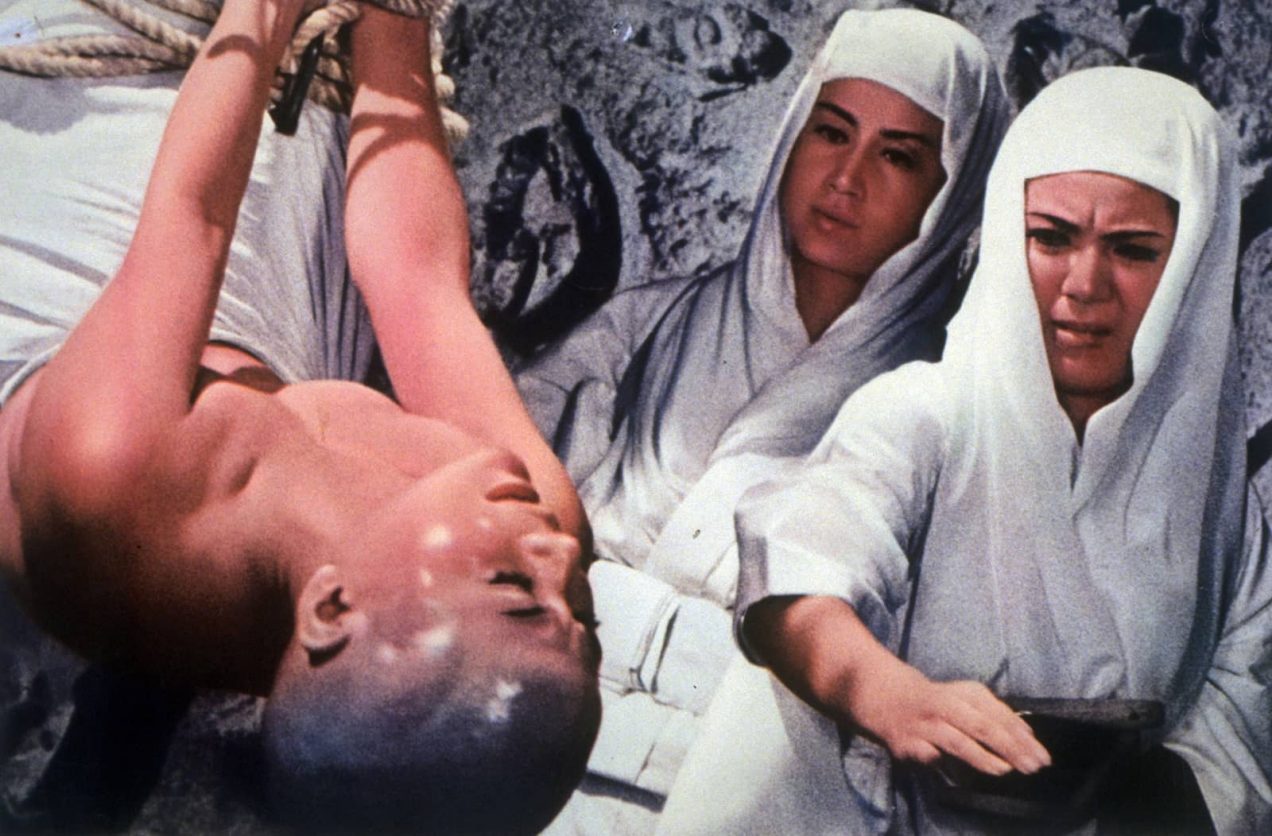 The seminal piece in Ishii’s torture series does not disappoint…

The seminal film in Teruo Ishii’s torture series, Shogun’s Joy of Torture offers an omnibus of terrors, all dedicated to the exquisite art of torture. Set in the Tokugawa era Japan, it depicts these horrendous acts of violence in beautifully shot period setting, with amazing attention to detail. It is without a doubt one of the best films in the series, and something that anyone interested in Ishii’s torture series should check out.

The film consists of three tales of crime and punishment, in which women always end up pulling the shortest straw. In the first story we meet Mitsu (Masumi Tachibana) whose brother Shinzo (Teruo Yoshida) has been badly hurt in a workplace accident. To pay for the much-needed medical care, and much to her brother’s horror, Mitsu must surrender herself to the advances of a local kimono shop owner. Complicating the matters further is the brother and sister duo’s incestuous relationship that they desperately try to keep secret from the rest of the world. Such circumstances are naturally rife for tragedy and in the end, it is Mitsu who will bear the brutal consequences. The second story takes us to Juko Temple where a new abbess, Mother Reiho (Yukie Kagawa), has just arrived to take her position. All hell breaks loose when Reiho finds one of the nuns having a lustful love affair with a monk from the neighbouring temple, and in her sanctimonious jealousy, embarks on a torture campaign that puts many professional sadists to shame. On the last segment we are introduced to the competitive world of tattooing as the best tattooist in Edo, Horichô ( Asao Koike), attempts to better his torture themed works by first drugging and kidnapping a virgin with “perfect skin”(and tattooing her against her will), and then making friends with a shogun’s torture master in order to get better research material for his work. Ever the dedicated artist, Horichô throws himself deep into the world of torture, with grim repercussions. 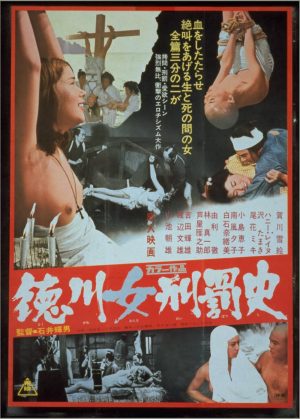 The film starts with a strong opening of women being executed in the most graphic manner, giving us a little taste of what is to come. With the viewers hopes suitably up, it then takes a small pause in the brutal proceedings as the first of the gruesome trio is also the tamest, with very little torture actually taking place. It is not a bad story as such but does offer a somewhat subdued start for the film and might make some viewers wonder whether the film’s reputation is nothing but outdated hype. However, things do move quickly on as we enter Juko temple and the repressed world of religious order. The torture techniques the sadistic nuns enforce are as imaginative as they are horrific. From being forced to bathe with a tub full of leeches, to hot chilli peppers being shoved into bodily orifices where they have no earthly business being, they are enough to make even the most hardened horror fan uncomfortable. The last segment kicks up the brutality another notch, with a large part of it consisting purely of women being tortured in numerous different ways. It may lack slightly on the plot department, but for those looking for the infamous torture scenes, this portion of the film certainly delivers the goods. What makes Joy of Torture stand out from many of its contemporaries, is the fact that the torture and execution techniques demonstrated in the film are historically accurate, giving the film a slight edge over works of pure fiction. For inspiration, medieval Buddhist Hell Scrolls, as well as the expertise of the famous S/M writer Oniroku Dan, were consulted, and as a result we have a truly hellish, yet stylish set of torture scenes. The stylised take on things, of course, is another aspect that makes many of Ishii’s ero guro works stand out from bog standard torture porn. While the 1960’s and 70’s were not short of films basing their whole premise on offering the audiences something truly shocking, the cinematic quality was often somewhat lacking. Filmed on cheap equipment, with bad lighting and equally awful set design, many otherwise great films suffered from the distinct lack of funding for this type of cinema. However, Ishii, working as a freelancer for Toei, had the luxury of using big studio equipment and more importantly, their purpose built sets. Filmed in Toei’s Kyoto set, Joy of Torture is rich with period detail and looks astonishingly good for something that is essentially an exploitation piece. The cinematography is well crafted, as are the costumes and lighting, giving an otherwise rather sleazy film an air of sophistication, that Western films of the same era certainly lack. That is not to say that Joy of Torture is necessarily any more sophisticated than any other films of the same ilk, but if nothing else, it does make for a very pleasurable watch.

As far as Ishii’s torture series goes, his work seems to truly shine in the anthology format. While his feature long stories have a habit of meandering and lacking focus, the short, sharp storytelling of an omnibus appears to bring the best out of him. Shogun’s Joy of Torture is a particularly successful one, as it does not really suffer from the uneven nature that sometimes plagues this type of storytelling. All the segments have their strong points, each telling an equally interesting story and each building up the suspense, leading to the grand finale of complete gorefest. It is well balanced, beautifully shot and perhaps most importantly, lives up to its infamous reputation. Absolute must watch for any fans of Japanese torture cinema.

Shogun’s Joy of Torture is out on Blu-ray from Arrow Video from 22 February 2021.

The release contains an interview with the author Patrick Macias, discussing Ishiis ero guro works and a video essay by author and critic Jasper Sharp, exploring the history of torture in Japanese cinema. Both make for an interesting watch and will certainly be of interest for any Ishii fans.

The release also has audio commentary by Japanese cinema expert Tom Mes and those lucky enough to get their mitts on the first pressing, will get to enjoy an illustrated collectors’ booklet featuring new writing on the film by Mark Schilling.