Suzuki bares his teeth in this dark and gritty tale of drugs, prostitution, and the journalists who uncover them…

Smashing the 0-Line (Mikkô zero rain) hits the ground running. By thirty seconds in, before the title card evens pops up, we’ve already met our two leads and have a sense of their personalities – one friendly, the other work-obsessed. These opening moments set the pace for Seijun Suzuki’s exploration of the network of drug and human trafficking that rots beneath Tokyo’s surface. From start to finish, Suzuki doesn’t pump the brakes in Smashing the 0-Line, and the result is one of the most fast-paced and thrilling action movies in his early line-up.

Essentially a hard-boiled detective flick under the guise of a journalism movie, Smashing the 0-Line blends Hollywood noir and Japanese yakuza in Suzuki’s signature blend of drama and crime. The film’s opening is not forgiving; it requires a few moments to parse the relationships between the characters that govern the story. Nishina (Yuji Kodaka) and Katori (Hiroyuki Nagato), close friends and journalists for competing newspapers, are both assigned to investigate the 0-Line, a drug-trafficking route between Hong Kong and Tokyo. As the latter’s single-minded dedication to his task threatens those around him, Nishina and Katori’s sister (played by Sanae Nakahara) are pulled into the crosshairs of a femme fatale yakuza boss.

While performances are solid all around, Nagato’s Katori steals the show. At once charming, cold, nihilistic, and deceptive, he is a Machiavellian journalist. In his pursuit of the elusive crime lord Somei Ryu, he sinks so low as to make his own sister vulnerable to rape at the hands of Ryu’s men. Katori is singularly unethical, unfeeling, and unwavering in pursuit of what should be a noble goal, but what is twisted into a matter of personal pride. The dark yin to Nishina’s heroic yang, he is the more interesting of the two by a long shot.

Kodaka’s rather vanilla Nishina at first appears to be the film’s moral centre, but even his mundane heroism is eventually tainted by the corruption of the crooks that he is attempting to unmask. By the tale’s end, he has begun to resort to the same deceptive and ingenious methods as Katori. It is this unconventional character arc that keeps him interesting; he is a good man forced to resort to shady methods.

In Smashing the 0-Line, Suzuki doesn’t shy away from tearing the covers off of Japan’s hidden societal corruption. Doped-up and drugged-out prostitutes get into bed with gun-dealing Americans, money launderers bite off their own tongues to escape the cops, and journalists are more than willing to get their hands dirty in the thick of it all. Like many of Suzuki’s works, the film is a sign of a changing tide in Japanese cinema, a glimpse at a moment in which taboo was openly defied by filmmakers looking to make some noise. Whether he intended the grit of his story to be a wake-up call, or whether he just wanted it to be attention-grabbing, the director makes it difficult to look away from the dark underbelly he captures. 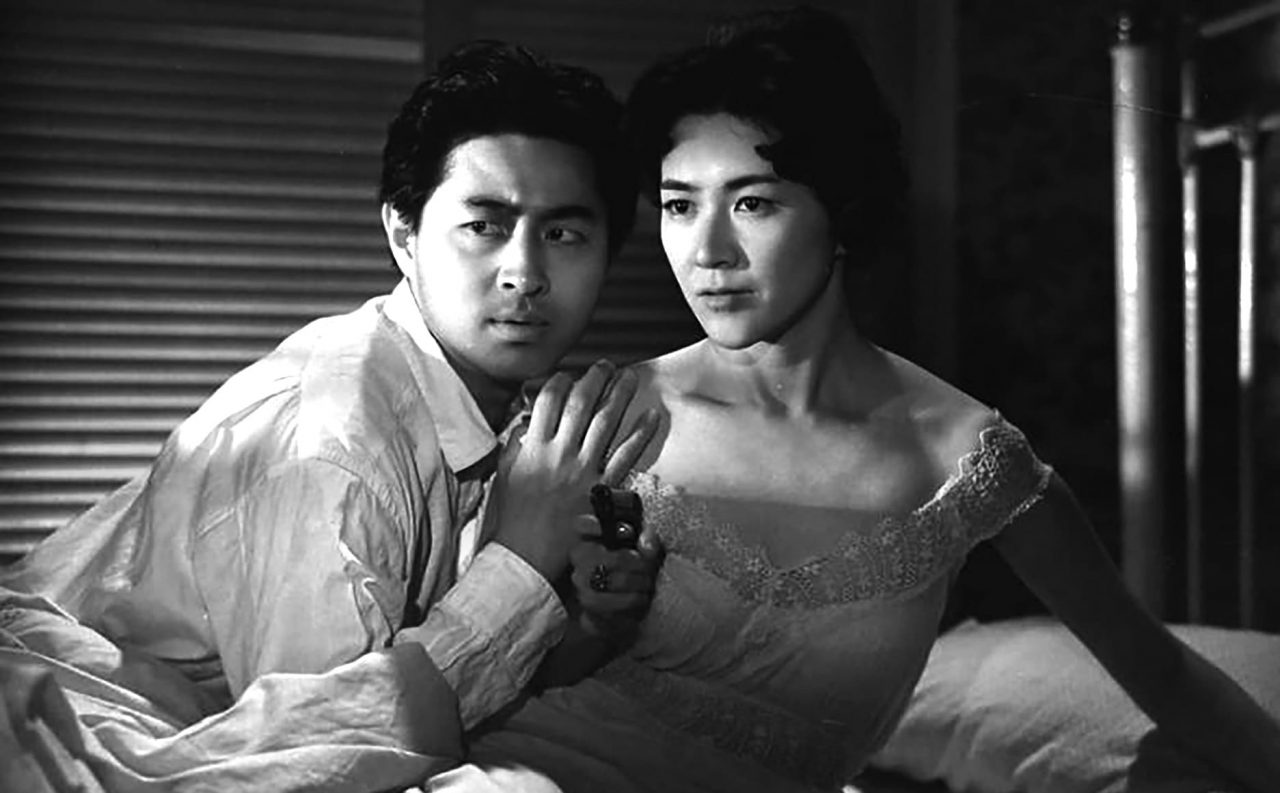 While Suzuki’s direction doesn’t take too many risks, Smashing the 0-Line is nevertheless an interesting look at a creator still in the process of forming his own style. Some elaborate tracking shots and point-of-view takes punctuate what is in many respects the next step in Suzuki’s evolution towards the epitome of cool cinema. Similarly, the story never quite hits the all-out bizarre heights of his later pieces like Branded to Kill. Nevertheless, the film is competent, well-made, and robust in composition. It may not be avant-garde, but it is definitely engaging and fast-paced.

Suzuki’s films lean on their soundtracks to round out their atmosphere, and, luckily, the music by Taiichirô Kosugi delivers here. Stampeding drums and crooning sax fill a playlist that is quintessentially early-60s Japanese jazz. Much like the directing, there aren’t too many surprises to be found here, but each piece perfectly accentuates the crisp suits and swirling cigarette smoke of Kodaka, Nishina, and their enemies.

Smashing the 0-Line plays out a bit like a proto-James Bond movie. As the web of drug dealers and pimps grows more and more convoluted, our protagonists don disguises, bed a handful of mysterious and dangerous women, and get into their fair share of scraps. Oh, and don’t forget a mysterious, nigh-unseen antagonist. At the same time, it is a sharply-made Japanese take on American journalism noir classics like The Sweet Smell of Success. The resulting mixture is a fun bit of action and smoke-laced intrigue.

Smashing the 0-Line is included as part of Seijun Suzuki: The Early Years – Vol. 2. Border Crossings: The Crime and Action Movies, available from Arrow Video from Monday 16th April 2018.