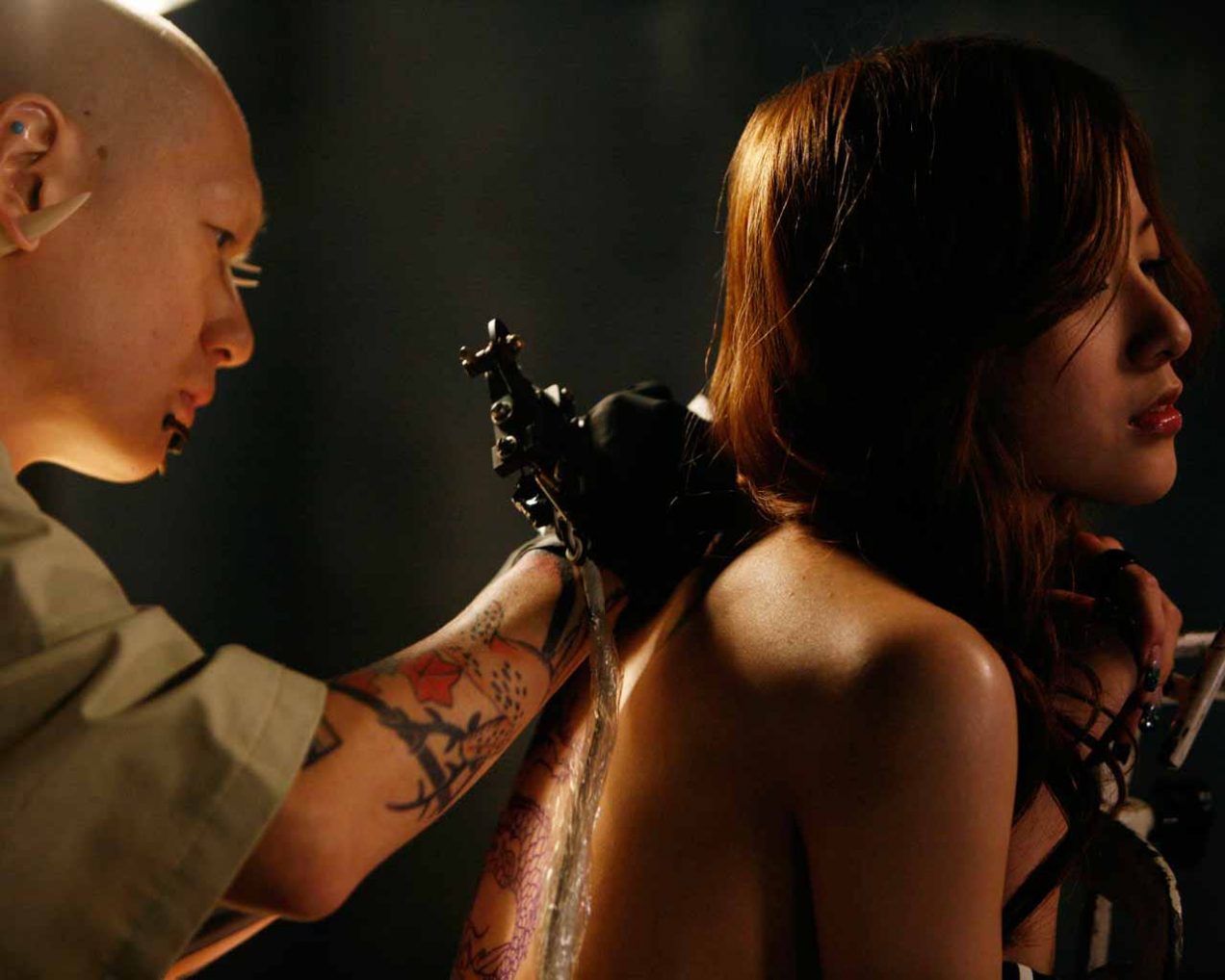 Originally released back in 2008, Snakes and Earrings is an adaptation of Kanehara Hitomi’s Akutagawa-winning and massively popular 2003 novel Hebi ni Piasu, marking the film debut of Ninagawa Yukio, an acclaimed theatre director known chiefly for his Shakespeare productions. While Japanese counter-culture exposés and tales of wayward youth are common enough, the film goes a step further in its graphic depiction of piercings, tattooing and sex of various kinds, following a young girl who gradually slides into angst and malaise.

Young actress Yoshitaka Yuriko (Adrift in Tokyo) takes the lead as the 19-year-old Lui, who one day meets the tattooed and pierced Ama (Kora Kengo, The Woodsman and the Rain) in a nightclub. Entranced by his split tongue, she finds escape from her boring average life in their relationship, and through him meets Shiba (ARATA, Ping Pong), a body modification specialist with a penchant for sadism. Paying Shiba for piercings and tattoos with rough sex, Lui finds herself caught between the two men, and slowly but surely starts to wander down a dark path of self-destruction.

Extreme content aside, Snakes and Earrings was always going to be a difficult book to bring to the screen due to its short length and economic prose. Oddly, Ninagawa Yukio takes quite a different approach to the material, the film clocking in at over two hours, which unavoidably makes it come across as a bit of a stretch. With the characters by definition lacking motivation or drive, the narrative similarly at times seems to meander along, content to simply follow its central trio as they meet up, chat, get pierced or tattooed, and have sex. It’s this aspect which is likely to divide viewers, as some may well find its unfocused approach, coupled with a generally cold and distant atmosphere a bit off-putting, while others will appreciate its lack of melodrama or tawdry tears.

The film does work well as a chilly, nihilistic character study in this regard, and though Lui is hard to connect with on any kind of emotional level, her journey is bleakly engaging and rings depressingly true. The love triangle at the heart of the film is far from the usual romantic drama gimmick, and holds the interest in a grim manner, even if the downbeat ending is never really in much doubt – there are moments of tenderness scattered throughout to be fair, and they do surprise, even if none are ever really developed. Yoshitaka Yuriko impresses in the lead role, and the lack of emotional depth to Lui is no reflection on the quality of her strong performance, which purposefully depicts the protagonist as a lost soul, tormented by her own emptiness. Kora Kengo and ARATA are both fine, and together they do make for an intriguing gang – coincidentally, Yoshitaka and Kora went on to pair up again in A Story of Yonosuke.

The film is unsurprisingly a very adult affair, with a great deal of sex and nudity right from the start, including bondage and some fairly rough S&M scenes and a few flashes of bloody violence. Shot with a grey, grimy eye, the film has a suitably grounded look, and this helps to ensure that it never really feels like cheap exploitation, partly due to Ninagawa’s background in theatre, which does give it the air of a three character play. The source material by Kanehara Hitomi, who was only 21 when she wrote the original novel, also shines through in this respect, and the sex is genuinely traumatic and psychologically disturbing, rather than giving the impression it was shot for the titillation of an older male audience.

Though not for everyone, Snakes and Earrings is a very creditable adaptation, and a challenging film in its own right. Deliberately distant and obtuse, it nevertheless offers a frank and searching exploration of the hollowness and isolation at the heart of Japanese youth delinquency, boosted by brave work from Yoshitaka Yuriko.

Snakes and Earrings is available via YesAsia.