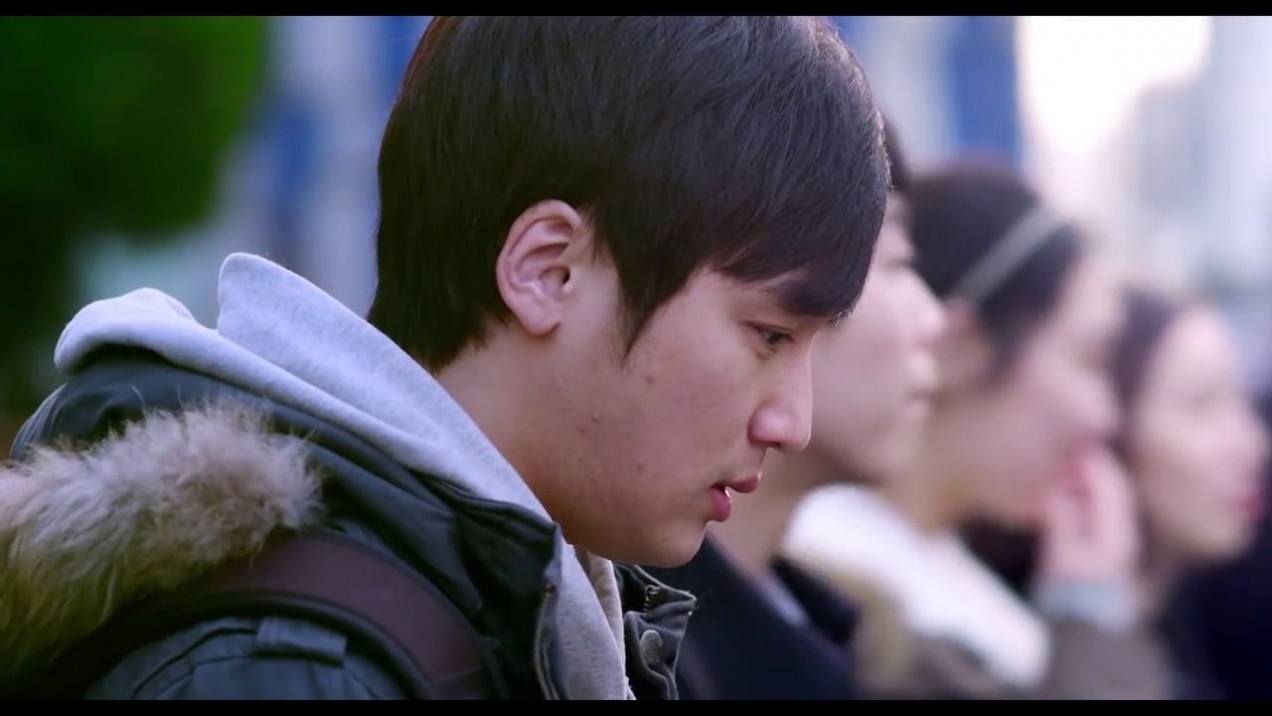 One of the worst results to come out of the age of social media is that we now have a fast and easy way to group-attack complete strangers if we don’t like something they say or we don’t like their face or even if we just don’t like who they are. It’s such a prevalent phenomenon that there’s even been a book about it, Jon Ronson’s ‘So You’ve Been Publicly Shamed’.

And now we have Socialphobia aiming to be the film commentary on the subject. This debut feature from Hong Seok-Jae opens with an on-screen deluge of tweets reacting to the big news story of the day that a deserting soldier has taken their own life. In amongst the ‘aww that’s sad’ comments is a tweet from Min (Ha Yoon-kyeong), who goes by the online name of Rena, saying that the soldier will burn in hell. She receives instant backlash from others on line, but refuses to retract her statement and then just goes in harder.

Ji-woong (Byun Yo-han) and Yong-min (Lee Ju-seung), two school friends studying to be police officers, are angered by her words. They send her a few threatening tweets, but when that doesn’t get the desired response they join up with internet live show host Mr Babble, and a few other recruits, to meet out vigilante justice by hunting her down and shaming her into apologising.

Now in the firm grip on mob-mentality, the group heads towards Min’s flat thinking it’s a great idea to live-stream the whole event. But when they get to Min’s flat it all goes wrong as they find her hanging from her balcony, dead. The boys attempts to clean up their social media and delete all their antagonistic interactions with her, but as they put they put their little trip out on the web for everyone to see it’s only a quick hop before the police get involved.

Even though Min’s death is ruled a suicide, the boys get their turn in being jeered at by the online masses for their involvement and we get a metaphorical Ouroboros where internet trolls troll the trolls who trolled the troll. Driven by that, and let’s also say a little guilt to give them the benefit of the doubt, the plot veers into murder-mystery territory when speculation arises that in actuality Min was murdered. As aspiring officers, Ji-woong and Yong-min jump on the chance to clear their reputation and play amateur detectives. And because they haven’t learnt their lesson, they use the internet to look for clues and discuss theories.

There are some clever aspects to this film, not least the way in which it plays with the traditional concept of the unreliable narrator. Here we learn very little first-hand about those involved, instead characters are developed through hearsay and gossip, a kaleidoscope glimpse of the protagonists which characters and the audience stitch together to form opinions much like real online life. The adequate, but not stand out performances, by the actors coincidentally work to support this by never drawing the audience in enough to feel like they know a character.

The movie also makes good use of incorporating on screen texts and tweets both as part of the narrative and as a way to bury the audience under a deluge of fast changing information to mirror that feeling of really having to work to sift out what’s important and relevant from a deluge of noise. There’s a lot of it on screen, so it’s a good thing that the film makers manage to pull it off. In fact, the visual element is a really strong part of the whole experience. The obvious low-budget gives the film a gritty look that actually suits the tone, visually matching being in the underbelly of the legal parts of the net (this isn’t hidden dark-net stuff). You’d think with a film all about modern technology, shiny digital film stock would be preferred but here it’s possible that it would work against the mood the story is conveying.

The director also does a pretty good job in showing how easily situations can spiral when group-thinking happens, for example there’s a genuine atmosphere of disquiet created when the group of boys hack Min’s address and form a mob to head to her home, not for a minute stopping to think of the appropriateness of ten or so men against one woman. It’s a shame that the gender-based aspects of online harassment isn’t what’s being explored here as it potentially more interesting than the mystery that is shoehorned into the film instead.

And here’s where we hit the films weak spots as it struggles to balance between the two forms of films it wants to be – social-commentary drama and murder-mystery – with neither fully holding up. As a drama, the underlying message that technology is bad in the hands of people who don’t use it well, feels banal and adds nothing to the conversations actually happening in the real world about online life. And whilst the opening and closing of the film manage to hold attention with what’s happening, the middle lags and you find yourself not really that bothered about whodunit, which is not good in a whodunit film. There’s also too many plot holes and some ridiculousness to the idea that a group of teenage boys are undiscovered master detectives.

If only the film had really committed to being one or the other, it might have achieved a lot more.