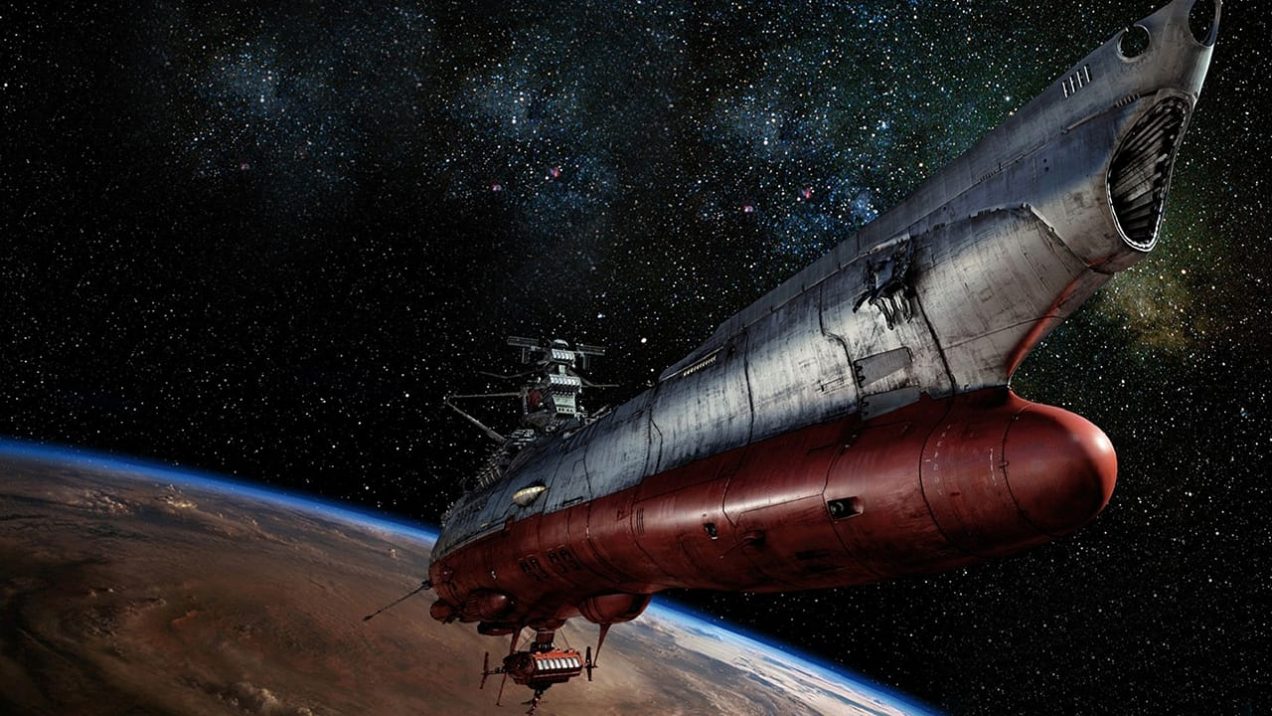 It’s the year 2199. Orbital kinetic strikes with radioactive meteors have rendered the surface of Earth uninhabitable; humanity has retreated underground, but they only have one year left to live. A message capsule from a distant planet promises a way to remove the radioactivity and allow people to walk again on the surface. Using the designs contained in the capsule, a faster-than-light starship is built, using the WWII battleship Yamato as the basis. The ship and its crew departs for a long voyage, to the planet Iscandar and back, battling against the Gamilas empire and its ruler, Desslar.

It’s also the year 1974, and MATSUMOTO Reiji (松本 零士) has just taken the reins of the project that will become Uchū Senkan Yamato (宇戦艦ヤマト), initially devised by NISHIZAKI Yoshinobu (西﨑 義展). Matsumoto brought a very characteristic style, both to the art and to the story, and it’s quite probably that without him, Nishizaki’s project would not have had the impact that Yamato had. Using a centuries-old sea battleship to house a starship seems a very far-fetched idea, but you have to remember what the historical Yamato was: the biggest, most powerful battleship built during WWII, that should have given the Japanese navy a decisive edge in the Pacific against the USA. Although it essentially failed to deliver on its promises, and was sunk on April 7th, 1945, the ship still symbolises Japan’s heroism and fighting spirit.

The story of the crew under Captain Okita, with fighter pilots Kodai, Shima, Sanada, marine Saito, nurse Mori, doctor Sado, engineer Tokugawa; of Desler and Starsha; their adventures and personalities, have left a deep impression on Japan’s culture, even outside the ranks of anime enthusiasts: it’s not everyday that bronze statues of animated characters get erected, but in the town of Tsuruga there are almost 30 such statues, representing not only characters and scenes from Yamato, but also Galaxy Express 999 and Captain Harlock. Yes, because after fusing the hero’s journey with space opera and military ambitions, Matsumoto kept producing influential works featuring strong, courageous characters saving the world against insurmountable odds. Practically everybody in Japan knows Matsumoto and his stories: there have been sequels and retellings for the past forty years, and even if not all of them have been equally successful, the popularity of Matsumoto’s works never waned.

Yamato, in particular, has seen many adventures in films and series: after the first 26 episodes in 1974-75, the crew embarked in a suicide mission against the Comet Empire in Farewell to Space Battleship Yamato (1978). That story was ‘ret-conned’ as an alternative timeline after fans expressed outrage at the death of the crew, so the story was reworked in a second TV season. It was followed by two more movies, Yamato: The New Voyage (1979) and Be Forever Yamato (1980), a third series, and the Final Yamato movie (1983).

The live-action movie was released in 2010, written by Nishizaki and directed by YAMAZAKI Takashi (山崎 貴), it reworks the basic story of the ’74 series, mixing in some ideas from the first movie and the second series, with significant changes to the nature of the Gamilas people and to the device used to cleanse the Earth. The acting is very Japanese, with displays of emotion that look over-the-top compared to Hollywood’s standard fare, but then, the entire story is over-the-top, a single ship outgunned and outnumbered, on a voyage with no certainties, to save the entire planet: we can appreciate that subtlety is really not called for, here. YAMAZAKI Tsutomu (山崎 努, Departures, Kagemusha, Tampopo, Shield of Straw) delivers a somber and wise Okita, and KIMURA Takuya (木村 拓哉, member of the pop group SMAP, also voice of Howl in Ghibli’s Howl’s Moving Castle, 2046, Love And Honour) is appropriately cocky and conflicted as Kodai. I was a bit disappointed in the music: the classic Yamato score is never heard in its entirety, only in fragments, and the ending theme (Love Lives written by Aerosmiths’ Stephen Tyler) feels incongruous.

Women have always been under-represented in Matsumoto’s creations, each story has essentially just one or two women: Yamato had Mori and Starsha, Galaxy Express had Maetel and Prometheum, Harlock had Emeraldas. Furthermore, they tend to be willowy and ethereal, with extremely slim bodies and very un-Japanese long blond hair. This film adds a few more women to the cast (Mori Yuki was the only visible woman on the original Yamato), and makes them more important to the story: Mori is now a fighter pilot, Doctor Sado is a woman, and there are a few women on the bridge and throughout the ship. They’re still not as important as the men, and even Mori ends up molded to the lover/mother stereotype, but at least they feel a bit less “token” than in the original work.

At this point, someone might ask why I have not mentioned Star Blazers, which is the title under which many outside Japan know the adventures of the Yamato. The reason is that Star Blazers is a rather different story, which just happens to use most of the visuals from Yamato. Like Robotech (which re-uses pieces of Macross, Southern Cross and Mospeada), it’s not a translation but a mostly separate product. If your only exposure to the Yamato and its crew is via the Argo, you owe it to yourself to watch at least some of the originals: they may not have aged very well, but they’re still much better than the botched US rewrite.

While the canonical Yamato remains foremost of Matsumoto’s animated works, this film provides a good alternative take on its adventures, and can serve as an appetiser before (re)visiting those more extensive works.

Space Battleship Yamato is released on UK Blu-ray and DVD on Monday 19 August by Manga Entertainment.