Yes, I know what you’re thinking: It’s not often you see the words comedy and Johnnie To in the same sentence (even if his segment for Triangle did slip into farce somewhat). An oxymoron, surely?

And yet here we are with a film that ditches the directors more familiar darker themes to concentrate on something altogether slighter, though crime based, and still doesn’t miss a step.

Kei (Simon Yam, Election, Ip Man, S.P.L.: Kill Zone) leads a gang of pickpockets (known as ‘sparrow’ in Hong Kong slang. They may be slick in their skills but it’s hardly big money stuff. That’s until Chung Chun Lei (Kelly Lin, Reign of Assassins, Full Time Killer, Mad Detective) walks into each of their lives, besotting each member in a different way.

What they don’t realise is that Chung wants their help to free herself from betrothal to the leader of another gang, Fu Kim-Tong (played by veteran Hong Kong actor Lo Hoi-Pang, Dream Home, The Longest Nite, PTU). Though Kei is reluctant to follow his pick pocketing brothers into attempting a heist to help Chung, it soon becomes all about honour amongst literal thieves. (Well, I didn’t say Johnnie To left all his themes behind, did I?)

In stark contrast to much of To’s work, this really is slight stuff – and yet his deft touch and stylish direction lifts this far beyond your expectations. Brilliantly shot, he makes Hong Kong look amazing. Not sure how. There’s road works around and all sorts, and in locations that will be very familiar to HK film fans. Yet it all looks stunning!

There’s a particular stand out scene that sets a duel of pick pocketing talents against slow motion umbrellas and a rain shower, choreographing the action with a Gene Kelly like precision. It’s brought rather obvious comparisons to The Umbrellas Of Cherbourg, though wider comparisons to French New Wave are fairly placed. We’ve previously covered his love of French film, and here the influence is obvious. Even the soundtrack by Xavier Jamaux and Fred Avril has a jaunty, cool 60s Latin vibe.

As you’d expect from To, he fills the solid ensemble cast with familiar faces, but at least here they get to enjoy far lighter roles than they’re used to from him. Cast members like Simon Yam and Gordon Lam Ka-Tung (Vengeance, Election, Ip Man) enjoy themselves immensely – though Law Wing-Cheong, Running Out Of Time, The Mission, may have trouble living down his hilarious appearance in drag for a long time. Kelly Lin plays her role with aplomb, particularly when ‘seducing’ the gang members one by one, creating real comedy out of scenes that could so easily have been played broad. And, of course, this being a Johnnie To film Lam Suet appears in a minor role.

Sparrow is a tender, stylish film from Johnnie To a the top of his game, a rather sweet and uncomplicated vision of Hong Kong given a 60s Parisian sheen. Yep, I know, that still sounds wrong…

Sparrow is released today at the ICA London, and at selected cinemas around the UK by Terracotta Distribution. A special edition 3-disc packed with extras is released on 9 May.

Terracotta have really put together something special for their release of Sparrow: a great presentation of the film; a second disc packed with extras, including Interviews with the cast, composer and filmmakers and the world DVD premiere of Yves Montmayeur's hour-long documentary on director Johnnie To; and there's the fab, chic soundtrack on the third disc.

A masterclass in how to release an Asian film in the UK (and west) - if only they all were like this... Cine-Asia watch out! 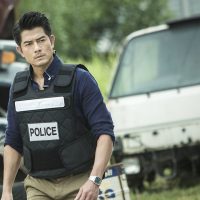