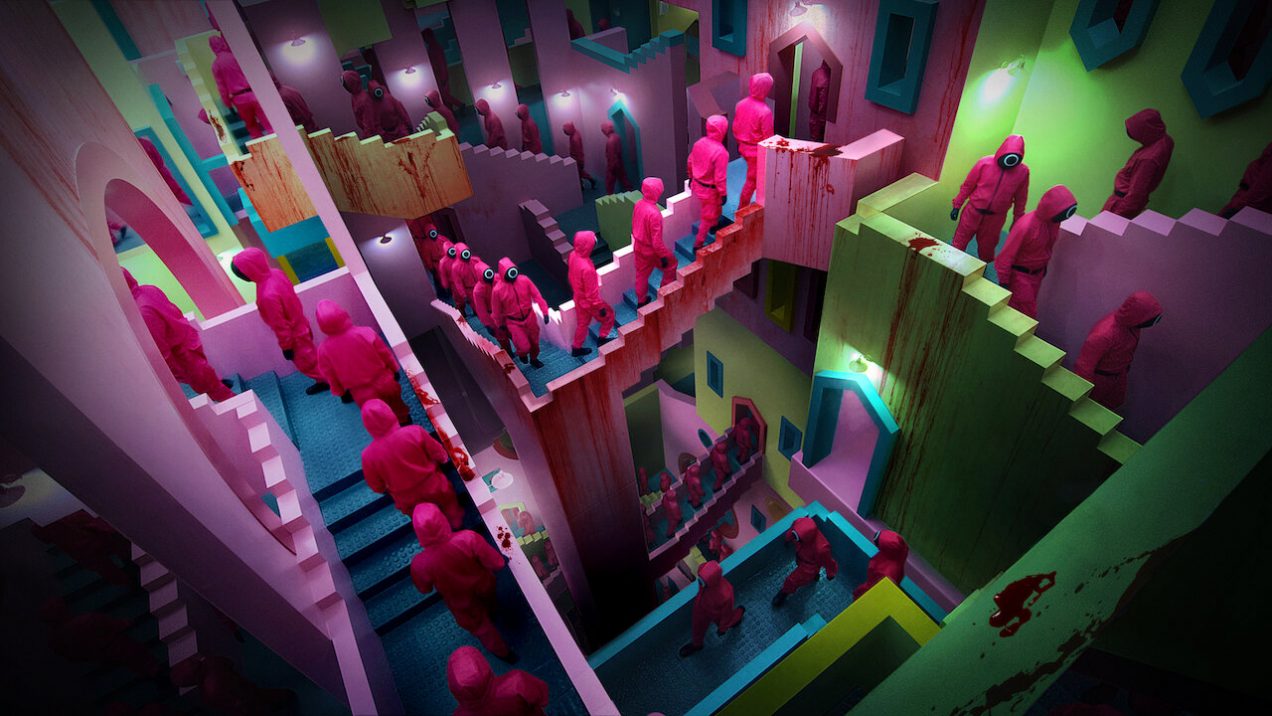 The macabre drama taking the world by storm…

Let’s face it. As you read this, there’s little doubt you won’t have heard of Squid Game, if you’re not already actually watching it. This nine-episode Korean TV series has taken the world by storm since all episodes were released globally via Netflix on 17 September, rising to the overall number one spot in the US and UK, and charting at the top TV series in most territories. Whether or not this would have happened pre-Parasite and a content-depriving global pandemic it’s hard to know, but it’s still impressive for a Korean-language drama. (Though an English-language dub is included for those who can’t be bothered with that one-inch barrier.)

Here we find a rapidly diminishing 456 contestants in a deadly contest for survival where the winner could walk away with 45.6 bn won, led by down at heel Seong Gi-hun (Lee Jung-jae, An Affair, Il Mare) and old friend Cho Sang-woo (Park Hae-soo, The Pirates, Master). Forced by masked armed captors directed by the mysterious Front Man to play children’s games with a macabre twist. We’re soon introduced to other contenders, from the tattooed gang member Jang Deok-su (Heo Sung-tae, Rampant, The Outlaws) to immigrant Abdul Ali (Anupam Tripathi, The 8th Night, Space Sweepers), through North Korean defector Kang Sae-byeok (Jung Ho-yeon) to Oh Il-nam (Oh Yeong-su, Spring, Summer, Fall, Winter… And Spring, God of War), an elderly man suffering from an inoperable brain tumour. All share dire financial needs that the promise of riches will pull them and their loved ones out of. Infiltrating the hosts is police officer Hwang Jun-ho (Wi Ha-joon, Midnight, Coin Locker Girl), desperate to find his missing brother but finding them as secretive amongst themselves as they are with the players.

Writer director Hwang Dong-hyuk previous track record in film with both critics and audiences is just as impressive, even if his subject matter remains difficult to pin down. 2011’s Silenced (aka The Crucible) was based on real-life horrific events at a school for the deaf that brought them to the attention of the public, not only creating a box office hit but generating widespread conversation and anger at them. His rather incongruous choice of next film, the 2014 comedy Miss Granny, became another huge hit with various remakes across Asia (as well as a mooted Hollywood version still to come). 2017’s The Fortress took another sidestep, this time into period drama. Well-constructed and ambitious, it may have benefited from being extended into a television series.

Squid Game is no less ambitious in its production design. From the giant girl doll that plays the ‘Red light, green light’ game (aka Statues) to the blank masks marked with squares, circles or triangles according to rank, to the staircase room between rooms – an Escher-styled maze in playroom colours. It’s a fully formed world that effectively has created its own iconography.

Within it Hwang plays out these grisly games with a real eye for the Grand Guignol tradition. Little is left to the imagination as all sorts of horrors befall our protagonists, impressively dragging out the tension of those situations to a nearly unbearable extent. What Hwang does even more effectively is build sympathetic characters, even with their flaws. We learn much of their immediate situation, but only allusions to their history (sometimes deliberately). For instance, it’s hinted that Seong was deeply affected by police violence during the turbulent strikes of 1996/1997. Only Ali’s character feels a little one-dimensional, being a relatively positive depiction of an immigrant, but still crossing that line between being trusting in human nature and just too naïve.

Hwang is greatly helped by a great cast on top form. Lee Jung-jae cuts a perfect line as Seong, kind-hearted but liable to make infuriatingly dumb decisions. Wi Ha-joon recently proved how willing he is to throw himself into any role as the serial killer at the heart of Midnight. Fans of Korean cinema may well be distracted by the big-name cameos, like Gong Yoo’s appearance as a salesman who recruits some of the contestants, but the standout may well be model Jung Ho-yeon making her acting debut. In return, the cast gets a sharp script with humour amid the chaos and dark situations.

The elephant in the room is the film’s similarity with Takashi Miike’s manga adaption As The Gods Will, where students face increasingly bizarre takes on children’s games with a deadly outcome. According to Hwang he only became aware of this during filming, though admitted being inspired by other Japanese manga and animation, including the adaption of Battle Royale. The 2009 live-action adaption of Kaiji: The Ultimate Gambler springs readily to mind, starring Battle Royale’s own Tatsuya Fujiwara, who also appears in another riff on the theme, Hideo Nakata’s The Incite Mill (aka Death Game). Even Netflix themselves recently got in on it with manga-based series Alice in Borderland. It’s hardly as if it’s without comparison with Western films like 1997’s Cube or even the recent Escape Room series, even sharing some salient plot points with the latter. Stylistically, the masks of the captor’s recall the live-action adaptions of Naoki Urasawa’s 20th Century Boys.

That aside, Hwang Dong-hyuk has done a great job of bringing this ghoulishly entertaining series to life. Building on the genre successes of the zombie-fuelled Kingdom, but sidestepping the pitfalls of a Joseon period drama – which is never going to translate to Western audiences well – for a very modern look at working-class trials in Korea. Here a similarity with the down-at-heel protagonists of Parasite can hardly hurt (and the score by the film’s composer Jung Jae-il definitely doesn’t, adding much-needed quirkiness to match the look of the production). It’s only the necessities of a TV series that can hold back the series. The narrative can be a bit stop-start in terms of pacing, and sometimes seems more angled in terms of revelations – the big shock coming from casting more than it does plot (again we come to those cameos). Like many a TV series, the last episode might feel a bit of an anti-climax. And despite the director’s claims not to be interested in a sequel, it really does seem to be lining things up for one. (And after it’s been this successful, it’s hard to think that won’t happen.)

At its core Squid Game wrestles with the moral question of human kindness in a consumer world, and just how far would you go to not only protect your own life but create a new one for those you love. Unsurprisingly, the one reality we walk away with is that though money can change things, it really doesn’t make you happy. However, this series might.

Squid Game is available to stream now on Netflix.