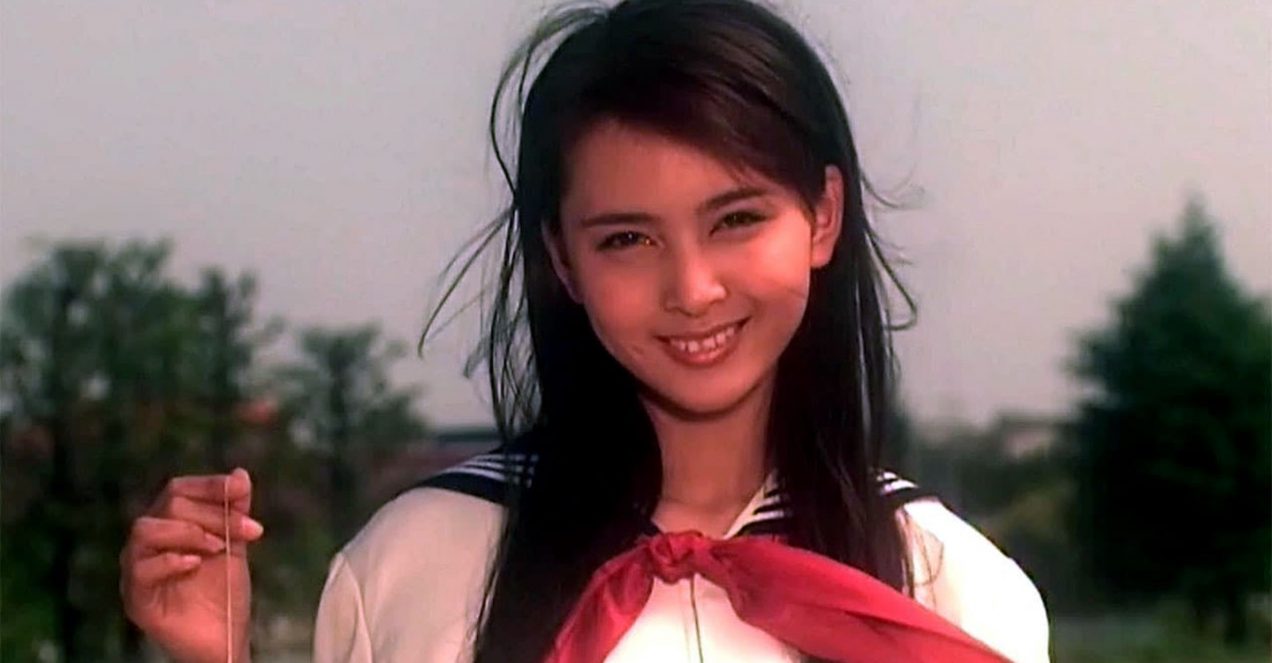 In the late 1990s and early 2000s, before the likes of Meatball Machine, Tokyo Gore Police and other deliriously over the top gorefests took Japanese splatter to new and surreal heights, the genre was mainly focused on zombie films, with Atsushi Muroga’s Junk in 1999, Ryuhei Kitamura’s Versus in 2000 being prime examples. Such films often paid tribute to western classics like George A. Romero’s Dead series and Sam Raimi’s Evil Dead, though often working in the kind of whacky comedy alongside the buckets of blood and flying viscera.

This was very much the case with Stacy, or to give the film its full title, Stacy: Attack of the Schoolgirl Zombies, a decidedly low-budget entry from 2001, set in Japan in the early 21st century, when girls aged around 14-17 start experiencing a phenomenon known as Near Death Happiness (NDT) before dying a week later and resurrecting as flesh-eating ghouls referred to as Stacies. To keep the populace safe, the Romero Repeat Kill Troops are deployed to dismember and terminate the Stacies, while a rogue gang of operators who model themselves on Drew Barrymore offer a more humane method for the disposal of loved ones. Against this background, a puppeteer Shibukawa (Toshinori Omi, 37 Seconds) falls in with a schoolgirl called Eiko (Natsuki Kato, Battle Royale 2), who is already experiencing NDT and who decides that she wants him to be the one to kill her for the second time when she becomes a Stacy.

Based on a novel by Kenji Ohtsuki, Stacy was directed by Naoyuki Tomomatsu, mainly known for his AV and Pinku work, and for the rather dubious Rape Zombie series. His approach here could charitably called scattershot, though the film certainly wears its influences on its sleeve, from the Romero Repeat Kill Troops and the many, many other Dead references, through to the featuring of ‘Bruce Campbell’s Right Hand’ chainsaws, and with the plot partly focusing on a mad scientist with an underground Stacy lab. Some truly bizarre comedy is very much the order of the day, as much so as any kind of horror, the film seeming to be pitched as a kind of oddball satire, and while it’s not exactly clear what its targets might be, it moves at a dizzying speed and progresses in a breezy, pinball-style random manner. Added to this is the sheer weirdness of the NDT phenomenon, which generally results in a huge amount of high-pitched giggling, meaning that Stacy probably isn’t a film for all genre fans, or even for all Japanese splatter aficionados.

For viewers with a (very) high tolerance for the surreal and senseless though, Stacy is a great deal of fun, and one of the more inventive films of its type, with its strangeness being cheerful and energetic to a fault. The left-field humour aside, while the extremely low budget and shot on video production values do limit the effectiveness of the gore, there’s at least plenty of it, and Naoyuki Tomomatsu does manage some enjoyably gruesome, if familiar-looking set pieces. Where the film surprises, and what makes it stand out from the shambling crowd, is the fact that it’s really quite sweet, with the unlikely relationship between Shibukawa and Eiko and the unexpected way that it develops being genuinely affecting. Though this might not sound like high praise for a zombie exploitationer, this aspect of the film is arguably its strongest, and it helps keep the viewer engaged and gives the film a core for its senseless carnage and comedy to revolve around. Tomomatsu also wins points for the way in which he moves the plot to exploring the reason behind the Stacy outbreak, and what it means for the future, something which also plays out in outlandish fashion, though which makes for a conclusion that’s refreshingly different to the usual blood-soaked nihilism seen in zombie films.

Stacy is very much a cult item, and a film which will be a real joy for some and will prove painfully grating for others. For all his nods to Romero and western horror, Naoyuki Tomomatsu has produced something truly creative and original, and for better or worse there really aren’t many other films like it.