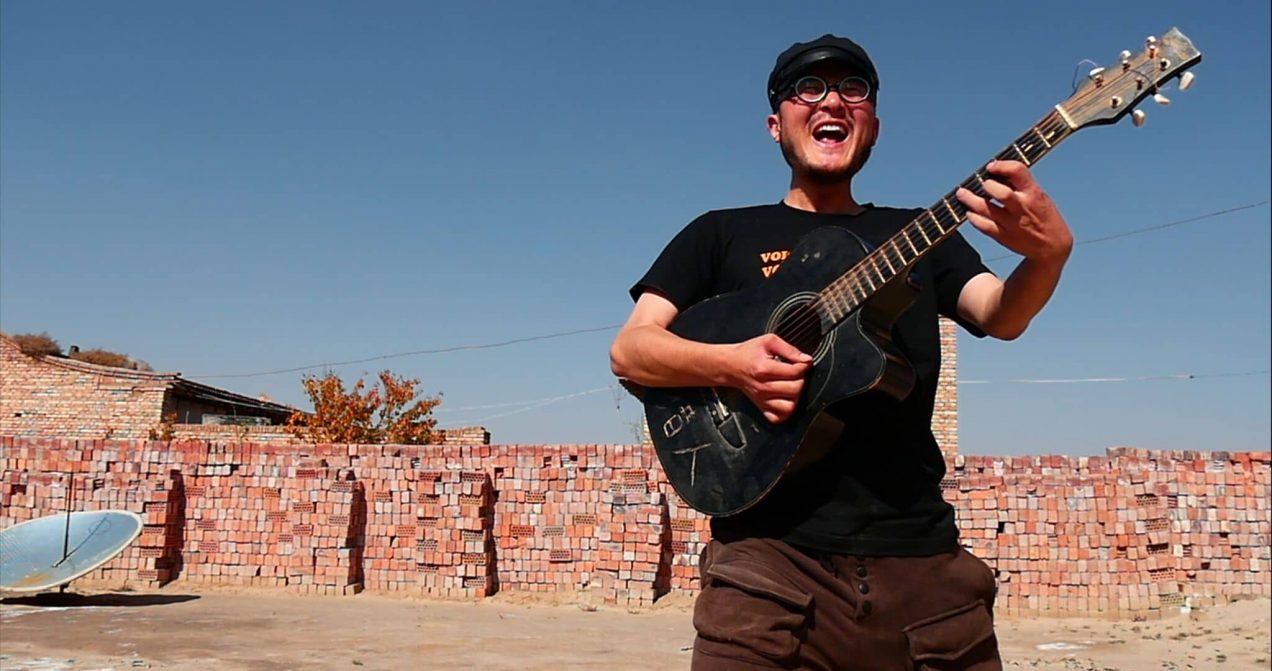 Nan Zhang’s energetic documentary follows a young musician as he travels China, chasing the dream of becoming a famous singer…

Early on in the documentary Stammering Ballad, the young musician Gasong makes a pilgrimage to visit a famous blind folk singer he admires. As the two of them smoke and talk about music, the old man asks Gasong what he does for a living.

“I sing. I perform, and I collect folk stuff,” Gasong answers after a pause. The old man seems puzzled by this. “So who do you work for?”

This nice sketch captures the way two different generations of musicians see folk music and gets at the struggles of being an independent artist in modern China. Engaging with these themes among others, Nan Zhang’s interesting and energetic documentary follows the young folk musician Gasong as he travels China, playing gigs in small bars, meeting peasant folk singers, and chasing the dream of becoming a famous folk musician.

Although at first seeming an odd choice of subject for a biopic, the struggling musician Gasong emerges as a fascinating character. With his round glasses and chubby face, he looks amiable and is clearly endearing to those around him. Yet he remains something of a loner. He has a bad stammer and is very sensitive to how people might make fun of him for this, something which may explain why he seems to see himself as an outsider and is unable to get close to people.

As soon as he starts singing, however, this stammer vanishes. It is like with the singing, which he started when he was six, he is able to express another more confident and more dramatic side of himself. He is clearly extremely passionate about Chinese folk music and Zhang uses this passion to present us with a thorough exploration of this unusual art form with its strange wailing singing and twanging instruments.

Zhang’s camera follows Gasong around closely, but largely unobtrusively, so that we feel like we are watching him live his real life. In this way, the documentary reminded me a little of Water Salles’ excellent portrait of the film director Jia Zhangke in Jia Zhangke: A Guy From Fengyang.

Zhang’s documentary also cleverly allows the complexities of Gasong’s character to slowly unfold, glimpsed as we see him in different scenes. In one such scene, which is quite heartbreaking to watch, we see Gasong performing in a bar where the customers almost totally ignore him, the loud chatter and rattling of dice competing with his singing. We expect Gasong to be upset by this rude reception, but after the gig he still has his same undiminished optimism.

Some of the details of his life are also deliberately withheld from us, making him seem like even more of an enigma. Towards the end of the film, hints are dropped about an episode in his youth that may account for how he is.

But Stammering Ballad is as much a portrait of out of the way parts of China as it is of Gasong himself. Gasong’s travels and the folk music are used as a vehicle for exploring wider aspects of this vast and varied country. Zhang provides some fantastic shots of the scenery – the spread of dry dusty mounds in the deserts of Gansu and the crowded skyscrapers of Shanghai.

In one great scene, Gasong goes out into the fields with a big group of tanned, wrinkled skinned peasants and listens to one of them as she sings a traditional folk song. Starting to speak to them, he sings his own song – a seductive, flirtatious song that he directs to the old lady. The crowd of farmers, many of them in Muslim skullcaps and shawls, watch him in bemusement. It is a great depiction of rural Chinese life.

These scenes from China’s countryside are all shot with camerawork which, while occasionally seeming a little like something from a promotional video, is always stunning and really evokes the rich cultural tapestry and spectacular landscapes. In one nice shot, for example, Gasong stands on a snow-dusted hillside, a small inky figure in a whitewashed landscape.

There is a lot of interest in Stammering Ballad. The portrait of Gasong himself, the exploration of the folk music he loves, and the portrayal of different parts of rural China are all full of nice touches. Whilst these elements are not really drawn together into a particularly powerful film, they work alongside each other to make this a distinctive and engaging documentary.

Stammering Ballad screened as part of the Chinese Visual Festival 2019, which ran from 2nd to 9th May.