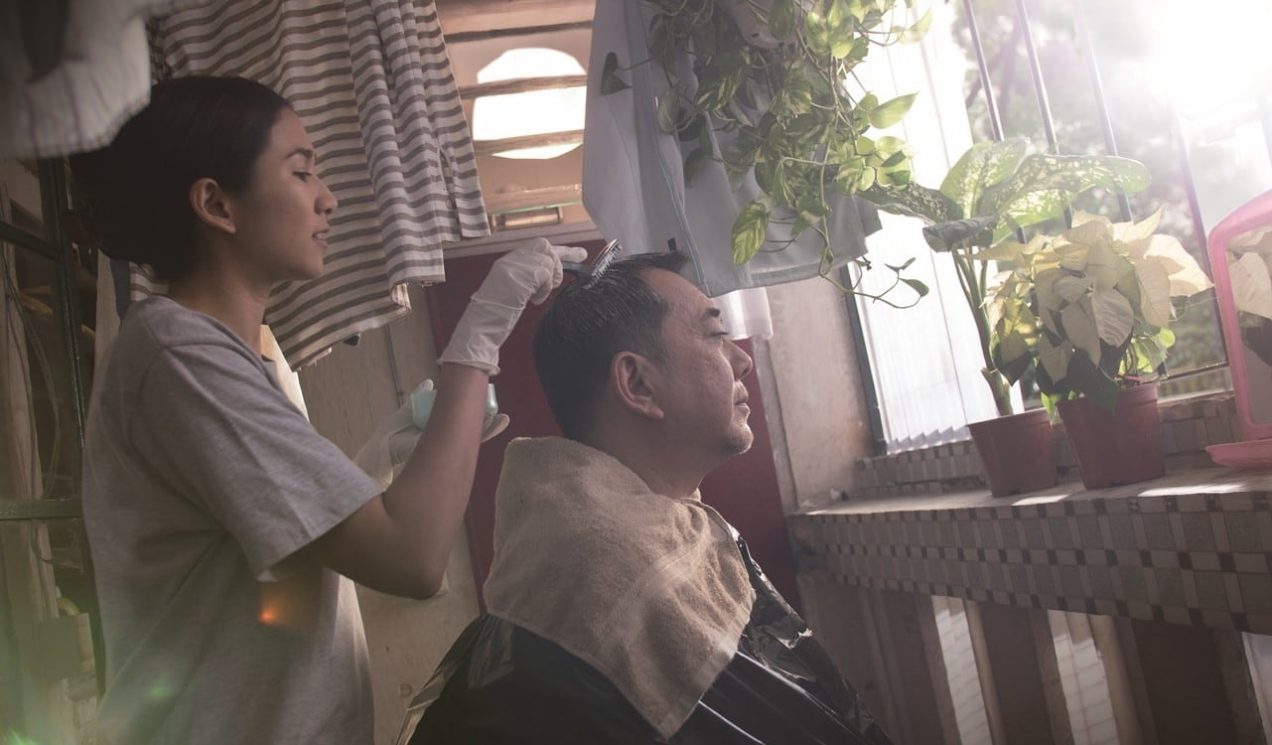 Cheong-wing played by Anthony Wong (Ip Man: The Final Fight, The Sleep Curse, Infernal Affairs) is a grouchy old man disabled from the chest down and in need of 24 hour care. He hires timid Filipino carer Evelyn played by Crisel Consunji who doesn’t speak a word of Cantonese and struggles with Cheong-wing’s temper and demands. The pair clash at first; Evelyn seeing her employer as a mean old man taking advantage of another domestic worker and Cheong-wing seeing his employee as an incompetent girl who he can barely communicate with. With time, however, they learn more about each other and see past the outer shell, discovering heart-breaking pasts, lost opportunities but most importantly, dreams for the future. Eventually, they discover themselves.

Still Human hits us with a plot we have seen before, the disadvantaged individual befriended by a free spirit who makes them see the beauty of life, think The Intouchables or Me Before You. Despite the clichés and predictability at times, the film succeeds by actually subverting the formula through endearing performances and effective character development.

The film opens with Cheong-Wing waking up in his dimly lit apartment and getting ready with a sullen attitude, he leaves in his electric wheelchair comically using a squeaky horn to alert passers-by to move. It’s this bleak and slightly eccentric opening that sets the tone for his character, until Evelyn stumbles into his life desperately trying to be a great carer despite her shyness. Our initial impression of them fades when we peek behind the scenes of their personalities. Cheong-wing is divorced and his ex-wife has remarried in America, he skypes his son who studies there and is disappointed at not being able to visit him, even worried about embarrassing him due to his condition. Evelyn meanwhile is escaping volatile family problems and actually has aspirations to be a photographer, which she abandoned for care work so she can pay the bills. Wong plays his character expertly as expected, he manages to provoke sympathy, annoyance and laughs throughout the film showing the many layers he can bring to the role. Consunji sadly falls short, she tries her best but the shy and clumsy act can be over the top at times and pretty amateur. It’s not awful to the point of bad acting but rather just a cry for more acting experience, this is her first film role so not too surprising.

The rest of the cast are just as impressive with Sam Lee as Cheong-wing’s best friend providing some light-heartedness through his affection for his friend, Cecilia Yip plays Cheong-wing’s sister with whom he has a strained relationship with, made even more difficult because of his condition. This provides some harsh emotional scenes.

In a world where we use our devices to help in everyday life, our protagonists do the same to overcome obstacles in the story. Cheong-Wing and Evelyn use smartphone translation features to communicate, Cheong-Wing skypes his son constantly, there is even a hilarious scene where Evelyn secretly films a supermarket assistant purposely mis-selling her vegetables whilst Cheong-Wing is watching live on the other end. He erupts at the assistant to sell her the right amount much to Evelyn’s triumph. These quirky moments bring great touches of realism.

Ultimately the interactions between Cheong-Wing and Evelyn is what really keeps the film going since its so damn entertaining. Despite the language barrier the two manage to communicate in various ways that elevates their bond from employer and employee to actual friends. They text each other, use broken English/Cantonese or just change their facial expression to indicate how they feel and what they want. Cheong-wing even hilariously teaches Evelyn Cantonese swear words without her knowing it, much to his friend’s alarm. It’s hilarious and moving to watch these two outsiders lower their guards to reveal their hidden pain and help each other overcome it. That’s the extraordinary thing about this film, rather than follow the aforementioned formula of one character changing the other, in this case both characters are disadvantaged because they believe their circumstances prevent them from truly living. Evelyn is a struggling Filipino domestic worker and Cheong-wing disabled and lonely.

Evelyn is ridiculed by the locals and looked down upon as a domestic worker and a Filipino, the film touches on the discrimination this group endures when working in foreign countries, something Evelyn experiences constantly. In reality, Filipino domestic workers regularly experience exploitation, abuse and even the confiscation of their passports in reported cases around the world, we see an example of this in the film. She also befriends a group of Filipino workers who provide exposition of this reality through their conversations. This brings a humanity to their experience which you wouldn’t get if statistics were just thrown at you. Cheong-Wing meanwhile questions his mindset of letting his condition stand in the way of his dreams and family. So the roles are ingeniously reversed where although both undergo a journey of re-discovery, Cheong-Wing changes Evelyn’s life far more than she does his.

Still Human uses a formula that warrants a genre in itself but still manages to grab your heart and not let go, it’s just such a moving film. It’s not simply about their relationship but really about two outcasts discovering their self-worth, and showing that sometimes the most helpless one isn’t who we expect. Their developing relationship is adorable, the politics are relevant and Wong’s acting is outstanding. It’s a tear-jerking watch that will warm your heart and an incredibly promising start to Oliver Chan Siu Kuen’s directorial work.