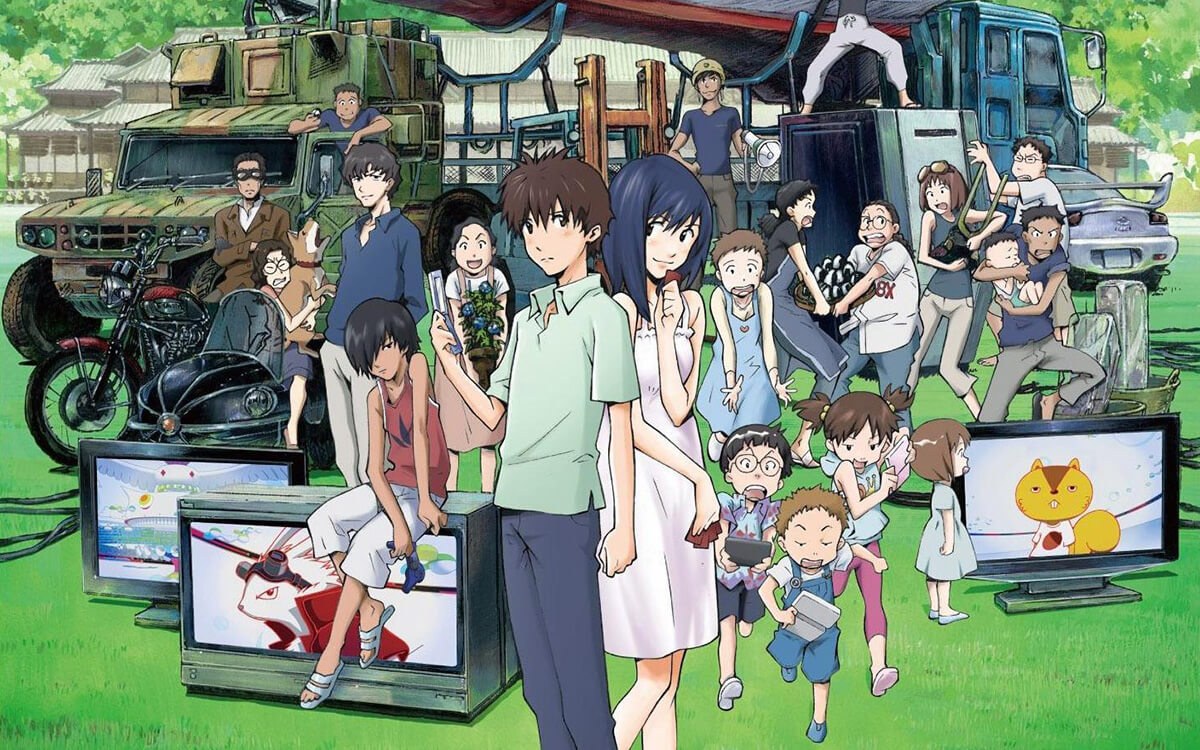 Trouble is brewing deep in OZ – a Second Life style virtual world where people can interact, shop, fight in tournaments, anything – a rogue Artificial Intelligence is taking over OZ and using it to threaten the real world.

For Kenji Koiso this turns out to be unfortunate as the AI has stolen his identity, framing him as the perpetrator. A mathematical whiz and computer nerd of the geekiest order, he’s accompanied school friend (and massive crush) Natsuki Shinhara to her family home to celebrate the birthday of her grandmother, only to find out that the summer job she promised him is pretending to be her fiancé.

With chaos ruling the outside world, Kenji soon finds out this is no ordinary family. With generations leading back to shoguns who once ruled the area, her grandmother still has an immense respect in the community, and the family a pride far beyond their current standing. Determined to not only clear his name but stop the AI, Kenji discovers he has some surprising allies…

Director Mamoru Hosoda’s first film since the massively popular The Girl Who Leapt Through Time is an equally sumptuous, considered and beautifully rendered animation. The real treat comes in how Mamoru translates the virtual world of OZ, ignoring any temptation to succumb to data filled screens (which was pretty much done to death after the original Ghost In The Shell and The Matrix anyway) for a far more creative, surreal vision, full of intricate detail. (The guardian angel whales John and Yoko are particularly cute!)

Here the themes aren’t unfamiliar to anime and Japanese sci fi: the dependence and often ambivalent feelings towards technology; the artificial intelligence gone wrong; even the David and Goliath proportions of the final battle. (Okay, admittedly there are no mega robots – strictly speaking, AI or not – or gigantic dinosaurs.) There’s more than a hint of the original Tron and even War Games, but it’s how Mamoru interprets these ideas that avoids comparison.

This is not set in a futuristic world, but a within the confines of a (reasonably) ordinary family setting; beautifully brought to life, with sibling rivalries and unforgotten disputes, the characters ring true even if events take quite a spectacular turn. It contrasts with his virtual world, which allows the director to create spectacular action sequences without detaching his audience from reality.

The central relationship between Kenji and Natsuki is more than a little reminiscent of familiar boy/girl archetypes in Japanese fiction, the most famous of which being the immensely popular Urusei Yatsura created by Rumiko Takahashi. Comparisons with Studio Ghibli are inevitable, and this is aimed a similar family audience (though undoubtedly older than Hayao Miyazaki has been aiming for lately). This has much more intelligence than you’d expect from animations aimed at moviegoers in the West.

Ultimately Mamoru seems to be implying that however great our virtual lives may be, it doesn’t take the place of face-to-face communication – and you can’t argue with that. Superb!

Summer Wars is released on UK DVD and Blu-ray today by Manga Entertainment, and is also available in both formats as a double-pack with The Girl Who Leapt Through Time.