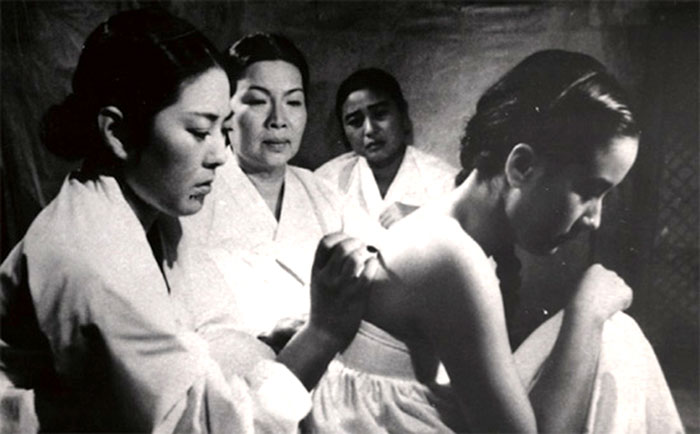 Set during the Joseon Dynasty, a highborn couple are happy but lack that all-important male heir to carry on the linage. Behind the back of the master of the family, Shin Gang-gyu (Lee Ku-sun), the family conspire to find him a surrogate to covertly bear him a son.

Rather than choose an experienced surrogate from a village well known for them, advisers choose the attractive but feisty young Ok-nyo (Kang Soo-yeon, Come, Come, Come Upward, Road to the Racetrack, Girls Night Out). Never having experienced sex before, her awkward encounters with the man of the house (who’s as reluctant as she is), soon turn to passionate embraces. But she begins to enjoy her position in the house and believe she has a future with Shin…

Picked for her attractiveness against more homely peers, we immediately sense as she agrees to become a surrogate mother, she has trapped herself into an inevitably heartrending finale. In this sense Surrogate is very much a melodrama, but Im has little time for mawkishness in how he plays it. And the ending scene is perhaps a little too detached from story.

The suffering Kang goes through in the name of ceremonies that supposedly will guarantee a son will be born. Her emotional attachment to both the father of her child and the excruciating childbirth sequence only add to the tragedy to come when she is (spoiler alert?) torn away from them. One of the most raw and unpleasant birthing sequences I’ve seen committed to screen, there’s an honesty here you won’t find in many films (indeed, childbirth is possibly one of the biggest lies celluloid ever sold).

With Surrogate Woman, Im Kwon-taek sought to defy the preference for sons and patriarchal order in Korean Society. echoing contemporary themes in period setting. The ridiculous fervour with which the entire family, including mother and wife, throw themselves into the plan only highlights it in contemporary life, in the mid 80s when surrogacy was hitting the headlines around the world. As with most of Im’s work, there’s a keen interest in ritual throughout, one scene that particularly caught my eye was the tattooing of Ok-nyo, where she is marked as Surrogate.

In this context Im’s depiction of women – admittedly very much of its time – slightly misses the mark. In retrospect, though the suffering of Ok-nyo and her mother is vital to the story, you wonder just how necessary it is that beatings involve modest (at best) clothing and being drenched in water? It’s true that sex was very much a part of Korean (and international) cinema in the 80s, but the explicitness often distracts from the story. In many ways, it seems almost like a precursor for E J-young’s take on Dangerous Liaisons, Untold Scandal. More interesting comes the recurring motif of conversations about ancestors and ghosts, often during these acts that underline the traditions at play.

At the recent panel interview, I wondered if Im Kwon-taek had been reappraising his films in a similar way. Seemingly rather open to criticising his own work – he told us he’d be happy if his first 50 exploitation films shot as part of his time within the studio system were burned so no one could ever see them – he admitted he had never truly made a film from a woman’s point of view, even those that had women as the main protagonist.

Though he was happy things had changed, he doubted the part his films had played in changing minds about women’s rights. Indeed, he mentioned Surrogate Woman specifically, saying he actually regretted making it. He’d hoped exploring the subject might persuade the population against patriarchy, but his film had not changed it.

Yet despite some of these limitations, Surrogate Woman still stands as another impressive work in Im’s catalogue. The performances are great; particularly Kang in the lead as Ok-nyo, who was awarded Best Actress at the Venice Film Festival in 1987, which at that point was the first international honour for a Korean film in nearly 20 years. An important step in getting not only Im Kwon-taek, but Korean Cinema in general recognised across the world.

Im Kwon-teak: Run Far, Fly High, a retrospective of the director’s work, including Surrogate Woman, is currently taking place at ICA and BFI Southbank in London.