Swordswomen Three is another slice of early 1970s Shaw Brothers martial arts action, and another sold on the idea of revolving around female protagonists, in this case played by Lin Jia (Return of the One Armed Swordsman), Shen Yi (Killer Darts) and Pan Ying Zhi (one of the studio’s top talents of the time, also in When the Clouds Roll By and The Jade Faced Assassin).

The plot follows the titular warrior sisters, Ruo Lien, Ruo Lan and Ruo Mei whose clan protects the famous mighty steel sword, a powerful weapon much sought after by their rivals, in particular the nasty Chu Tien Hsiang (played by the legendary actor Lo Lieh), who aims to use it to become number one in the martial arts world. Infiltrating the trio with his cunning schemes, he seizes the blade and sets about eliminating its rightful owners as the girls band together to bring him to justice.

Despite the film’s title, it has to be said that the female leads aren’t really the focus of Swordswomen Three, with director Shen Chiang (Immortal Warriors) being equally concerned with the male characters, to who he gives most of the battles, notably the final bloody and impressive bamboo forest duel. Indeed, even the villains are given just as much screen time, though they are thankfully a colourful, interesting bunch, with Lo Lieh seeming to have a lot of fun as head rascal Chu Tien Hsiang, a truly ruthless rogue (as evidenced by his bragging that he would kill his parents to fulfil his goals), possessed of crazy mind powers and backed by a motley crew which includes the thuggish but dumb ‘three bullies’ and a hooded female ninja who puts out the eyes of anyone who sees her horribly disfigured face.

Of the three swordswomen, Ruo Mei is the only one who really gets a chance to show off her martial arts skills, and even she is portrayed as being just as likely to use feminine whiles to get her way, trying to play off different factions against each other instead of slicing through them with her sword. Her two sisters spend most of the film simply standing around and talking, with Ruo Lan in particular being pretty naïve, falling for the villain’s charming chat despite his obviously evil intentions, a development which rather undermines any potential feminist subtext.

This isn’t much of a criticism as such, merely a note that Swordswomen Three is somewhat different to expectations, and it certainly works well as a tale of clan intrigues and struggles, with plenty of deceptions, shifting allegiances and misunderstandings. The plot is complex and engrossing, playing out in relatively unpredictable fashion, and as such makes for a nice change for anyone who only associates Shaw Brothers films with straightforward tales of invincible heroes. 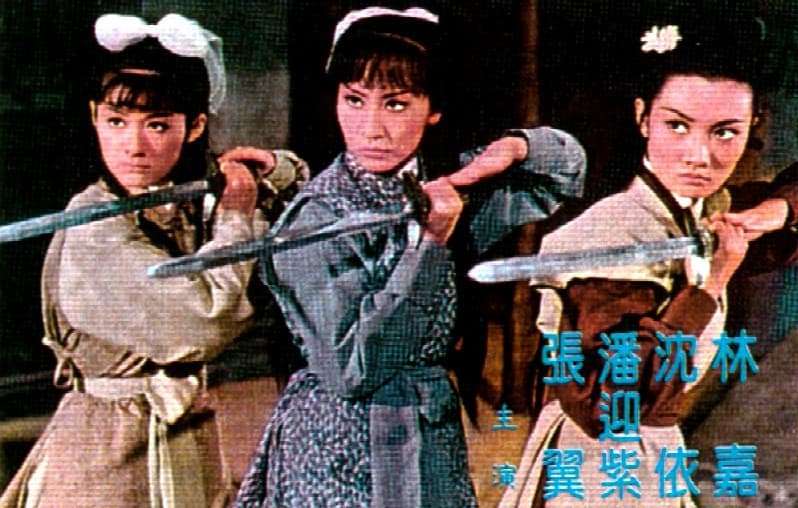 Slightly more distracting are the film’s fantasy elements, including the mighty steel sword’s amazing magnetic powers which strip the weapons out of opponent’s hands, and the characters’ flying abilities which seem to come and go through the running time, though perhaps this is due mainly to the wire-work, which is somewhat variable in quality. All of this is at odds with the most of the basic martial arts brawling, which thanks to some good work from Lau Kar Leung is well-choreographed and gritty, with plenty of spouting blood geysers and mutilated limbs, especially during the intense final fight. There is a good amount of action throughout, most of it swordplay as might be expected from the title, and the film does make for pretty exciting viewing.

Although it goes without saying that Swordswomen Three is a must see for Shaw Brothers aficionados and should entertain any fans of the genre, it’s perhaps not the best place to start for newcomers to the form. Above average without being particularly outstanding, it’s not quite up to the standard of the studio’s proper girl power martial arts epics such as the classic The 14 Amazons, which offer a little more substance along with their thrills.