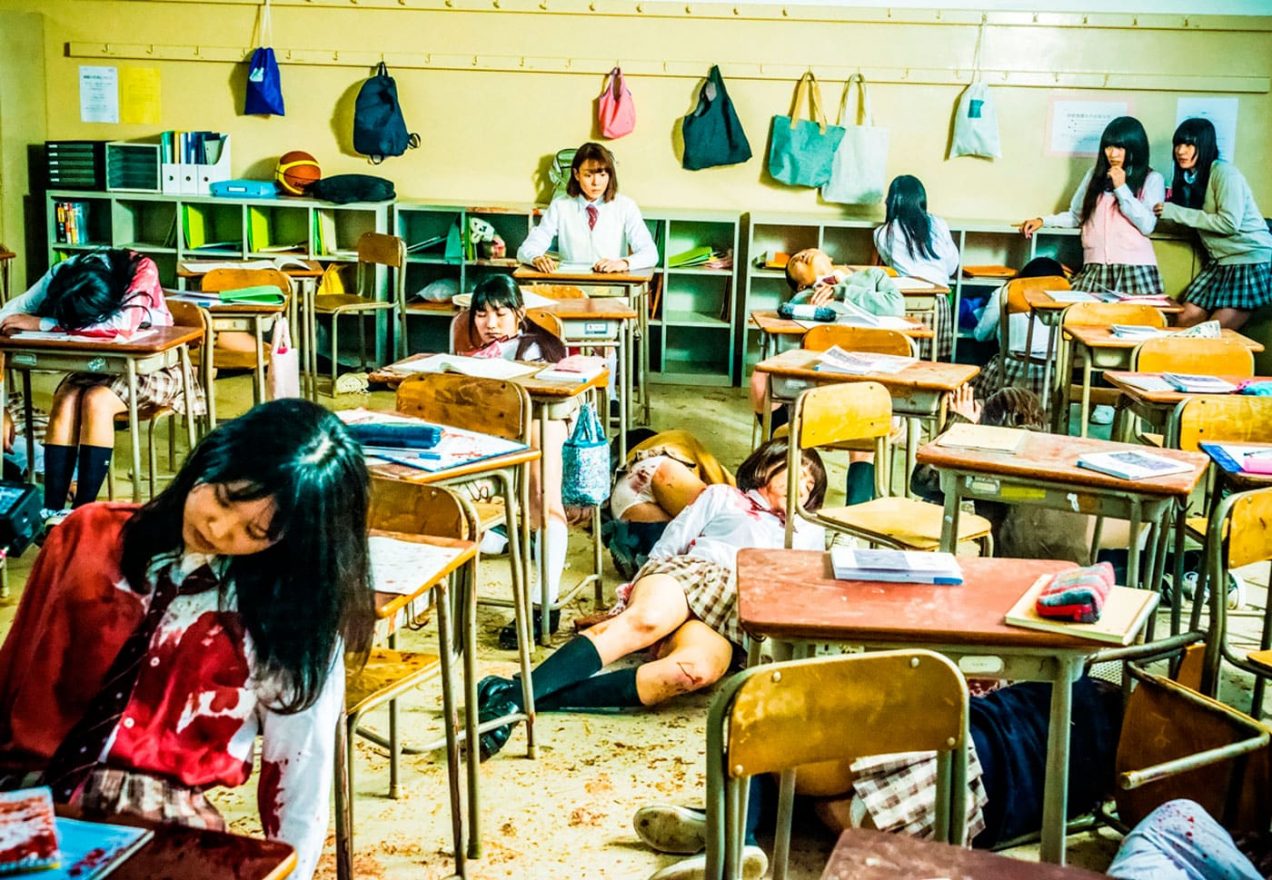 Sorry, schoolgirls. You ‘ve all been too obnoxious so we’re reducing your numbers!…

Tag, you’re it! Now we have another Sion Sono film to review and that’s one out of six in 2015 alone! Only this time, he’s venturing into the genre of teen survival genre once again since Suicide Club and Noriko’s Dinner Table. Over the years since Love Exposure, Sion Sono has been accused of misogyny due to the many sexual references and portrayals of women in his films. And in 2015, he doesn’t appear to stop restraining himself from doing so, which is quite evident in his other 2015 film, The Virgin Psychics. But in Tag, he does something incredibly transcendent that makes this film so much more than expertly made exploitation that just goes to show that Sono is one of the most daring filmmakers today.

Reina Triendl stars as Mitsuko, a timid girl who resides in her own shell and who writes poems. One day, she is on a bus with all her female classmates on their way to summer camp but a cataclysmic event occurs and changes the lives of Mitsuko and others forever. Surreal and strange things happen to the point where the rules of living have been bent, shocking bouts of violence are brought about in a sudden fashion and this all occurs exclusively with all females. What is it that Mitsuko got herself into? What is it that females got themselves into? Can all of the girls get out of it?

I realize that the synopsis that I wrote is incredibly ambiguous but I sincerely do not want to provide any spoilers since the film should be best experienced without any prior knowledge. I also loved the fact that the theatrical trailer does not spoil any of the film’s events. Having said that, the story is simply outlandish. Although it is based on a manga, Sion Sono apparently has never read the source material and only used the premise as an entry point to his own creation. And boy, was it a creation. The film is essentially a chase movie not much unlike Mad Max: Fury Road and it could’ve easily been seen as an exercise in gory exploitation no different than a grindhouse film, but Sono adds themes and elements that vilify the idea of female glorification. And this is a surprise considering that Sono is very guilty of the glorifying himself. Everything from the Japanese schoolgirl culture (or JK, as it is referred to in Japan) to video games to films, Sono takes them down and tears them a new one in funny and thought-provoking ways. Funnily enough, there is no male actor in sight until the third act, but even then, the only male actor that is seen before then, his face is covered with something, for a lack of a better word, bovine. All of the seemingly random events coalesce into an ending that borders out of this world.

Special mention goes to the cast, who add life to their supposed archetypes. Reina Triendl is a dynamo as Mitsuko and she really sells fear and shock that easily engenders the audience’s sympathy. There’s a scene in the climax where she questions her identity and her self-being that almost made me want to hug her. Mariko Shinoda is Keiko, a woman who is a bride-to-be, veering towards the edge of anger and insanity. She has one of the best moments in the film when she has to fight her way out of her own wedding and the special makeup effects in this scene by gorehound Yoshihiro Nishimura is spectacular to behold. Erina Mano (who is Sono’s new muse, appearing in FOUR of his films this year alone) is great as Izumi, a marathon runner who has more intentions than just running to win. Their roles are great enough but what is amazing is the fact that they are technically relaying the same role through different parts of the film, and they are all in sync with the character’s development. They are all running away from something not only is a genuine threat but it could be something that metaphorically reflects an event in a person’s life that recalls the path from a teenage life to adulthood, and to witness themes like this in a film as bizarre as this is what makes Sono such a great filmmaker.

The supporting cast are also great in their roles but the biggest standout is Yuki Sakurai as Aki. Working with Sono for the second time after the Minna Esper Dayo TV series, she exudes loyalty and courtesy as well as strength to do anything to protect what is dearest to her and when she starts to fight back against the evil forces, it is a hilarious, shocking and fist-pumping delight. She adds heart alongside Triendl that I bet you that everyone would want a best friend like her. What I also admired and enjoyed was the cinematography, which was done by drones. The aerial shots wring tension and always give a sense of dread, implying that something is always following the characters. The music is also great with its use of rock music and it adds to the almost hypnotic proceedings, especially when the film starts to feel nostalgic or eerie.

After watching this film, I wondered if this is the movie that director Zack Snyder tried to make with Sucker Punch, since it shares the same agenda of vilifying female glorification in the media. But unlike Sucker Punch, the world of Tag is much more haunting, immersive and downright gutsy in its execution. This is by far the best Japanese film I’ve seen this year. A film about a girl’s journey for survival that consistently surprises, shocks, thrills, ridicules and provokes all at once all in a scant running time of 85 minutes.

Tag is available on UK Dual Format (Blu-ray and DVD) from Eureka Entertainment.