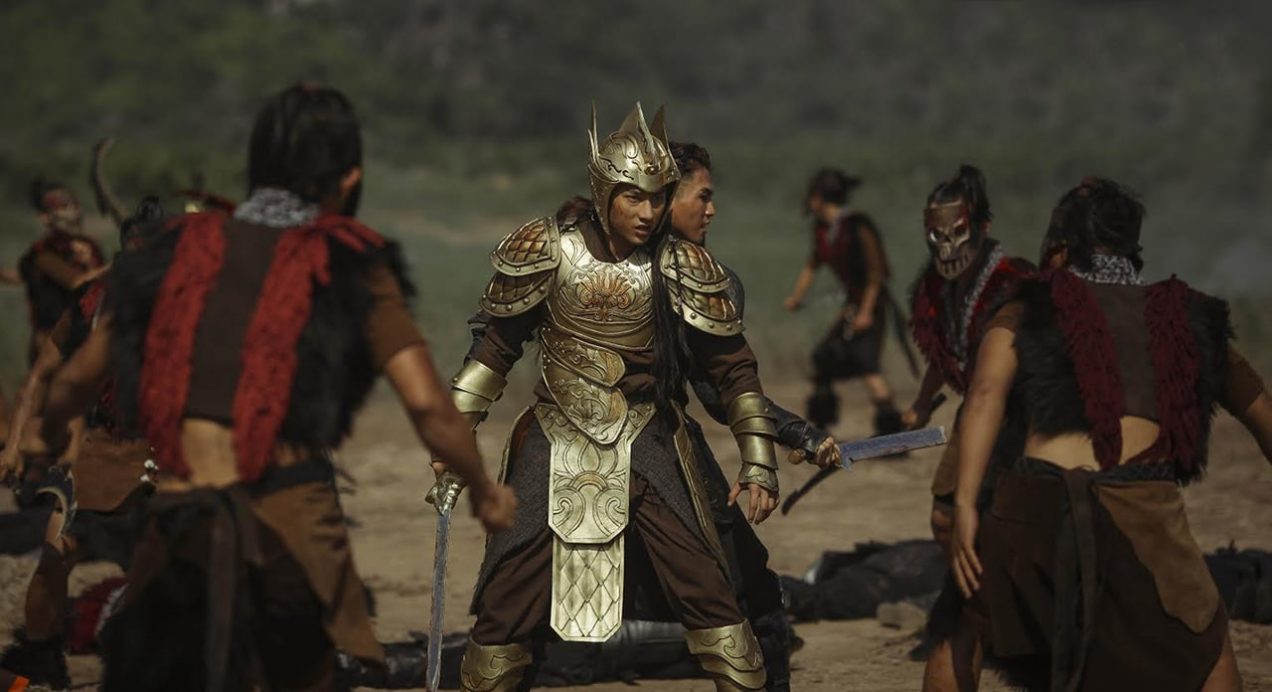 A modern adaption of a traditional Vietnamese fairytale, which in itself is just a variation of the Cinderella story, Tam Cam: The Untold Story is a charming modern fantasy-action film for all audiences. Directed by Veronica Ngo, an interesting point in the film is that Ngo wrote new ‘untold chapters’ of the fairytale into her script, specifically so the boyband 365 she manages can all have headline roles, and updating the story for modern audiences (whilst attracting in ticket sales from teenage girls).

Sticking close to the original fairytale, we follow Tam (Ha Vi) who’s a kind and pretty girl that’s abused by her evil stepmother Di Ghe (Ngo) and her stepsister Cam (Ninh Duong Lan Ngoc). Essentially, she’s forced to do all the chores since her father died, and just like Cinderella the stepfamily are absolutely terrible towards Tam. Regularly punished for making minor mistakes, which are normally the fault of sister Cam, the film quickly establishes the family are horrible and Tam can do better. After a quick swish of her campish Fairy Godfather’s wand (yeah, don’t ask…) and she’s whisked to the ball (the royal palace where the Prince is holding a ‘wife finding party’) on a white stallion with golden slippers. After some twists of fate, Tam finds herself married to the royal prince once the slipper fits.

Deviating from the Vietnamese Cinderella tale, swathes of new additions enter the film at this point. There’s an evil minister who is a demon in disguise trying to manipulate the king and steal the throne, there is a new plot-thread where the kingdom is forced to attack its neighboring domain, new male friends (played by the boyband), and some magic ritual which is never actually explained fully. There’s also some hints of reincarnation thrown in for good flavor, and ultimately the love story wraps up in favor of good and justice for all.

One thing that stood out for me in Tam Cam: The Untold Story was how the script felt polished and well blended throughout. There are quite a lot of action points in the film to get your head around, with multiple side-plots weaving through the main narrative and it could be easy to get lost, however the scripting of Veronica Ngo is definitely on point as the war and politics are mixed in finely with the traditional fairytale and family elements. Most of the actors play simple fairytale characters with little padding, but for a film like this you never expect the depths in personality of a Ken Loach film. Tam Cam: The Untold Story is what it is, a modern fairytale for all audiences that is succinctly told.

Whilst the film is well scripted, that’s not to say it’s a pleasure all round. Some of the drone shots are noticeably cheap and the overall colour grade on the film could do with some sprucing up to blend in. The wirework and stunt choreography is a lot of fun to watch, but becomes almost cartoonish and repetitive in extended sequences. Also for a film about Tam, as she’s in the title, she’s remarkably forgettable and boring when off-screen. The updated side plots added to this reimagining of the classic fairytale are actually more interesting than her time-worn ‘peasant girl marries prince’ Cinderella sob story. The CGI gives a certain sense of epic scale to battle scenes and large palace sets, flying through valleys and battles with hundreds of digital fighting characters, though the actual physical filmed battle scenes feel empty when contrasted side-by-side in shots.

What strikes me the most about Tam Cam: The Untold Story is that it feels a lot like recent Western fairytale reinvigorations, such as Cinderella from 2015. The film plays out for all audiences enjoyably, but there’s enough here to feel fresh and like you’ve not caught the tale before. One thing is for sure, it’s pretty enough in the scenery and wire kung fu to deserve two hours of your time.