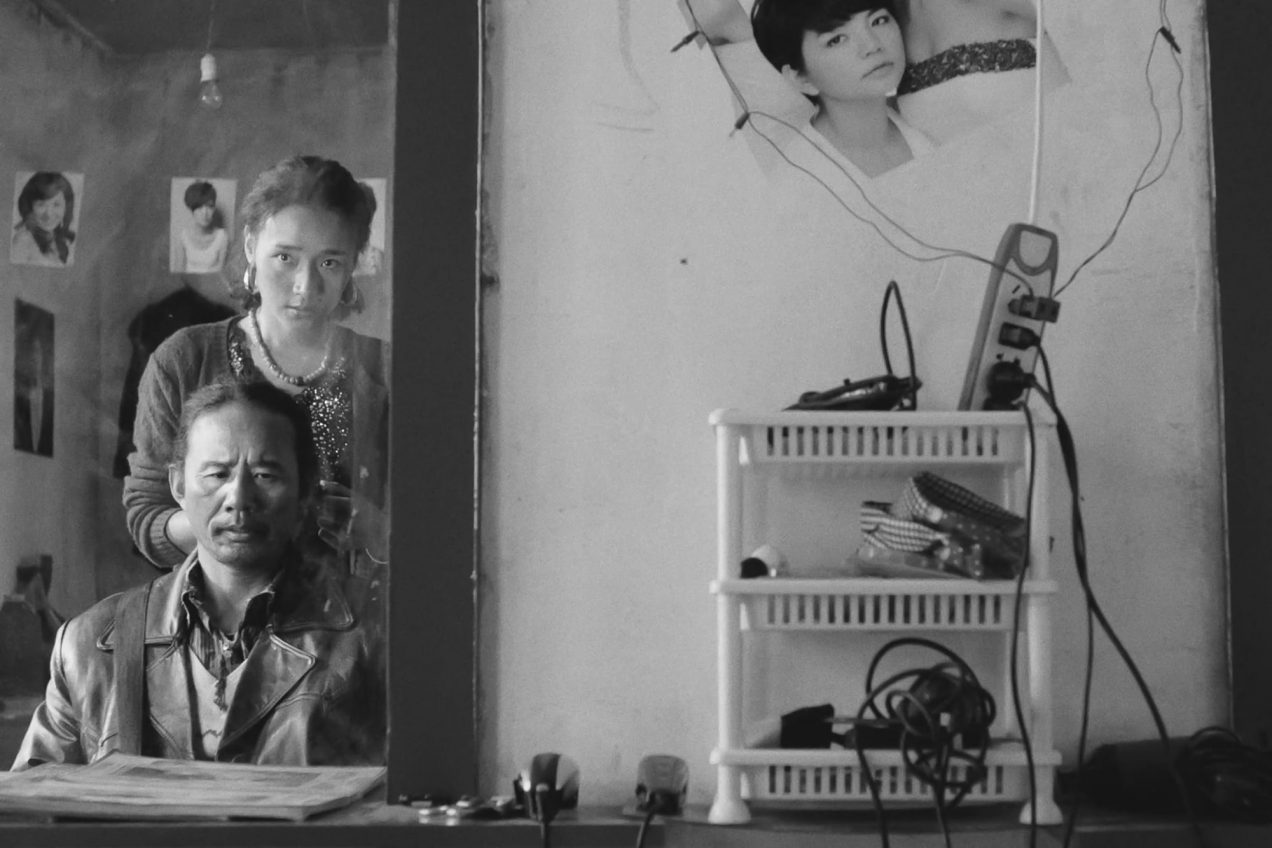 Tharlo is less a movie about the person named Tharlo than it is about how Tharlo comes into being.

Nicknamed “Ponytail”, the 40-something year-old orphaned shepherd (Shide Nyima) lives a life of hard work and brutal isolation in the Tibetan grassland. The film opens with him reciting, in heavily-accented Mandarin, one of Chairman Mao’s speeches he memorized in school, at the bequest of a local police officer. Tharlo is at the police station because he’s been asked by his village chief to apply for an ID card, a concept as foreign to him as that of a karaoke bar, and for this he needs to go into town for a photograph. Though it’s not exactly a bustling metropolis, his long matted hair, look of perpetual befuddlement and the baby sheep he carries everywhere make him stand out – in a bad way. He inadvertently charms a young hairdresser (Yangshik Tso), who seems as fascinated by his strangeness and she is by how much money is in the sheep others entrust him with, and Ponytail agrees to accompany her to a karaoke bar. He gets drunk, and wakes up the next morning in her bed. He is stoic and sombre and she rattles on about their future together. His first instinct is to go to the police station and say he thinks he met a bad person in the city, but he can’t articulate just what exactly he believes happened. He goes home, and we get a taste of the dreariness of his daily life: the loneliness set against the long horizon of the grassland, his sheep his only company, the nightly ritual of lighting firecrackers to scare away the wolves, and getting drunk listening to the one folk song he knew well enough to sing to Yangtso at the karaoke bar. One day, some of his flock are killed overnight, and he reassesses his life. He leaves everything behind to go back to the city, and to Yangtso. He cuts off his ponytail – his namesake – but when things take a sharp turn, he’s more lost than ever.

There is a sense of precision in Tharlo, in that all the details are justified: it is very much an intentional representation of what Tseden sees in Tibet today. The film is shot in black-and-white to lend a “ruggedness” to the ambiance, and great attention is given to harsh details, from a close shot of Tharlo’s dirty feet tapping to the sound of the music to the (very graphic) disembowelment of the dead baby sheep. Paradoxically, all displays of intimacy between the two main characters are shied away from the camera, including a chaste kiss in which we only see them from the chest down. There is room for violence, but not for love. The camera stays fixed as the characters come in and out of the shot, sometimes from behind the screen; it is precise, staged and aware, but the characters’ exchanges are made to feel very organic. The real accomplishment is the sound engineering, which makes the rural/urban juxtaposition of the story truly come alive. As Ponytail crosses the street from the photo studio to the hairdresser, we hear cars honking, flies buzzing and two radio stations blasting Tibetan folk songs. The result is the feeling of being fully immersed in the very particular and intentionally constructed scenery that is this unnamed small town hidden somewhere in Tibet.

Modern-day China is a minefield for fiction about impossible urban aspirations in middle-of-nowhere dusty settings, and we might have other juggernauts like Jia Zhangke to blame for the unsatisfying ending. What usually happens after disenfranchised characters are put through the wringer of modern citizenship is that they react violently in an attempt to reassert themselves; but Tharlo loses everything, gets off his motorbike and stares at the mountains. He tells the police officer he won’t grow his hair back, so the transformation from Ponytail to Tharlo seems definitive. But while that transformation was supposedly necessary, we’re left wondering if it was humane. Ponytail might not have had an ID card with a normal, Tibetan name on it, but he had a livelihood and a cultural identity; whereas Tharlo has forgotten his repertoire of speeches, his one souvenir from formal education, and shaves his head so that no one will recognize him. The ID card is a particularly intelligent device through which Tseden questions the meaning of identity. The need for an ID card is justified by the fact that “other people need to know” who Tharlo is; he should be registered and accounted for like any other Chinese citizen. To this, he replies “I know who I am. Isn’t that enough?” It isn’t, and after his awakening, he decides to shave his distinctive ponytail so that “no one will know who I am”. The new modern Tibetan identity is at once identifiable and nondescript; it is individual, yet unremarkable. Perhaps the films unsettled ending is meant to reflect its protagonist’s own struggle: where does he go from here?

Currently screening across the UK, and screens at the 10th Five Flavours Film Festival 2016, which runs from 16-23 November 2016. Tharlo will released on DVD by Day For Night.

Joana Matias
Writer and Gender Studies MA student interested in East Asian films with something to say about gender and sexuality.
Read all posts by Joana Matias