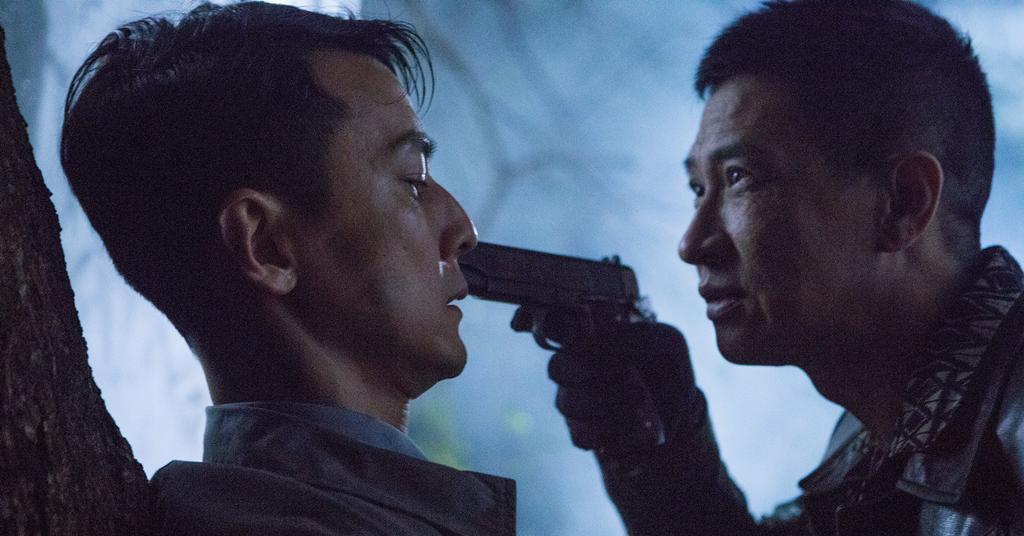 Long hailed as one of Hong Kong’s top genre directors, who really hit his stride following his 2008 hit Beast Stalker, Dante Lam has over the last few years moved into propagandist Mainland military fare, helming blockbusters like Operation Red Sea, The Rescue and The Battle at Lake Changjin. For some viewers at least this is a real shame, as Lam had carved himself a reputation for hard-edged, morally challenging thrillers which harked back to the glory days of HK cop films, the likes of which he’s unlikely to be making again anytime soon. The last of these before Lam’s transition was the 2014 That Demon Within, which again saw Lam teaming with acclaimed actor Nick Cheung, a wild psychodrama with horror touches and violent action sequences that follows the descent into madness of a troubled cop.

Daniel Wu plays Dave Wong, an uptight Hong Kong police officer currently side-lined to a quiet security job in a hospital. One night his life is thrown into disarray after he agrees to give a blood transfusion to a seriously injured man (Nick Cheung), who turns out to be Han, the leader of the criminal Demon Gang, responsible for a recent spree of violent heists. Blamed by his colleagues for saving the life of a cop-killer, Dave finds himself cracking under the pressure after Han escapes, past traumas resurfacing, and when the bodies of the other gang members start piling up he begins to question his sanity as he tries to track down the murderer.

That Demon Within has a few things in common with Lam’s previous film, the 2013 MMA drama Unbeatable, in so far as it’s a character study following a protagonist attempting to overcome pain and tragedy, albeit one which takes a very different and more tortuous route to catharsis. Though the story is essentially a fairly traditional meditation on the time-honoured theme of the evil within, Lam throws a great many balls in the air to make things more interesting, trying to keep the viewer guessing whether Dave is suffering from violent mental illness, is demonically possessed, or whether Han is actually helping him out as part of some weird homicidal blood-bonding. Lam is generally successful in blurring the lines, and while the film doesn’t always make much sense and is at times wackily pretentious, it’s fun and challenging in a manner which few recent genre films have dared to be – at least until the final act, when too many flashbacks spoon-feed the viewer a conclusion which while vaguely fitting would have been better left ambiguous or esoteric. As a result, Lam doesn’t really say anything new, and for all its pseudo-spiritual bluster, the film is perhaps a little underwhelming in its narrative and ambitions.

Thankfully, Lam is on great form behind the camera, and makes up for the film’s pedestrian philosophising with some sharp, hard-edged direction, throwing in some superbly choreographed action set pieces. The film is very violent in places, with some shockingly brutal shootouts and splatter scenes, making it one of the more bloody Hong Kong offerings of late and giving it a pleasingly old school air of wild carnage. Lam’s direction is highly stylised throughout, reflecting the state of mind of its protagonist through creative editing, odd use of light and shadow, and excellently lurid colours, all of which make for some impressive acid trip visuals and give the film a bold, distinctive look. It also benefits from some sinister, macabre touches that recall the genre blending Hong Kong ghost/thriller films of the 1980s and 90s, the criminal gang working in the funeral industry giving Lam an excuse to include shots of mysterious rituals, dead bodies, and creepy demon masks.

Perhaps unsurprisingly, it’s the two lead performances which anchor the film, Daniel Wu and Nick Cheung managing to ground the film (to some extent at least) and to add the kind of sympathy and psychological substance needed to keep the viewer engaged. Though both actors are playing characters that at times feel suspiciously like little more than exaggerated ciphers, Wu does twitchy and traumatised to wretchedly believable effect, generating sufficient interest in his struggle. Cheung, meanwhile, grabs the attention and steals most of his scenes with an intense, leering and suitably devilish turn. The supporting cast also do their bit, Andy On dependable as usual, Christie Chen fine as the possible love interest, and Lam winning points for employing a number of faces likely to be familiar to HK cinema aficionados.

Flawed though it might be, and not as deep or mysterious as it seems to think, there’s a lot to be said for That Demon Within, and it’s hard-edged and crazed enough to commend it to action fans keen to look back at Lam’s pre-Mainland blockbuster work. Violent, flashy and well-acted, the film is more than just another cop thriller, and is a great example of the kind of hard-boiled genre fare Hong Kong used to be so well-known for.