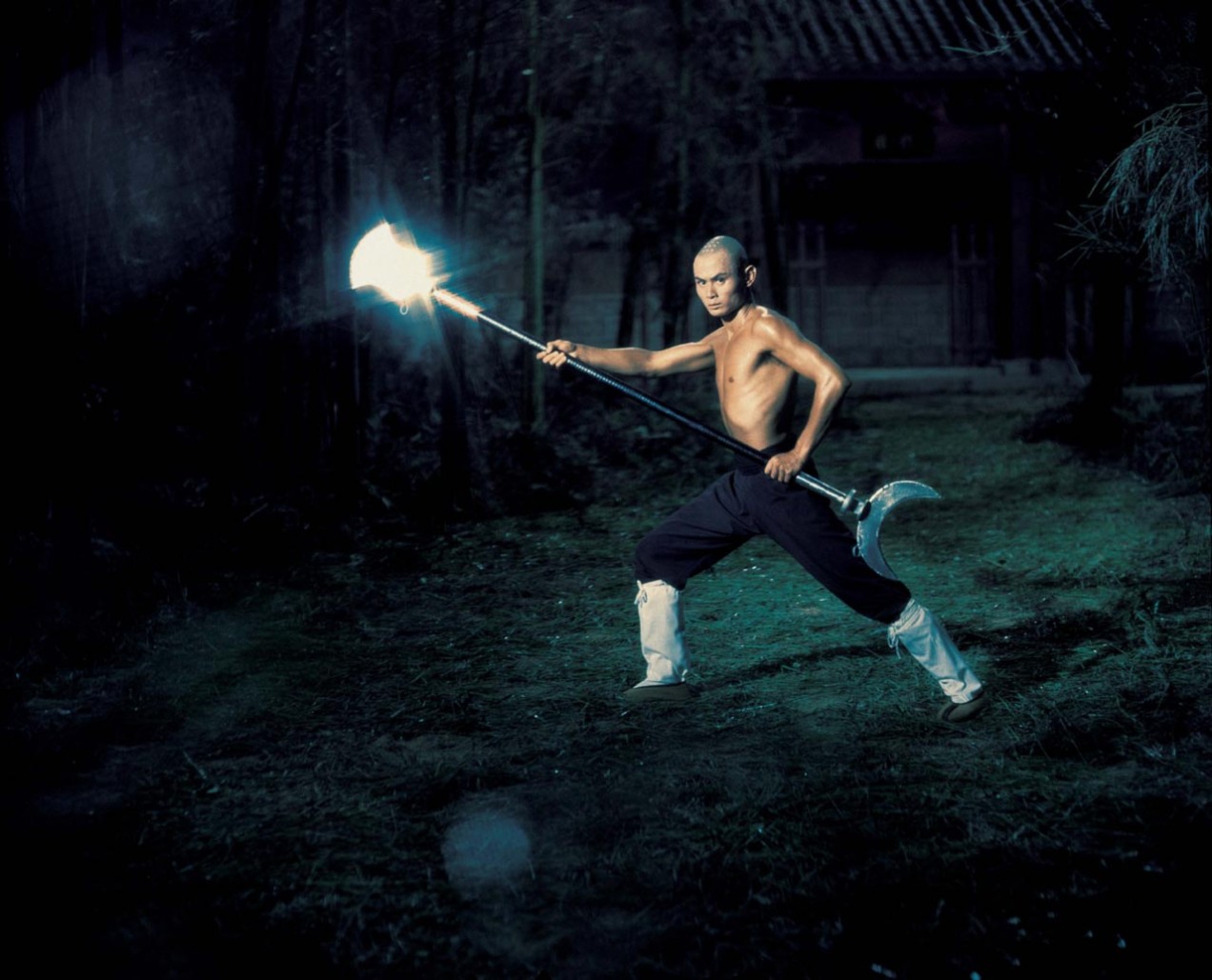 Though Gordon Liu is better known as both the arse-kicking monk and Lucy Lui’s Japanese henchman in Kill Bill, it was the 36th Chamber of Shaolin, directed by his adopted brother Lau Kar-leung (aka Liu Chia-Liang), that catapulted him into stardom in the late seventies. A popular take on the founding myth of the kung fu genre – how Shaolin fighting techniques were spread throughout the common people – this is far more than your typical vengeance movie.

36th Chamber tells of Chou Chen-chi, a naive Han Chinese student instigated into revolt by his teacher against the Manchu oppressors of the Qing Dynasty. Chou soon finds himself out of his depth, his family and friends have suffered and now he himself is on the run from the Manchu. Wishing he had the strength of the Shaolin monks, he seeks refuge a temple in the hope of being allowed to learn their techniques and get revenge.

It’s a long time before the monks allow Chou, now known as Sun Te (three virtues) to participate in their special training – the fabled 35 chambers of Shaolin. Each one contains a gruelling test that must first be bettered before the student can go on. At first Sun Te is at a loss to see the connection between it and the fighting he so desperately wants to learn, but his determination carries him through. The psychological journey he makes, away from the weakness of his quest for revenge, is far more powerful than the physical one. It’s the purpose of their teachings.

Sun Te’s progress through the chambers is amazing, but when he suggests setting up a 36th Chamber that would allow him to pass his teachings on the general populace they banish him from their order. Back in the world outside, Sun Te soon finds disaffected youths much like he was, eager to learn his fighting techniques to bring the Manchu tyrants to justice. 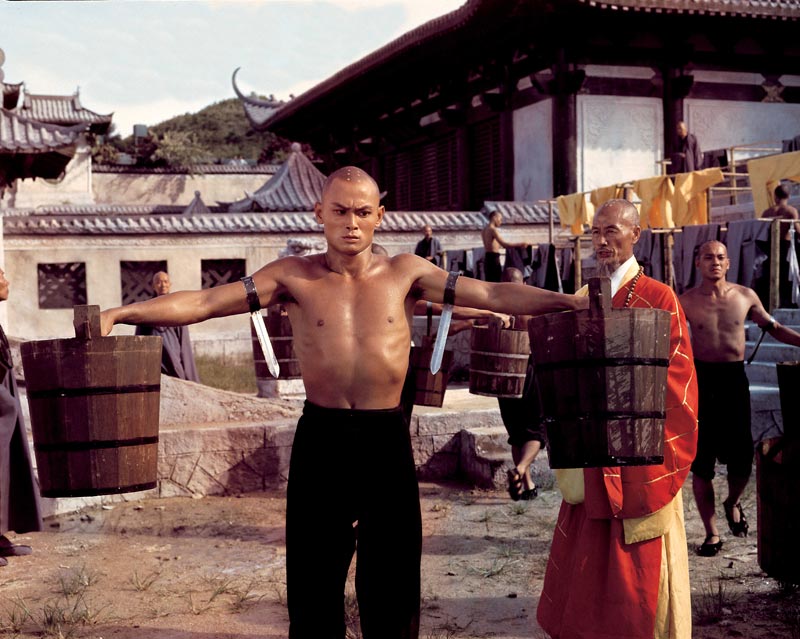 The themes of 36th Chamber are a world away from the kung fu films that dominated the market in the seventies. It’s so much more about the personal journey Sun Te undertakes than just revenge on his persecutors that the obligatory crowd-pleasing last reel, where they are finally and spectacularly brought to justice, all but feels uncomfortable against Sun’s obviously higher state. That the screenplay came from Ni Kuang, who together with director Chang Cheh moulded that cinema of vengeance in Hong Kong, might be surprising – but probably had a lot to do with director Lau Kar-leung.

Lau Kar-Leung had been one of the foremost martial arts choreographers for a long time before taking the directors chair himself for The Spiritual Boxer in 1975. For Lau the psychology behind the martial arts was just as important as the physicality, that his protagonists undertake spiritual journeys where they truly grow and learn as human beings, was something he wanted to bring to his audience. For him martial arts was more than just movies – it was a way of life – and for a man who could trace his martial arts linage to Wong Fei-hung, a real-life Chinese folk hero, that meant everything.

Against the overly complicated and even baroque action of contemporary Shaw Brothers produced films, Lau neatly paired back the story to tell it simply but well. The tone of the film is refreshingly airy, as the character transcends aggression Lau too escapes the confines of the studio for the outside world – rarely seen in SB movies by that time. The fighting, as you might expect, is stunning, but so too is the inventiveness of the chambers. Initially seeming irrelevant to fighting skills, their significance is made all too clear by the end. It’s here that Lau places the most importance. Filming the trials of Sun Te as he repeatedly attempts to pass through the levels, he shows us enough to make the point, but not so much as we get bored. (No, we don’t see ALL 35 chambers!)

Supported by a cast that includes Luo Lieh in wonderfully grimacing form as one of the evil Manchu generals, Gordon Liu is well cast as the innocent student who attains knowledge and learning. Unsurprisingly 36th Chamber was Shaw Brothers number one hit of that year, and led to many sequels (including Return to the 36th Chamber, Disciples of the 36th Chamber) and imitations. The most obvious is The Shaolin Temple, the motion picture debut of a young Wu Shu martial arts champion by the name of Jet Li. Following both the template and story pretty closely, The Shaolin Temple was almost as popular a franchise as its predecessor, spawning Kids from Shaolin and Martial Arts of Shaolin (directed by Lau Kar-leung himself) and in turn made a star of it’s lead. 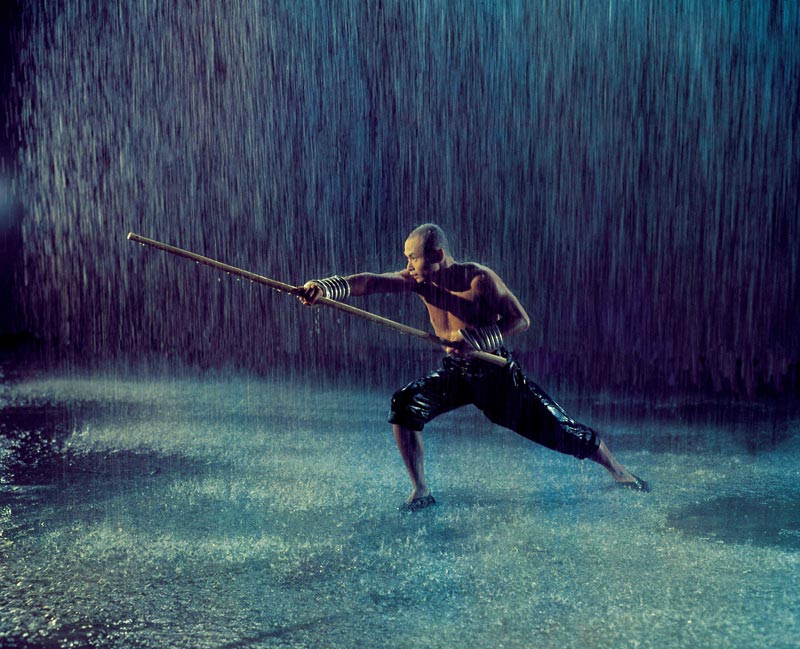 With its innovative look into the secretive world of the Shaolin monk, one previously often derided and feared, it had a deep felt effect on Hong Kong cinema. In Tsui Hark’s Jet Li lead take on the Wong Fei-hung legend, Once Upon a Time in China, his highly idiosyncratic band of students echo the assorted youths who come to learn under Sun Te. Whereas another Jet Li vehicle, The Tai Chi Master is evocative of both the Shaolin life and the lead character attaining greater wisdom. The impact of 36th Chamber is clear, it’s a deserving cult classic.

Lau Kar-leung and Gordon Liu collaborated again on several films, including Eight Diagram Pole Fighter, Dirty Ho and 18 Legendary Weapons of China, though neither quite achieved the success due to them. Lau all but left cinema behind him for nearly a decade after ‘creative differences’ saw him sacked from directing the Jackie Chan vehicle Drunken Master 2. Though he’s recently returned to directing with the first new Shaw Brothers production in years, Drunken Monkey. Gordon Liu on the other hand has never stopped making movies, even if the roles have been more minor, and it was Quentin Tarantino himself who asked him to appear in Kill Bill, though at the time Gordon had no idea who the was…!

The 36th Chamber of Shaolin screens at the BFI Southbank in July as part of the Swordsmen, Gangsters and Ghosts strand. A Century Of Chinese Cinema continues at the BFI until mid-October.

The 36th Chamber Of Shaolin was released on UK DVD by Momentum Pictures. The film can be downloaded from iTunes in HD quality, part of a growing collection of Shaw Brothers movies on iTunes.

The new DVD from Momentum combines Celestial Pictures great restoration with the US Dragon Dynasty release’s bucket load of extras!

These include: an audio commentary by Wu-Tang Clan’s very own The RZA and film critic/scholar Andy Klein; an interview with star Gordon Liu; “Shaolin: A Hero Birthplace”; interviews with The RZA and film scholars David Chute and Andy Klein; stills gallery; trailer gallery; commentator biographies; and, allegedly, a concert video for Wu-Tang Clan’s “Gravel Pit” – though I’m damned if I can find it.

Another great restoration from Celestial Pictures, and for once the translation job is pretty good. The disc includes a smattering of additional features.