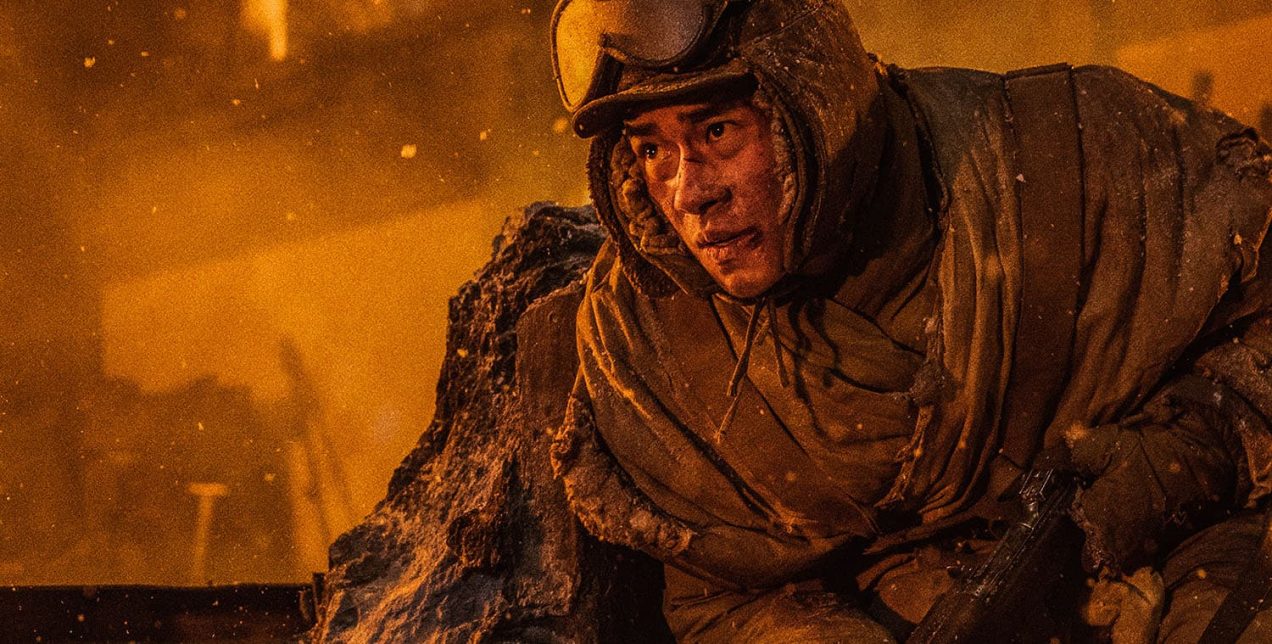 Chinese military propaganda blockbusters keep getting bigger and not any better…

The second best-performing production in 2021 worldwide box office, The Battle at Lake Changjin, is back with a sequel. Timed to the occasion when millions visit cinemas over a weeklong Chinese New Year holiday, The Battle at Lake Changjin II, also called Watergate Bridge, has so far raked in USD$300 million within the first four days of its release and is currently the highest-grossing film of 2022 worldwide.

The new instalment directly carries on the action of its predecessor and tells the story of the same People’s Volunteer Army soldiers whose mission now, having seized the US airbase, is to destroy the titular bridge and block the US troops in retreat from the Korean War or, as it is known in China, the War to Resist U.S. Aggression and Aid Korea. As the Chinese soldiers devise ways to take over the bridge and detonate it before their enemy’s main force arrives, their American counterparts on the bridge sets a trap to lure them in.

Unfortunately, for viewers who expect a different, if not necessarily improved, film than the first, Battle II is itself a trap. After all, it mostly consists of Tsui Hark’s parts that they simply couldn’t fit into the already bloated three-hour first instalment. Since this peculiar editing strategy reportedly saw Tsui directing 90 percent of the sequel, the two other helmers of the first title — Chen Kaige (Farewell My Concubine) and Dante Lam (Operation Red Sea) — gave up their director’s credits a week before Battle II’s release.

The film literally begins with a recap of Battle’s events, testifying to the unmemorable plot, drawn-out length, and underdeveloped characters of the latter. If Battle’s running time was excruciating, Battle II’s proves worse. Despite being half an hour shorter, its sheer lack of story cannot hide behind the nonstop explosion and tiringly exalting music for two and a half hours. Without new characters, new (sub)plots, and Chen’s melodramatic touch, the feature can be said to be a single extended battle sequence. And without Lam’s hand-to-hand combat scenes, the large-scale fights come off as dull and repetitive.

The story is that of David and Goliath. It could not have emphasized more strongly that the ill-equipped but brave Chinese troops faced against the most technologically advanced army of the U.S. As the protagonists steal cannons from the American soldiers to attack the latter’s airbase, one of the Chinese troops remarks, “In the future, we will have our own planes way better than theirs.” To which another replies, “Just a matter of time.”

Although the visual effects are less incoherent and truly stunning at many points, Tsui’s almost narcissistic indulgence in the explosions, slow motions, and substantial amount of gore (tank shells and fighter bullets reduce Chinese soldiers to pulp, quite literally) bores perhaps even his biggest fans. That whether the effects are realistic in terms of scale is just as much, if not more, important than whether they are realistic in terms of likeness seems to go right over Tsui’s head.

To sustain such extravagance, the main protagonists are given a plot armour so heavy that the result is as if watching them play Call of Duty on the easiest level. With a simplistic plot overstuffed with CGI-laden action scenes, Battle II is like an essay with a single paragraph and too many examples and gives the impression of the tail wagging the dog.

Besides the impressive visual and special effects, another marked improvement is Jackson Yee’s performance. He feels much more at home as a more mature Wu Wanli now that he doesn’t have to play the unruly teenager from Battle. Wu Jing plays his brother Wu Qianli, more or less the same character he’s been playing for years only with a different name each time.

The script by Huang Jianxin (1921), Lan Xiaolong, and Quji Xiaojiang doesn’t do justice to its normally talented cast and simply doesn’t let them bring to their characters anything other than patriotism, in the form of the display of their own suffering and the determination to make their enemies suffer. So much so that the characters even seem replaceable or interchangeable, with some sacrificing themselves in identical ways in both movies.

This time around the dialogue — not just between the American generals and soldiers, but also the Chinese protagonists — has minimal substance and whenever it starts to break down, the filmmakers resort to tearjerkers: one of the Chinese soldiers sacrificing themselves while shouting or saluting and the others looking at him with tearful eyes and, of course, with endless inspirational music in the background.

More ideologically- and politically-charged scenes abound. Before an assault on the bridge, the Chinese soldiers salute to the rising sun in the east and take turns saying, “Long live the People’s Republic of China.” Counting the deceased after an offence, the political commissar Mei Sheng (Zhu Yawen, Cliff Walkers) says, “Only nine party members remain in our company. It is a critical moment. Get yourself together.” One can’t help wondering how much better the situation would have been if there were the same number of troops but more party members among them.

In the end, however, Battle II fails not so much because of its overtly nationalistic message — different degrees of bias can be found in historical dramas and war epics of any nation — as due to its poor script that renders its characters and story nothing more than mere mouthpieces of that message.

The Battle at Lake Changjin II will be released in theatres in the USA, Canada, Australia, and New Zealand on February 11.