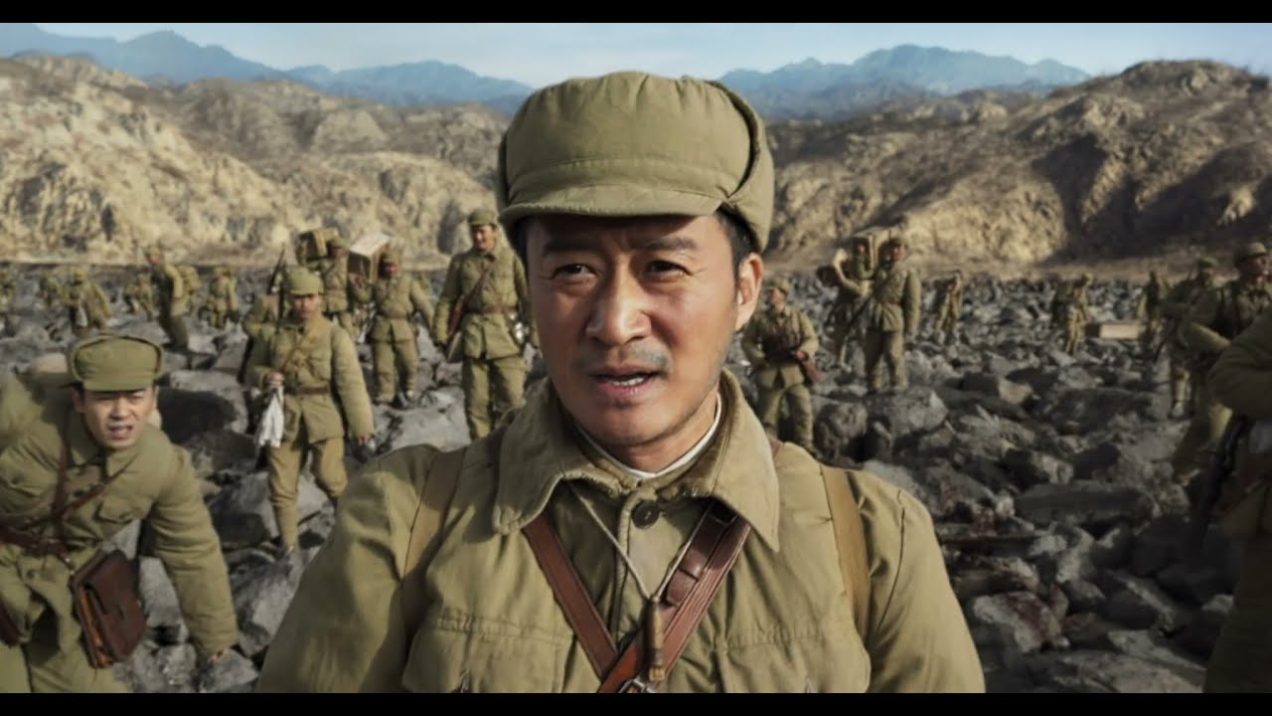 As Chinese military propaganda blockbusters continue to get bigger and more bombastic, The Battle at Lake Changjin takes the next logical step by bringing in not one, not two, but three of the biggest directors from the Mainland and Hong Kong in Chen Kaige, Tsui Hark and Dante Lam. Boasting a Hollywood-level budget of over USD$200 million, the film is very much a state-backed prestige production, apparently commissioned by various departments of the Chinese Communist Party and written by Lan Xiaolong and Huang Jianxin, a stalwart of patriotic Chinese cinema who also worked on the likes of My People, My Country, Mao Zedong 1949 and Beginning of the Great Revival, which gives audiences a pretty good idea of what to expect. Having broken records at the domestic box office, the film is now rolling out internationally, where it faces a bit of an uphill struggle thanks to its overtly nationalistic stance and the controversy surrounding accusations of historical inaccuracies.

The film is set during the Korean war, focusing on the two weeks of the Chosin Reservoir Campaign of the winter of 1950, when tensions were high on the Korean peninsula, with the communist North under threat from US troops led by General Douglas MacArthur. Aiming to head off a potential invasion, Mao Zedong (Tang Guoqiang, pretty much the go-to guy when it comes to onscreen Mao, having played him in The Founding of a Republic and a long list of other recent films) decides to send the People’s Volunteer Army of the new Chinese state to face off with the US at the titular lake, a move referred to in China as the ‘War to Resist US Aggression and Aid Korea’. Against this backdrop, Wu Jing, the Wolf Warrior himself, plays Wu Qianli, commander of the army’s 7th Company, who has to juggle his duties with looking after his headstrong younger brother Wanli (Jackson Yee, Better Days) – battles, bloodshed and patriotic death speeches ensue.

Audiences would be forgiven for thinking The Battle at Lake Changjin was going to be an anthology piece on seeing the powerhouse trio of Chen Kaige, Tsui Hark and Dante Lam all noted as director, and it certainly does feel like one at times, and like three different films chaotically thrown together. The bloated three hour running time also furthers the suspicion that the directors might well have been off making their own separate films, and the whole thing hangs together mainly by the grace of the fact that there really isn’t a story as such to be confused by, just a series of nationalistic vignettes and high-octane battle scenes. There are flashes of each director’s style, but without any focus, and none of them are given the chance to get to grips with the film or to make their mark on it, seeming to have been brought in specifically for scenes playing to their perceived talents, with Chen bringing the patriotism and melodrama, Hark bringing a touch of Spielberg-style Hollywood epicness, and Lam bringing the tanks.

While there’s no denying that The Battle at Lake Changjin was clearly a massive and ambitious undertaking, with sprawling locations, a tonne of war tech, a massive cast, a huge number of extras, and a legion of crew members behind the cameras, it never really amounts to anything engaging. This is partly down to the sense of inconsistency present throughout, with the visuals, style and pacing varying greatly, and with only the patriotic tone remaining constant – having a gaggle of six (or more) cinematographers, including Oscar-winning Hong Kong cinematographer Peter Pau, probably didn’t help in this regard, and though all manage moments that impress, their work feels uneven when stitched together. The special effects also vary greatly, from some admittedly jaw-dropping moments and solid use of enhanced backdrops and landscapes to laughably cheap CGI, reducing some scenes to video game cut scenes and fatally undermining what might have been thrilling set pieces. While hollow spectacle is at the heart of most Hollywood blockbusters, here it’s all so badly constructed that even the action becomes repetitive and pointless, and the film slumps quickly into dullness and is likely to be hard to sit through even for the most dedicated of viewers, not least due to the unnecessarily extended running time.

Another red flag for international audiences comes in the form of the film’s overtly propagandist nature, with its patriotic heart not so much worn on its sleeve as being plucked proudly from its chest and thrust in the viewer’s face in every frame. On this score The Battle at Lake Changjin arguably isn’t too different to war films from other countries, or to the type of World Police propaganda espoused by Hollywood and the likes of the James Bond franchise, though the main issue here is just how clumsily this is handled, almost to the point of parody. There’s certainly a difference between state-sponsored propaganda like this compared with cynically playing to the lowest common domestic denominator, and on this score the film borders on the ridiculous in terms of how broad its strokes are. While there’s a certain amusing irony in seeing China do to the US what Hollywood has done to pretty much every other country in the world at some point, what could have provided a different perspective on the prescribed roles of good and evil in global military conflict is treated with about as much substance and subtlety as 1980s US films about the Vietnam War or the likes of Pearl Harbour. Making matters even worse are some truly appalling acting from the western supporting cast and a spew of cringe-inducing English dialogue (mostly about turkey) that recalls Chen’s tough to sit through Killing me Softly – whereas Wolf Warrior and its sequel were at least funny, benefiting from an entertainingly gonzo Rambo-esque sense of mildly offensive carnage, The Battle at Lake Changjin just feels embarrassing to watch, and seems to be pushing the message that war is a glorious thing when you’re on the right side ideologically.

While the extent to which this is an issue will vary for different audiences, The Battle at Lake Changjin also suffers from a disappointing disinterest in the actual history, with there being a number of reported inaccuracies in its portrayal of events during the conflict, in particular regarding the ways in which Koreans are left out of the story despite the action taking place in Korea. Again, though this kind of simplification and bias can be seen in war cinema around the world, here the film is amazingly single-minded in its drive to paint Chinese communism as an all-conquering force of pure, selfless good, so much so that it never even really provides any justification for this and instead just takes it as a given and wallows in clichéd, self-satisfied patriotism. Whatever the viewer’s take on this from an ideological standpoint might be, the result is that the characters all exist solely as mouthpieces for the rhetoric of the script, to the point that the film lacks any real human drama or anything to really invest in. It’s a shame, as this squanders a cast of solid talent, and Jackson Yee, who was fantastic in Better Days, in particular, is wasted, with his role requiring him to act like a ten-year-old for most of the running time, possibly to provide some ill-judged comic relief.

It’s ultimately this lack of any substance, along with its shoddy constriction which sinks The Battle at Lake Changjin rather than its overt nationalism, and it comes across throughout as a bad case of filmmaking by committee. While its massive domestic box office haul certainly shows there’s a huge market for this kind of cinema of extreme patriotism in China, from an international perspective it’s hard not to see the film as a great disappointment, both in terms of wasting the incredible talent behind the camera and in its failure to offer anything of interest on the subject, and for all its sound and fury it never amounts to more than a staggeringly unsubtle three hours of sloganeering.

The Battle at Lake Changjin is in cinemas now.