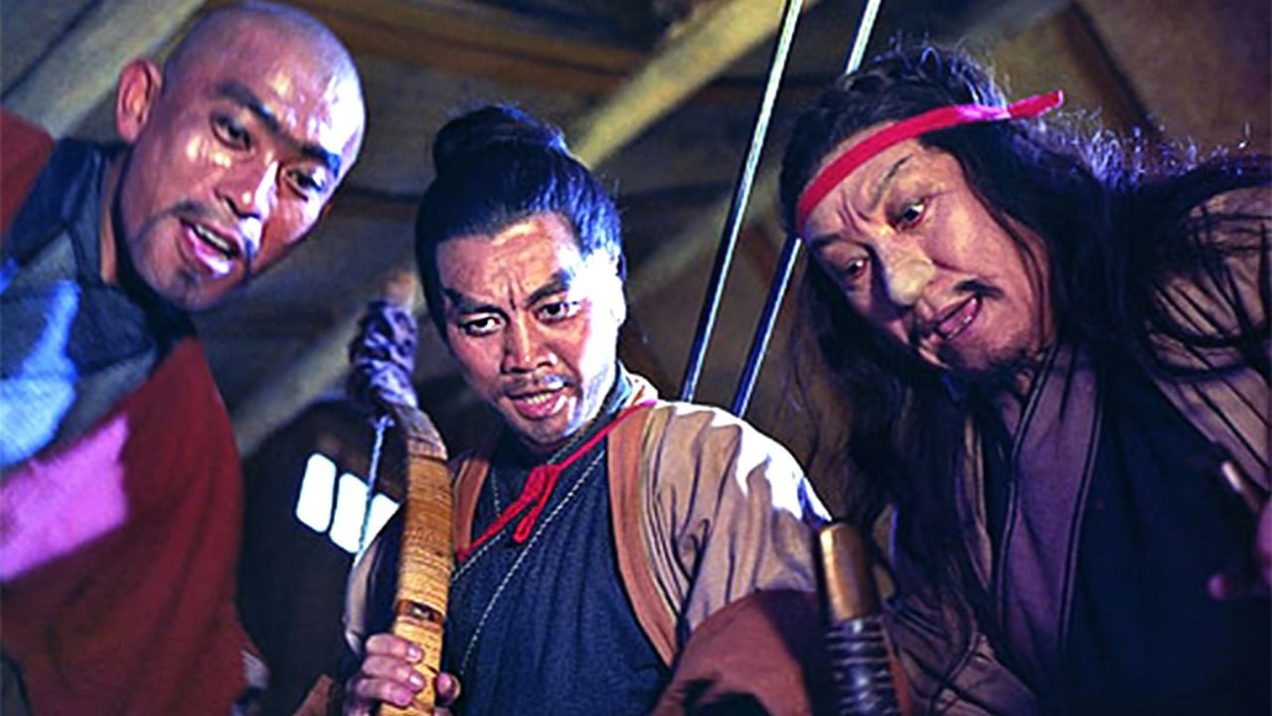 Innocent young farmer Chang Wei Fu (Chang I, The Silent Swordsman, Zatoichi and the One-Armed Swordsman, Lady Whirlwind, The Moon Warriors) returns home after being attacked by a trio of idiosyncratic villains – the longbow-sporting Zuo Jinglong (Lam Kau, Drunken Master, Golden Swallow, As Tears Go By), big-nosed, hair-obsessed swordsman Ying Tien (Tin Sam, Lovers’ Rock, Hong Kong Nocturne, The Monkey Goes West) and (allegedly) 9ft axe-welding Ku Feng (Yang Zhang, The Love Eterne, The Shadow Whip, Return of the One-Armed Swordsman) – only to find his family left for dead and sister kidnapped. With sickening detail, we are exposed to the glee they take in killing defenceless women and children. Taking his mothers bracelet, adorned in small bells as a symbol of his intent, he sets out to take revenge on the criminals, burning his family home to the ground.

Having spent years with a chivalrous sifu (Yeung Chi-Hing, One-Armed Swordsman, The Silent Swordsman, Vengeance!) – shown in a seasonal change of foliage – he emerges travelling villages in search of the three men. Now an elusive, nameless character, his cold reticence echoes Toshiro Mifune in Yojimbo perhaps, but filtered through the Spaghetti Western takes of the mid-60s: Eastwood in A Fistful Of Dollars or Nero in Django. Stepping in to save a maiden whose fate echoes that of his sister, Xiang Xiang (Chin Ping, Vengeance Is a Golden Blade, Killer Darts, Temple of the Red Lotus), he quickly makes an enemy of Tao Gongquan (Lee Wan-Chung, The Blade Spares None, Come Drink with Me, The Knight of Knights) and his nefarious clan.

Chang begins to locate his prey one-by-one, but as his affection for Xiang grows, is he prepared to face the cost of his revenge?

In the wake of the success of One-Armed Swordsman, the Shaw Brothers hit their most creative era, as directors explored different aspects to wuxia genre to find what suited them best. Arguably it was only once Chang Cheh hit his most prolific stride in the 70s that the idea of wuxia and martial art films began to get, for want of a better expression, derivative.

At this point, director Yueh Feng, born in Shanghai in 1910, hit his most copious period working for Shaw Brothers after over 30 years of experience. He had followed Li Han Hsiang into Huangmeixi opera with the musical fantasies Madam White Snake (based on the same source material that Tsui Hark would turn into Green Snake) and The Lotus Lamp. Films like The Dragon Creek showed affection for the classic Western movies of the 40s and 50s, and indeed when Chang catches up to the fate of his sister, there’s more than a hint of The Searchers.

But here, just a year after The Dragon Creek was released, we see an acquaintance with the far more violent and brutal Spaghetti Western. The character of Chang follows a growing trope in Italian Westerns for tragic heroes, typified by Franco Nero in Django, Death Rides A Horse, and the hundreds of copycats that followed. With one eye on the Spaghetti Westerns and the other on the most sensational Japanese Samurai films, Feng doesn’t hold back on the violence, taking the usual gushing bright reds of Shaw Brothers bloodshed to new levels. There are severed limbs and even heads everywhere, peppered with arrows through heads and an impaling on bamboo.

But perhaps too much credit can be laid at Feng’s feet. The Bells Of Death marks the debut of writer Yau-Daai On-Ping (also known as Chiu Kang-Chien, Tai An-Ping Chiu), a young man who would go on to write some of the most iconic and intelligent Hong Kong Films right into the 80s and 90s. Early contributions include The Singing Killer, The Duel, Intimate Confessions of a Chinese Courtesan, and the overlooked Shaw Brothers gritty thriller Payment in Blood, while later he would work on Boat People, Dream Lovers, Rouge, Centre Stage and The Banquet. The script is littered with witty, knowing dialogue, showing both a familiarity with wuxia conventions, and intent to subvert and play with them. Caught in a rain shower, Ying Tien states it makes it ‘inconvenient to kill’, when he obviously has a problem getting his (long) hair wet. When Chang hears one of his quarries will break out his men from a prison, he deliberately assaults and kills several of his men to place himself behind bars too. ‘What were you thinking killing in the daytime,’ a local marshal bellows at him.

The Bells Of Death may well have pushed Feng’s fellow directors like Chang Cheh to find more extreme characters and traits, which informed Chang’s Return Of The One-Armed Swordsman and, in turn, later entries to the wuxia and kung fu genre, but rarely are such characters brought to life so vividly, again echoing the quirkiness of Spaghetti Westerns. The coffin maker becomes a central figure in such westerns, and the Clint Eastwood films that followed in the 70s, yet here it is Ying Tien himself shown diligently making the coffins for those he has killed. These more extreme characters fall back into Japanese cinema, with examples such as Lady Snowblood – where we find Meiko Kaji as the lead similarly tracking down the assailants one by one – and out again, eventually lapped up by Tarantino.

The use of hand-to-hand combat begins to be come more present, particularly in supernatural or even super powered ways, later explored more visually by Chang-hwa Jeong on King Boxer. In one scene, Chang uses a special palm technique to gather leaves from a tree and forcibly aim them at opponents, leaving them to unpleasantly remove them from their faces like scabs.

Even against the usual quality of Shaw Brothers productions, the film is particularly well shot by cinematographer Pao Hsueh-Li, who would later become a director himself, supporting several of Chang Cheh’s 70s epics before taking the lead on films like The Shadow Boxer. Views are imaginatively angled, filtered through trees and branches, the camera catching the glare from sunlight or framing the action. Wistful cutaways to flowers in bloom show the passing of time.

The confrontations with the rogues are elegantly shot; from the encounter in a misty bamboo forest, Chang’s spur like bells creating a percussive backdrop to a suspenseful soundtrack by Shaw Brothers main composer Wang Foo Ling (often credited Wang Fu Ling); to Chang’s duel with Ying in a temple he decides to use candles to prove superiority, where whoever’s goes out first must let the other kill him, the flickering light illuminating the spirit tablets. If the last confrontation with the longbow could be staid, Feng and Pao make use of a handheld camera to add immediacy and tension to Chang’s confrontation with Zuo’s men.

Chang I impresses in the central role as a naïve young man who learns the ways and cold stance of the swordsman (unseen on screen), obsessed with vengeance, until his affection for Xiang brings him back to humanity. ‘Where are we going?’ Xiang asks plaintively, after the repercussions of Chang’s revenge have been most severely felt. The consequences of Chang’s actions are rarely far below the surface, even his victories seem tinged with sadness; in one scene watching his foe aimless spin round in pain in slow motion. There’s little, if any, glory here.

Ultimately, in a typically rushed ending, we find Chang (massive spoiler) ready to start his life anew. Moving swiftly from one location and scenario to another throughout its tight 84 minute running time, this works both in terms of thrilling action and characterisation. Though stretched, the narrative avoids feeling forced.

Once again, this is another unsung classic from the Shaw Brothers repertoire that deserves a much wider audience. And one that has stood the test of time particularly well.

The Bells Of Death is available on HK and US DVD.

Usual high quality video from Celestial Pictures with a solid soundtrack to boot does the film justice. Extras are the usual fairly minimal type found on lesser known films, with little of interest to be found in film stills, biographies and ‘production notes’.

Distractingly, the cover blurb for the DVD highlights Wu Ma. Odd, considering his is only a minor role (and he had minor roles in so many other Shaw Brothers films) when there’s so much more to talk about.