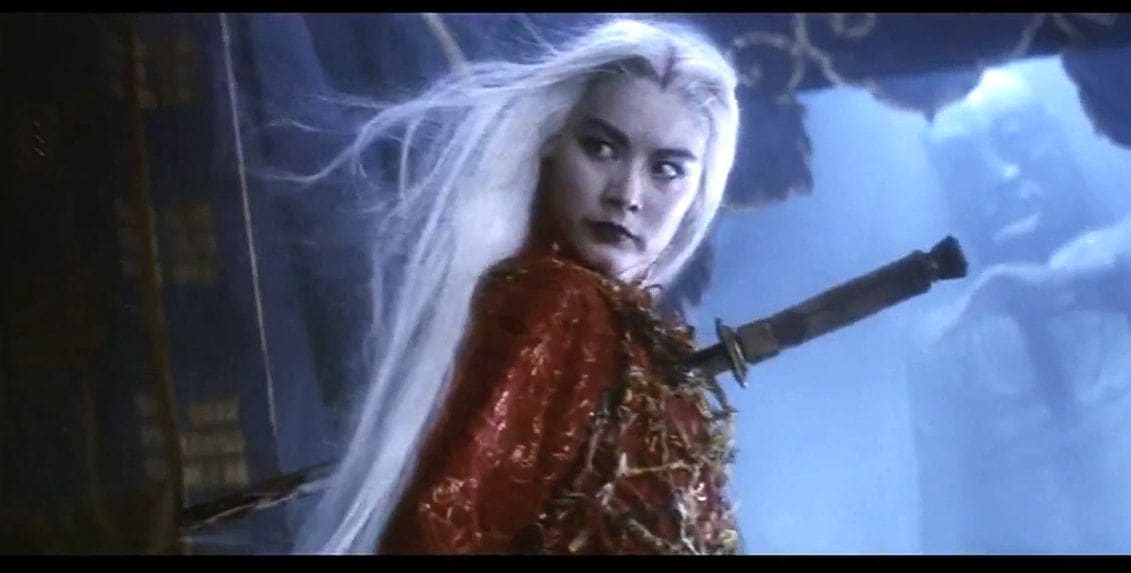 A watershed 90s Hong Kong movie, one of the most visually striking of its kind…

The last time I watched The Bride With White Hair before revisiting the film for this review was sometime in the early Noughties, on a tattered VHS. At that time I watched it quite a few times, and was knocked out by the pure visceral aesthetic beauty on show. With a more considered eye now, the film certainly still retains its power, with a small dose of Hong Kong cheese. As a showcase for the androgynous sexiness and intensity of Brigitte Lin, Leslie Cheung’s timeless good looks and broody screen presence, plus the apotheosis of director Ronny Yu’s surrealistic fantasy Wuxia vision, the film succeeds.

In the darkness of the Ching Dysnasty, the Wu Tang Clan battle an Evil Cult. The Clans successor Cho Yi Hang (Leslie Cheung, A Better Tomorrow) is tired and brooding, that is until he meets The Cults best Warrior, Lien Ni Chang (Brigitte Lin, Swordsman 2) and the two fall in love. Their illicit love affair angers the Cults leader, Siamese Twins Chi Wu Shuang (Francis Ng, Infernal Affairs 2, and Elaine Lui, Angels) and the stage is set for an ultimate battle.

The all-encompassing fantastical world created is something to behold; in its own way as powerful as Ching Siu-tung’s A Chinese Ghost Story, perhaps, alongside Yuen Kwai and David Lai’s Saviour Of the Soul, the only film you can compare it to. I would love to see a HD transfer, as the construction of this in every aspect is so beautiful, and doesn’t let up for one frame. Deep blue lighting, blur-fu (both staples of 90s Wuxia flicks, the latter in which the action looks like stop-motion animation due to a film process called step-printing), flowing camerawork, and some of the best costume and set design you’re likely to see in a Hong Kong movie combine to immerse the viewer in a cocoon of melancholy, punctuated by moments of visual excitement.

The action choreography, by none other than Phillip Kwok (Hard Boiled), is typical for the time and style, when there was a want for experimentation with the visual approach, as evidenced by Wong Kar-wai’s classic Ashes Of Time. Gone is the clear presentation of the 80’s and 90’s, even the quick cut wire-fu of the 90’s, here we have expressionistic impressions of combat, with a reliance on inventive shots and unusual weapons. Lin’s use of her (white) hair to trap opponents is the icing on the cake. However, I would make the criticism that a lot of the wide shots in the action scenes are a little bit lacking in bite and conviction, which is a shame because their presentation is so great in terms of film-making.

The chemistry and depth of performance put in by the two leads, and the purity of their love reflected in the aesthetic (the two make love and fall in love in a cave pouring with water, replete with slow-motion shots and cheesy Hong Kong movie music) makes the film one of the most romantic of its kind. While the aforementioned cheese does play a part, there is enough sincere emotion and fatal romanticism on display to awaken the heart of even the most jaded Wuxia action junkie.

It’s a toss-up for me between the film and Swordsman 2 as to which best represents Brigitte Lin’s androgyny, but there’s no arguing which is the better film overall; Bride easily wins out due to its far-reaching influence (There’s an argument it influenced Tarantino’s Kill Bill, with both protagonists named The Bride) and originality. The film also sports one of the most memorable villains in all of Hong Kong cinema, with Francis Ng and Elaine Lui’s absolutely insane Siamese twins. From the first reveal of their condition to a gory demise, not a frame is wasted in depicting their creeping evil and over-the-top performances. Hell, the voice distortion of Ng even sounds like one of the flesh-eating spirits from the classic Evil Dead.

While very much of its time, especially reflected in the cheesy soundtrack and some aspects of visual style, The Bride With White Hair is so constantly engaging visually with such committed performances that it is one of the touchstone Hong Kong pictures of the ’90s. Yu’s direction and the team he assembled create a world so fully formed that you can’t help but sit back and escape into it. Now we really need a decent Blu-ray release.