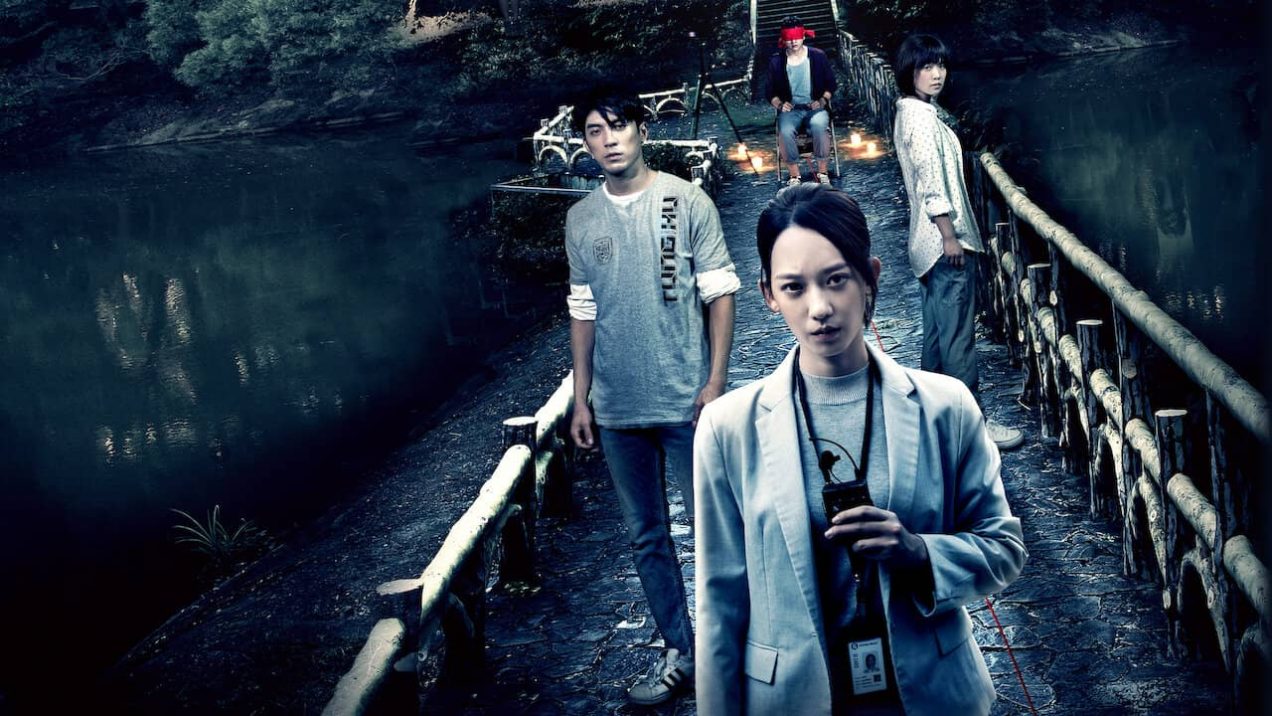 From the writers and producers of the hit Taiwan horror series The Tag-Along comes another slice of suspiciously familiar ghost fun in the form of The Bridge Curse, revolving around an unfortunate group of students cursed by the usual vengeful spirit after failing to respect a local urban legend. Directed by Lester Hsi, the film was actually based on a real-life incident at Tunghai University in Taiwan, in which a student apparently live-streamed himself on Facebook exploring the haunted bridge of the title, only to be warned by his watchers that they could see a ghostly figure in the background. Although the video in question has been deleted, viewers everywhere can now experience the terror for themselves, such as it is, with the film having landed on Netflix.

The film opens with a TV crew making a show about the legend, which tells of a bridge on a closed-off part of a university campus, which is haunted by a female ghost – apparently there are thirteen steps at the end of the bridge, and if a fourteenth step mysteriously materialises, the ghost will appear, with dire results. The crew are following up on a news story in which a group of students used the bridge for a bravery test, only to be found dead later in different parts of the campus, and as their tale plays out in flashback, the dreadful truth is gradually revealed.

This review could basically be a long list of the films which The Bridge Curse might be said to either reference, borrow from or rip-off, depending on how charitable the viewer feels, though suffice to say that Ring, Dark Water, Ju-on: The Grudge, Whispering Corridors, and basically every other Asian ghost horror of the last few decades gets a nod, with some found footage shenanigans thrown in for good measure. Predictable to a frame, the film is packed with stupid horror movie behaviour, with the ghost relying on the characters to wandering off by themselves in the abandoned dorm they’re staying in (usually to the bathroom), and combined with the amusingly generic hokiness of the plot, this gives it the feel of a lesser episode of Scooby Doo. Matters aren’t made any easier to take seriously by some pretty terrible acting, and though the cast are vaguely likeable, they never manage to make any of the boneheaded characters believable – to be fair, it should be noted that  Zhan Wan-ru was nominated for Best Supporting Actress at the Taipei Film Awards, though it’s unclear why.

How much of a problem all this is will be down to the individual viewer, and all this aside, The Bridge Curse is a pretty entertaining hour and twenty-seven minutes for anyone pining for the heyday of Asian long-haired female ghost urban legend curse films. Lester Hsi does a perfectly respectable job as director, keeping things moving along at a brisk pace, and though the film rarely even approaches being frightening, the ghost herself is reasonable value for money, the effects are decent, and the general look and locations are atmospheric and creepy enough. To their credit, writers Chang Keng-ming, and Hao Po-Hsiang do throw in some pointless but entertaining timeline chicanery, along with a final twist, which unsurprisingly works mainly to leave things open for a sequel, though which at least lets the film end on a slightly different note to most of its peers.

Whilst in good conscience it’d be hard to actually recommend The Bridge Curse to discerning genre fans, and despite the absolute dearth of originality on show, it’s nevertheless an efficient, harmless piece of supernatural fun. The fact of it being on Netflix means that it should reach, if not necessarily impress, a wider audience, and anyone looking for an old fashioned Asian ghost flick could probably do worse.

The Bridge Curse is available to stream now on Netflix.