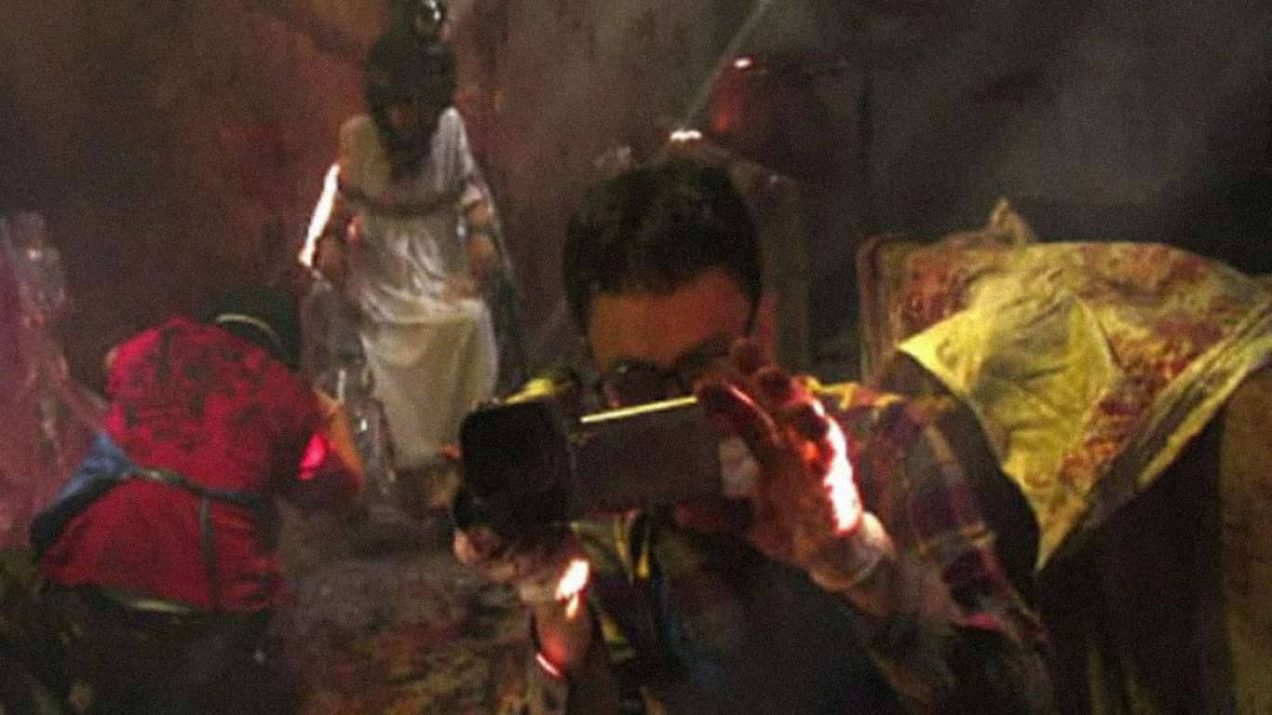 An unfortunate couple are kidnapped and forced to star in a snuff film, being tortured by a pig mask-wearing maniac…

While South Korea has a very strong indie scene, there don’t tend to be many independent genre films from the country, especially when it comes to horror. Although this in itself is enough to make Kim Jin-won’s 2007 USD$50k budgeted debut The Butcher of interest, the film stands as one of the most extreme of the last couple of decades, not only from Korea, or even Asia, but from anywhere, a found footage style fake snuff production that puts the viewer right in the shoes of the unfortunate victims, with truly nauseating results.

The plot is exactly as you’d expect – four victims are snatched by a director called Mr. Kim, his assistant and a hulking maniac wearing a pig mask and a butcher’s apron, and are dragged off to a filthy rural slaughterhouse where they have cameras attached to them as part of a snuff movie production. The first two victims are hauled off, leaving behind a husband and wife couple to hear their screams, making it only too clear what will soon be happening to them. Their turn comes, and they are tied to chairs facing each other, the husband being told by the director that if he can survive ten minutes of torture then then the two of them will be let go – unsurprisingly, this is just the beginning of their hellish experience.

Watching The Butcher is an intense, distressing experience, thanks largely to Kim Jin-won’s skilful use of the found footage form. As well as neatly side-stepping the question as to why the characters don’t stop filming when they find themselves in peril, the premise of having the cameras strapped to them against their will makes the film horribly immersive, and even when the perspective switches to Mr. Kim’s camcorder this never feels artificial or jarring thanks to some clever editing. For better or worse, the viewer really does feel transported to the abattoir, and the trailer’s line ‘You’re just cast snuff film’ is a pretty fair description of what Kim has achieved.

Of course, whether or not the viewer actually wants to feel like they’re taking part in a snuff film is another question, and The Butcher is absolutely only a film for those with the strongest of stomachs, and who can stand its constant assault on the senses. Kim packs in an incredible amount of sadism, violence and torture, and the film is relentless in its non-stop carnage, with the atrocities involving knives, chainsaws and more, and including brutal sexual assault and some horrific eyeball abuse – the film rivals, and possibly even surpasses Kōji Shiraishi’s 2009 extreme classic Grotesque in terms of viciousness. The effects are incredibly impressive considering the tiny $50k budget, and the found footage technique again really helps, allowing the camera to leave certain things to remain half or briefly seen in a way which gives them even more impact, boosted by some very effective sound design.

At the same time, The Butcher has somewhat of a satirical feel, and there’s a temptation to read it as a particularly angry rant against the Korean film industry, with the snuff film director Kim clearly being self-referential and prone to rants about his filmmaking process and creativity. Though populated entirely by unpleasant, barbaric characters, even the victims being selfish and shallow, and marked by a general air of nihilistic hopelessness, the film does have a very, very dark streak of humour throughout, and while it would be a stretch to actually call it funny, some scenes do verge on the absurd, such as when Kim pauses the torture to take a phone call to discuss going to church with someone who is presumably his wife.

These very brief moments of occasional respite aside, The Butcher an incredibly visceral experience, and is the closest the viewer can get to actually feeling tortured. Needless to say, this can be taken either as a warning or a recommendation, though fans of extreme cinema certainly won’t feel short changed if they manage to track it down. The film has all the more of a gut punch thanks to the fact that Kim Jin-won is clearly a very talented and creative director, and it’s a real shame that it took him another twelve years to produce his sophomore effort, the 2019 horror Warning: Do Not Play, which, perhaps unsurprisingly, is a considerably less vile and shocking affair.