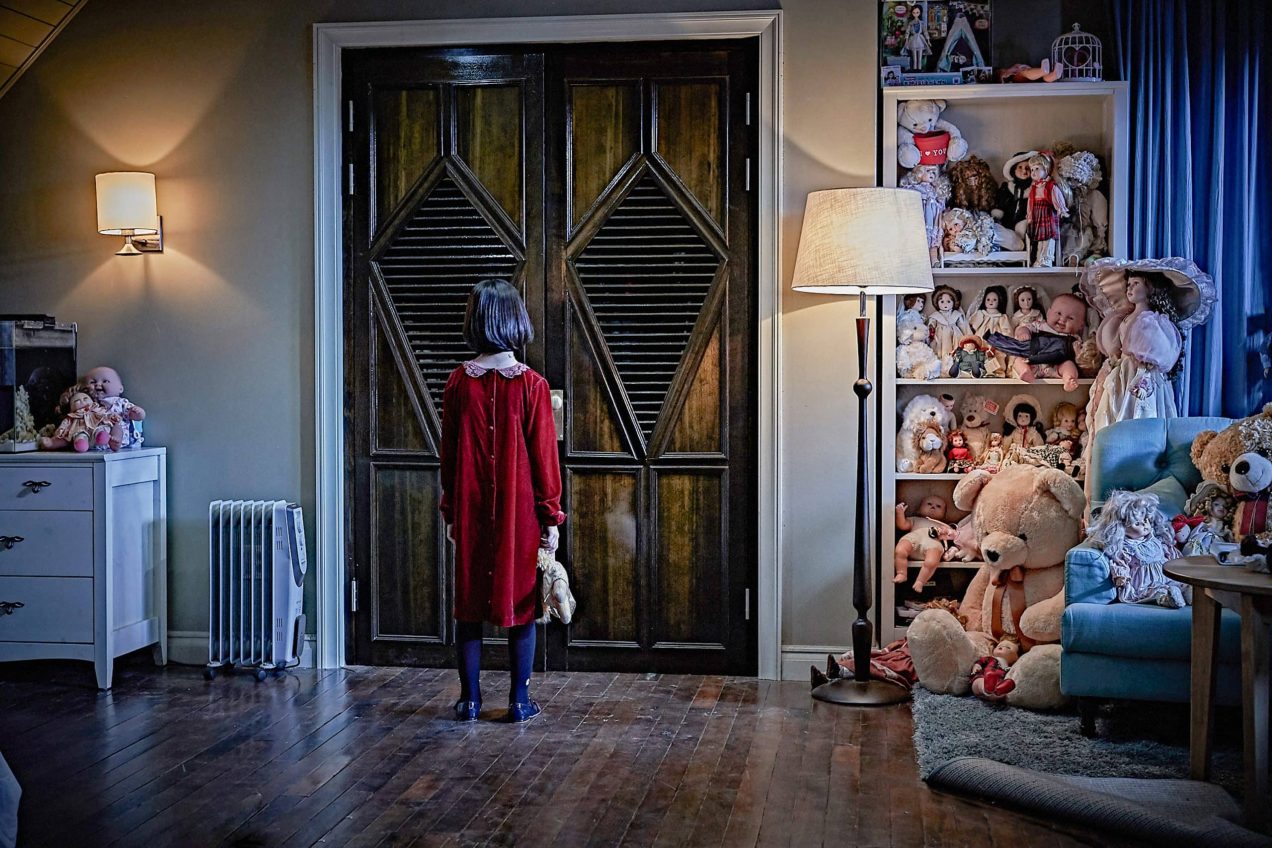 Sprinting zombies aside, 2020 has been a bit of a lean year for Korean horror, and so it’s hard for genre fans not to approach debut writer-director Kim Kwang-bin’s The Closet with at least a touch of hopeful enthusiasm, despite its rather familiar-sounding title. The film’s prospects were also boosted by the presence of Ha Jung-woo, one of Korea’s most popular and acclaimed actors, fantastic in The Chaser and The Yellow Sea, and recently in blockbusters including Ashfall and the Along with the Gods series, and it did well at the domestic box office, opening in the top spot, as well as having a limited international release.

Ha Jung-woo plays Sang-won, who after the tragic death of his wife in a car accident moves to a new house to try and reconnect with his young daughter Yi-na (Heo Yool). Attempting to balance his grieving with his career as an architect, Sang-won finds it hard to make time for Yi-na, and so he’s not particularly worried when she starts talking to an imaginary friend. Unfortunately, the friend turns out to be a malevolent spirit in her closet, and when she disappears he finds himself at a loss and being blamed by the authorities. Kyung-hoon (Kim Nam-gil), a strange man calling himself an exorcist shows up and claims to be able to help Sang-won, seeming to have knowledge of the closet and the evil lurking within.

As a horror film, The Closet is firmly in the same camp as the likes of The Mimic and Svaha: The Sixth Finger, dealing with spirits, shamanism and exorcism rather than revenge, with touches of the classic A Tale of Two Sisters and the western Insidious franchise, rather than the vengeful cupboard skulking ghost that might be suggested by the title. As a first-time writer-director, Kim Kwang-bin shows real genre skill, and the film packs a great deal of supernatural action into its sensibly short running time, and with the script being efficiently structured as it builds to an enjoyably tense and fantastical finish. Without spoiling the direction the film goes in, its ghosts are surprisingly threatening and vicious, and Kim does a great job of balancing an ominous, brooding atmosphere with well-handled jumps – though the frights are nothing new, they mostly hit home, thanks in part to some decent, sparingly used special effects.

What really makes The Closet stand out though is the human story at its core, with its horror elements basically acting as a framework for a dark psychological drama focusing on a damaged father daughter relationship. Though this might not sound too promising for genre fans, Kim expertly combines these different aspects of the film, and it’s one of the few from Korea which manages to use its melodrama well, mainly since its domestic themes are apparent from early on and effectively drive the narrative, rather than being hurriedly thrown in for a forced teary finale. Once all the cards are on the table, the horror takes on a melancholic, sad feel, though never in a way which undermines the film’s constant sense of dread or its scares, and the final scenes really do work the heartstrings as well as the nerves.

It helps that Ha Jung-woo is excellent in the lead role, adding star power as well as making Sang-won a painfully relatable figure, and the middle section of the film where he desperately tries to make sense of Yi-na’s disappearance, still tormented by his wife’s death, is as gripping as any of the ghostly goings-on. Kim Nam-gil is similarly great as the ambiguous Kyung-hoon, and the dynamic between the two really clicks as the film goes on and this also raises the film a few notches, as well as heightening the sense of danger during the later stages.

It’s rare to find a horror film that’s both frightening and genuinely moving, though The Closet pulls this off with admirable confidence, and is all the more effective for its emotional depth. Kim Kwang-bin impresses with his debut feature, and it’s great to end 2020 with a Korean genre production of this quality.

The Closet is available on US DVD from Dark Sky Films.