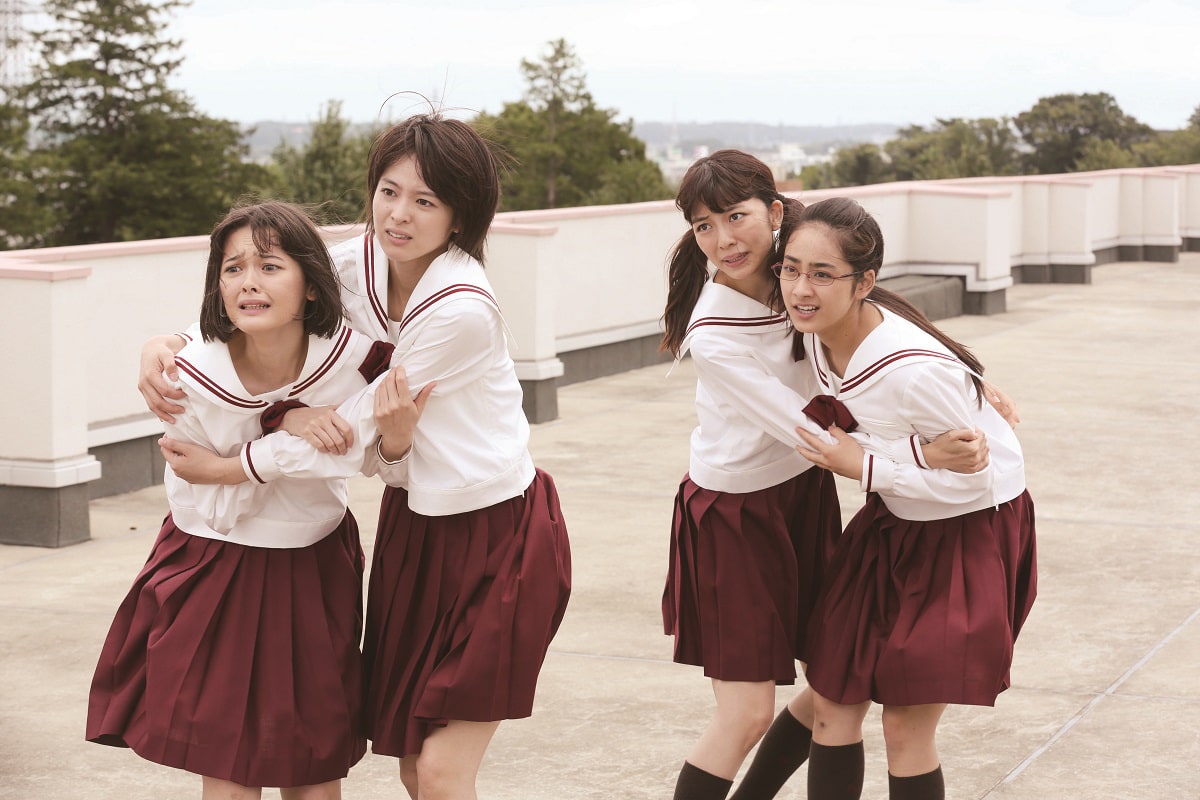 A group of highschool girls gather for a literary club meeting, each telling very different stories about the recent death of a classmate…

A group of highschool girls each spin their own tale following the death, or perhaps the murder, of their classmate in The Dark Maidens, an ornate and intricate mystery yarn adapted from the novel Ankoku Joshi by Rikako Akiyoshi. Directed by Saiji Yakumo (My Pretend Girlfriend) and written by noted anime scripter Mari Okada (The Anthem of the Heart), the film is a cheerfully morbid affair, with plenty of twists and shock revelations in an expected manner.

The film opens in classic mystery style, with the member of the elite literary club at an all-girls school being summoned by their leader Sayuri (Fumika Shimizu, Tokyo Ghoul) to attend a meeting in their grandiose sanctuary. The group, comprising the flirtatious Shiyo (Nana Seino, Too Young to Die!), baking expert Akane (Riria Kojima, The Werewolf Game: Prison Break), the half-Bulgarian Diana (Tina Tamashiro, Sadako vs. Kayako) and quiet newcomer Mirei (Yuna Taira, Mumon: The Land of Stealth) each present a story relating to the death of former club leader Itsumi (Marie Iitoyo, Closest Love to Heaven), who fell from the school rooftop in unexplained circumstances. With their tales each offering a very different version of events leading up to Itsumi’s death, in particular with regards to their own roles in what Sayuri claims to have been her murder.

Although its setup is nothing new, The Dark Maidens certainly can’t be faulted for lack of effort when it comes to bamboozling the viewer, Saiji Yakumo spending pretty much the entire running time setting up and dashing expectations and throwing in all manner of ambiguous story beats. It’s clear from early on that none of the girls or their accounts are trustworthy, each setting themselves up as an angelic heroine and as the best friend (or possibly more) of Itsumi, while pointing the finger at another of the group. This works well enough, initially at least, and there’s amusement to be had in the ways in which the girls’ roles shift wildly as the tales develop, Yakumo managing an enjoyable balance between keeping things bright and breezy while holding the interest as it builds towards its final denouement.

Unfortunately, by the time a couple of the girls have had their say, it becomes obvious that none of their stories are likely to contain either much truth or many clues, and that the viewer is simply being manipulated and asked to go along for the ride – something which makes the film as a whole rather predictable, and which some will be more forgiving of than others. By the time the final act arrives, itself complete with a series of reversals, it’s hard not to feel both cheated and detached, and though The Dark Maidens remains entertaining enough, as a mystery it never really truly grips.

This is also partly down to Yakumo’s direction and the film’s overall look, which gives it very much the feel of a frivolous manga or anime adaption, with an at times jarring mix of playful cuteness and darker and more grounded elements, lacking the kind of satirical or surreal edge that might have given it more bite. With the members of the club all being flimsy stereotypes whose dress-sense and behaviour verges on schoolgirl fantasy-fulfilment, there’s no real weight to the film, and while the acting is generally fine, it’s hard to feel any kind of investment in the fates of any of them.

To be fair, Yakumo clearly isn’t aiming for anything too deep or meaningful, and The Dark Maidens never takes itself too seriously, being content to operate as a rococo puzzle box. In this modest ambition the film generally succeeds, and though its clumsy narrative shenanigans will make it a little too hard to swallow for some viewers, it’s, for the most part, a painless enough piece of fun.

The Dark Maidens screens as part of the Japan Foundation Touring Film Programme 2018, which takes place from February 2 to March 28.