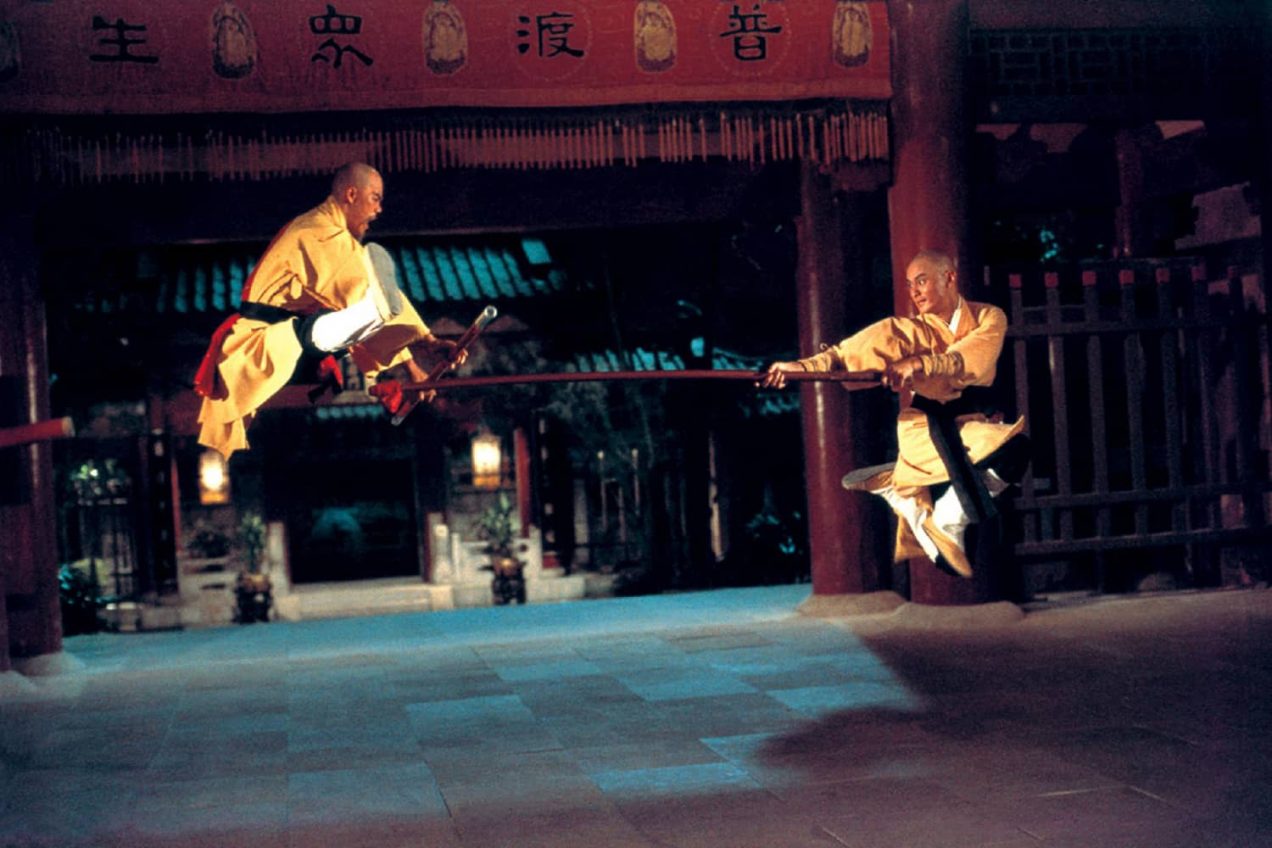 The swansong of Shaw Brothers is a true martial arts masterpiece…

A few years ago I had a DVD copy of The Eight Diagram Pole Fighter and I was wondering whether to put it on or not, having less experience with Shaw Brothers’ titles (I watched few of them, the highlight being Five Superfighters) than other companies in the genre, Golden Harvest in particular. Eventually, I started watching it, however after 15 minutes into the film I’ve found myself not much invested in the story and the characters, therefore I’ve decided to put it at rest until a better moment.

Which arrived with good timing, when 88 Films released the title crafted from HD source, with improved visuals and original audio, so I said to myself that now the time is suitable to watch it again. I was getting tired by the glossy and too clean movies from the genre recently, I needed to see some raw martial arts and a simple story and this is exactly what I’ve got. The premise is easy to follow as a retelling of the Yang family fate where all the 7 brothers and their father are being framed as traitors to the Middle Kingdom and during an ambush, created by the evil Mongols and Chinese general, only two of them survived.

The Fifth brother (played by Gordon Liu) goes into hiding and becomes monk on Wutai mountain, where he masters the way of the pole and creates his own style, The Sixth Brother (played by Alexander Fu Sheng) flees the battlefield after seen so much pain, loses his mind and remains in such state until the end of the movie. Tragically the actor died during filming thus it is understandable his limited screen presence, while the main character becomes The Fifth Brother and he is the one to execute revenge on the traitors and barbarians ravaging his land. Patriotism is on a high note there, but also heroic deeds and calmness of the mind, attained by purification of the soul as the monks from the mountain are yet to teach Gordon Liu’s character.

The story of the Yang family I saw a few years ago under the title Saving General Yang, retold with flashy scenes and too clean aesthetics, but it gave me a foundation for comparison, and I must say that the similarities are in the story only. The path of The Fifth Brother to enlightenment and purification brought back the memories of Andy Lau’s character in Shaolin, where he had a similar transformation. I can see now where the inspiration for the above two movies came from and I was delighted to see this classic tale in its raw glory.

With all its simplicity the story and the development of the main characters gave me some food for thought, is the way of revenge is always the right one, or is the loyalty has to be ever questioned, or even can we become better people following the peaceful doctrines of the Buddhist teachings and could we elevate our minds above the material world. It was like a revelation to me, if such plain movie from the martial arts genre could evoke such thoughts then it must be good not only on a fighting level, but as a philosophical display of ancient China and its then high moral values.

And I didn’t have to wait long for the fighting to erupt on screen and I wasn’t disappointed one bit, well crafted, extremely well performed and so synchronized that I was amazed by the impeccable fist and poles exchange between the participants in each scene. The training as well was so well executed, but I suppose that with a director such as Lau Kar-Leung one can expect quality in the fighting department as he has a proven record of brilliantly choreographed martial arts scenes in most of his films, whether in front or behind the camera.

His adopted brother is no stranger to fine on-screen fighting, so he delivers in spades when comes to hand to hand combat or using his Yang family spearhead trademarks against any adversary. Too bad Alexander Fu Sheng’s untimely death prevents the audience to witness his skills as he sure has untapped potential as seen in the movie’s opening scene. I just wished that the movie itself was bit longer as it felt rushed, especially in the training and changing The Fifth Brother as a person, from violent warrior to humble servant of the world, seeking peace rather than war.

Although at the time of release Shaw Brothers were not as strong and were in decline, this film proved that there is still spirit in their productions, which once dominated the martial arts movies industry and despite the changes in the narrative and fighting scenes in the genre as a whole, The Eight Diagram Pole Fighter is a stellar example of pure love and craftsmanship, released in the same year as Project A, but holds his ground no matter the too-traditional vibe and techniques used as opposed to the stunts and grand scale of things in other productions from the same year.

As any artistic product, this isn’t without any flaws and for me it was the almost theatrical feel on most scenes filmed in a warehouse, production values were not very high as well, probably working with a limited budget, and that confined way of filming put me a bit off from the overall experience. But I’m glad that I was able to see this film again, it was a sweet throwback to the old school age when everything was real, no excessive use of wires, no glossy pop stars trying to be martial artists, no quick cuts, shaky-cam or other silly techniques to distract your eyes during fast-paced scenes and lightning-fast fighting.

It is distilled entertainment the likes of which we sadly see very rarely nowadays, but it is a relief for me that not all is lost in the vast world of martial arts movies.

The Eight Diagram Pole Fighter is available on UK Blu-ray from 88 Films.

The disc comes with original artwork from Kung Fu Bob (which comes as a poster as well inside the case) and audio commentary. Lacking in additional features the film compensates with pristine visuals, courtesy of the new HD master, and original audio in Cantonese (there is an English dub available also). There was not a single artefact in sight, the picture was clean, with enough film grain, wide colour gamut regarding the palette and natural, vibrant picture where every detail was visible and sharp, and it looked like it wasn’t filmed some 37 years ago.

It is great to revisit such old movie with upgraded visuals and original audio, it improves upon the whole viewing experience and in comparison with the video transfer of Snake and Crane Arts of Shaolin, this one excels in every way. Highly recommended for all fans.