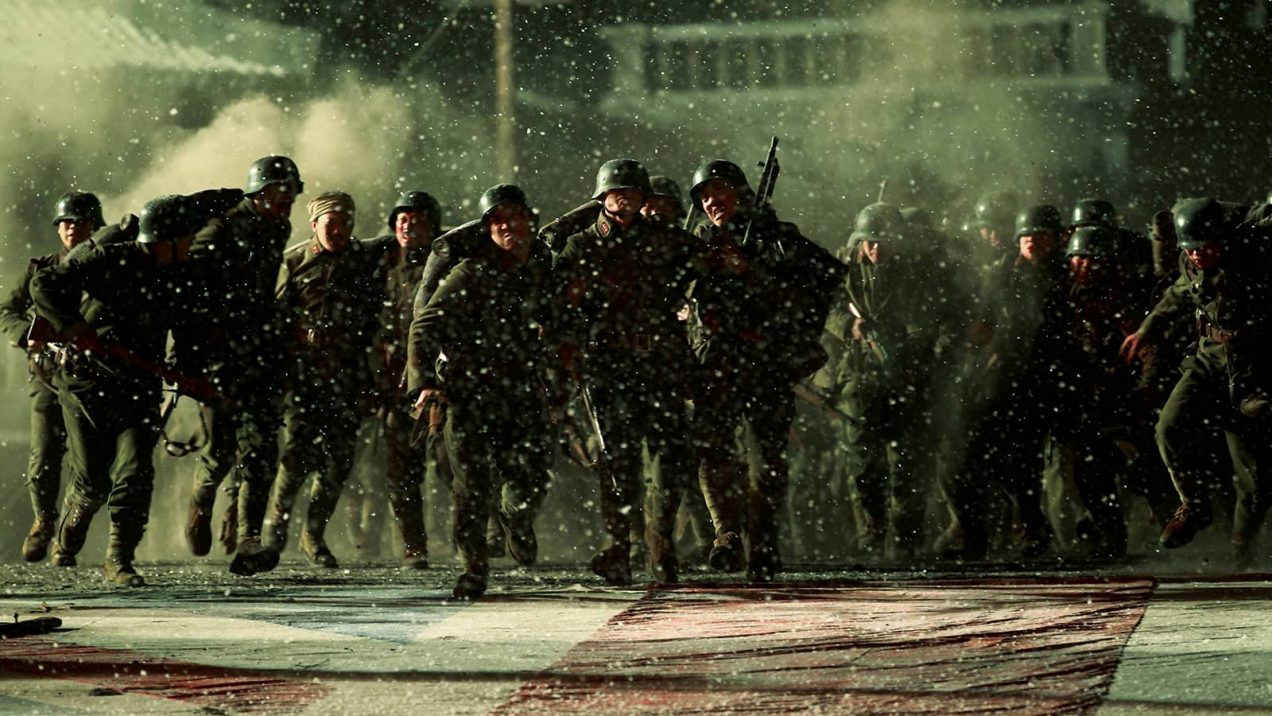 One of the most talked-about Chinese films of last year finally arrives, in a flurry of gunfire and flag-waving…

The Eight Hundred has certainly been one of the most talked-about and controversial Chinese films of the last couple of years, having made headlines when it was pulled from the opening night of the 2019 Shanghai International Film Festival at the last minute. The film’s planned release was similarly cancelled shortly afterwards, and while there was no official explanation given aside from the usual mysterious ‘technical reasons’, it appeared to have upset communist party scholars attached to the country’s censorship body, who felt that it featured too positive a depiction of Kuomintang officers. This came as a shock to many, not least to Huayi Brothers, who had spent more than $80 million on the film, the first from China to be shot entirely on IMAX cameras and featuring lavish special effects and historical sets. Directed by Guan Hu, The Eight Hundred finally made it to cinemas in China recently, apparently shorn of around thirteen minutes, and has performed strongly at the box office, being the first major blockbuster releases following the reopening of cinemas.

The film is set over a period of four days in 1937 during the Battle of Shanghai and the Second Sino-Japanese War, opening with the Chinese army in retreat. In an effort to try and boost national morale and to win support from the international community, Generalissimo Chiang Kai-shek orders a regiment of around 400 men from the National Revolutionary Army to stay behind and defend Sihang Warehouse from the approaching Japanese troops. Already exhausted, wounded and short on supplies, the soldiers try to hold out as long as they can, knowing that they face certain death.

The Eight Hundred is Guan Hu’s eighth film, and was apparently a real passion project that he’d been developing for over a decade. Known for the likes Cow and Mr. Six, Guan generally tends to take a character-focused approach, following protagonists in difficult moral situations, and so it comes as a bit of a surprise that the main weakness of The Eight Hundred is that it features very little of this, being overburdened with a huge cast, none of whom get much in the way of screen time. While there are some potentially interesting figures in the film, it never explores any of their stories beyond broad strokes motivations or clichéd pre-death revelations, and as such it’s hard to feel engaged or gripped by their plight. This undermines any tension the film might have had, and it feels strangely plotless, repetitive and disjointed, something which makes the rather bloated two and a half hour running time feel like a chore.

It’s a shame, as there are signs of something more substantial lurking beneath the surface, chiefly thanks to the proximity of the battle to the international concessions just across the Suzhou River, left alone by the Japanese and where foreigners and more fortunate Chinese civilians look on while going about their lives. Guan also works in what could have been an interesting line in morality, with some of the Chinese soldiers being terrified deserters rather than the usual righteous self-sacrificers. Unfortunately, though, the film never delves into any of this, and instead moves increasingly into flag-waving during its later stages – it’d be interesting to see what had been cut from the film, as what’s left certainly doesn’t feel very different to other patriotic Chinese epics, with plenty of jingoism and the expressing of undying love for the country.

To be fair, The Eight Hundred does impress on a technical level, something which might make it enjoyable enough for audiences mainly looking for spectacle. Although Guan’s at times theatrical style isn’t always a great fit for the large scale set pieces, the film has a number of well-handled battle scenes, all incredibly loud and often quite bloody, the best of which involve aerial attacks by the Japanese. The special effects and sets are all top-notch, and the money spent on the film is clearly up there on screen, and there’s no denying its sense of scale or Guan’s commitment to recreating the chaos and visceral horror of war.

Sadly though, the absence of any well-developed characters, or indeed of any who consistently receive screen time makes The Eight Hundred a hollow experience, something which is all the more frustrating for the fact that there’s clearly what could have been a moving real-life story at its core. Guan Hu is a talented director and storyteller, though here it’s hard not to feel detached and disinterested, and the film doesn’t deliver much more than a long two and a half hours of empty sound and fury.

The Eight Hundred is in UK cinemas now, released by Cine Asia.

2 thoughts on “The Eight Hundred”