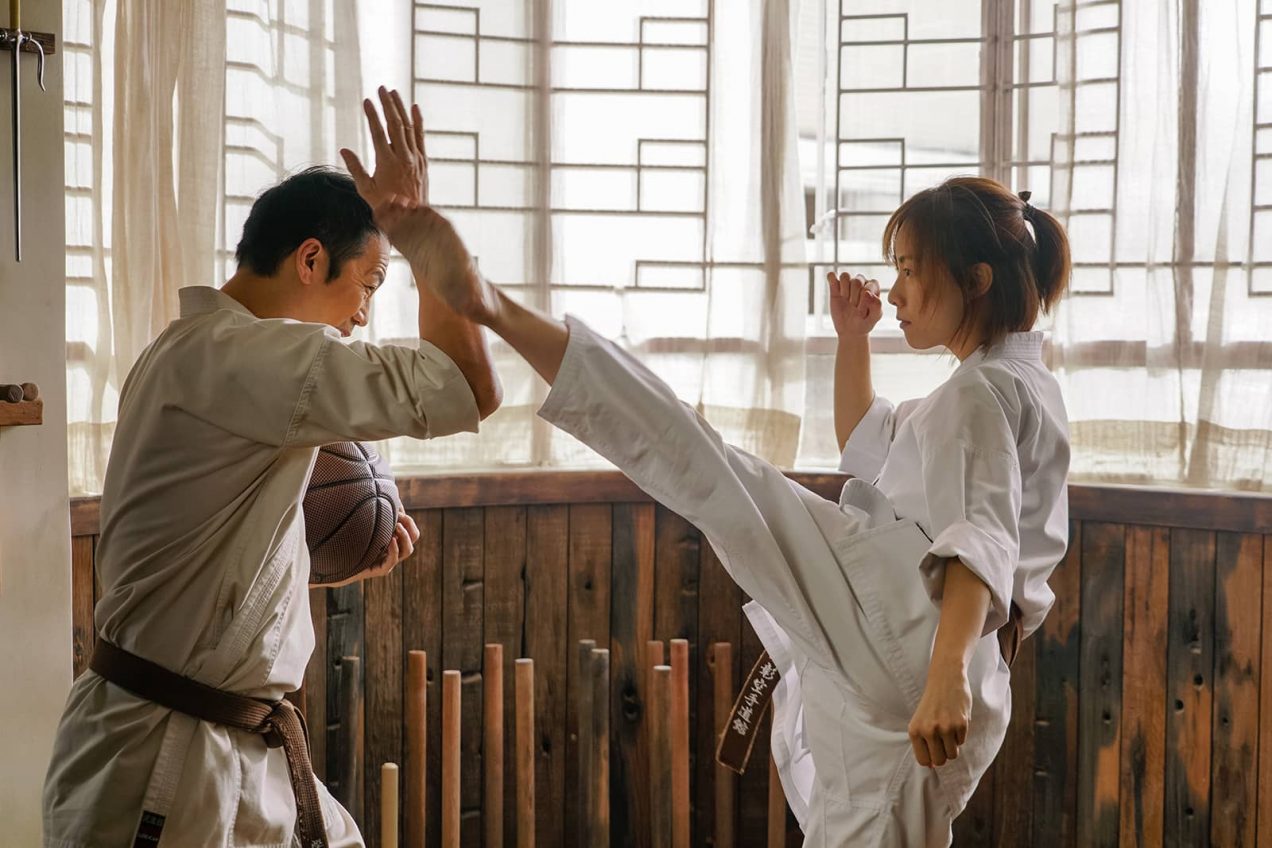 Chapman To follows his 2016 directorial debut, the cookery comedy Let’s Eat with something very different in martial arts drama The Empty Hands. With To directing, producing, starring and co-writing the film with regular Herman Yau collaborator Erica Li, it feels very much like a passion project, and plays out differently to what might at first sound like a fairly basic sports-themed redemption story. The film is headlined by Stephy Tang, taking on a challenging role far removed from the kind of rom-coms the actress is known for, winning a number of nominations and awards for her efforts, including taking Best Actress at the Hong Kong Film Critics Society Awards and receiving her first Hong Kong Film Awards nomination.

Tang plays Mari, a Hong Kong girl with a Japanese father (Kurata Yasuaki, The Brink), a karate instructor who turned their home into a dojo to train his pupils, forcing her to practice as a child. Despite demonstrating great skill and working her way up the belts, Mari quits after being pushed too hard, never seeing eye to eye or being able to communicate with him, growing up to be a directionless and angry young woman wasting her time having an affair with a married DJ and drifting through life. After her father dies, Mari decides to close down the dojo and turn the apartment into flats, though her plans are ruined when it turns out that he has left a controlling 51% share to former pupil Chan Kent (Chapman To), recently released from prison. At odds with Mari over the fate of the dojo, Chan Kent offers her a deal – if she returns to training and can survive three rounds in an upcoming match, he promises to sign his share over to her.

Despite its premise, The Empty Hands is a pretty leftfield film, Chapman To going for an at times odd mix of arthouse and commercial. While the usual sports and personal journey film clichés are present and correct, on paper at least – training montages, childhood flashbacks, personal trauma, climatic match – at the same time they’re for the most part subtly subverted, with genre expectations frequently being turned on their heads and with the plot quietly taking unpredictable turns. Although it at times falls back on crude humour and cute kids, the film remains obtuse and open to interpretation, with a narrative that’s both basic on the surface and has deep emotional and psychological currents for those who look for them. As with any film with this kind of balance, this does inevitably mean that The Empty Hands is possibly neither martial arts enough for genre fans nor intellectual enough for the art crowd, though it works well, and is engaging as well as pleasingly ambitious.

Another thing which is interesting and unexpected about the film is the way its relationships play out, in particular, that between Mari and Chan Kent. While on the one hand their quasi-mentor/pupil dynamic is a traditional one and is compassionate and humanistic, it by no means drives the film or the narrative, and there’s an unbridgeable distance between them, as there is between all the characters – a key theme here is that of isolation and solitude, giving the film an almost meditative air. This proves a smart move on To’s behalf, as it not only focuses the film on the struggles of its individual characters rather than any group-hug melodrama, but allows Stephy Tang to take centre stage, turning in what’s arguably her best career performance to date. Tang is superb as Mari, who makes for a fascinating protagonist, a flawed and by no means likeable young woman, adding real depth and believability to the part. It’s this which really makes the film a gripping watch, Mari’s path not being a simple redemption story, and there being real tension and drama in the way that she continues to make choices which, whether the audience likes them or not, are very much her own.

For only his second film behind the camera To does a surprisingly mature and controlled job as director, and The Empty Hands looks great throughout, with atmospheric visuals and some excellent framing, seeming to have been inspired by Akira Kurosawa in places. To also shows a solid sense of pacing, helped by an economic sub-ninety-minute running time, and this keeps things tight and flowing, the film benefitting from a lack of needless filler material. While there isn’t much in the way of martial arts aside from the training scenes and flashbacks, the inevitable final battle is rousing and nuanced as well as being well-choreographed and brutal, and is certainly worth the wait. The use of karate instead of kung fu is notable, and this ties in nicely with the themes, as well as highlighting the fact that, though this is a film revolving around martial arts, its heart truly lies with personal exploration and struggle.

Although perhaps not a film for mass audiences or for those expecting a traditional martial arts genre film, The Empty Hands is an excellent second directorial outing for Chapman To. The film really belongs to Stephy Tang, whose amazing and wholly convincing performance, along with her equally impressive recent turn in Cheung King-wai’s Somewhere Beyond the Mist, will hopefully see her career advancing to the next level.

The Empty Hands is available from YesAsia.

One thought on “The Empty Hands”