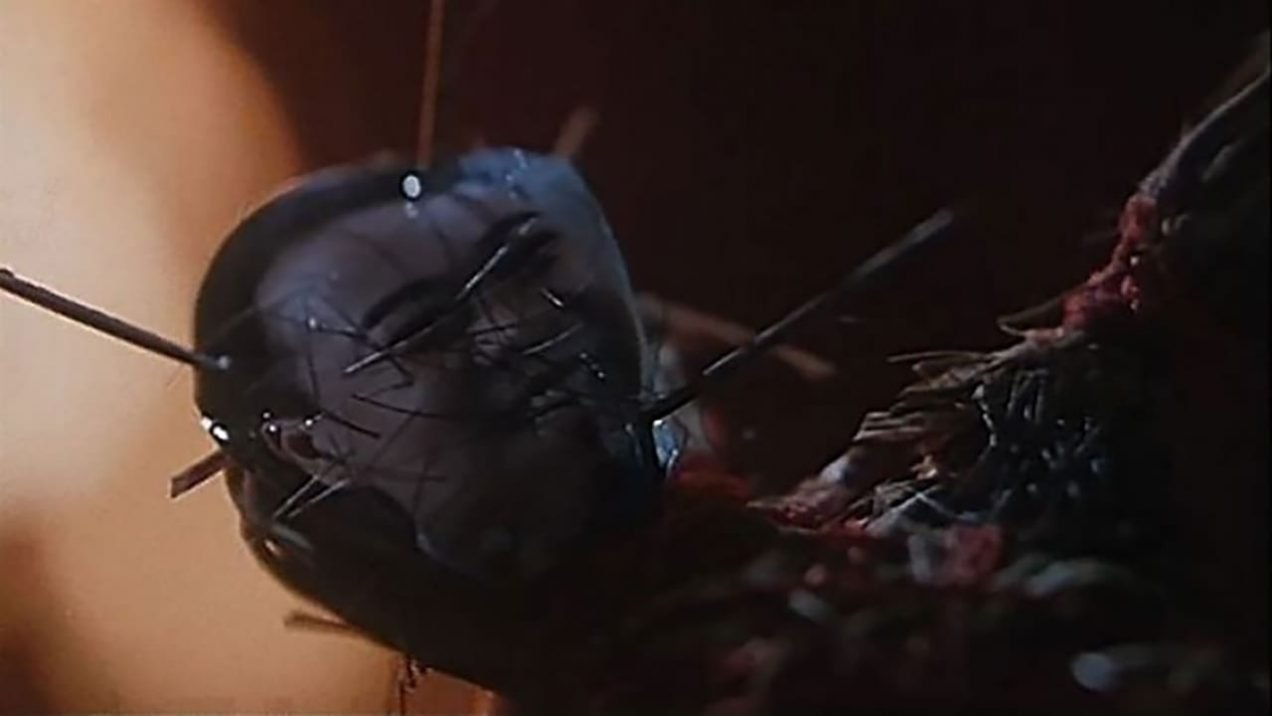 Cat III-rated classic in which a group of sleazy Hong Kongers run afoul of a Thai sorcerer, with spectacularly shocking results…

It’s kind of hard not to love a film with a title as lurid as The Eternal Evil of Asia, which starts off with an unconnected prologue detailing a series of black magic practices that are apparently common on the titular continent even in modern times. The scene ends by helpfully advising the viewer against taking a strange child to the bathroom at the cinema, which I guess is good to know. This crazed beginning, filled with an odd mix of gruesome and ridiculous imagery, sets the film’s stall out nice and early, clearly signalling to us the audience that we are once more lurking around the lunatic fringe of the infamous Category III genre of Hong Kong cinema.

At which point, many viewers will probably head for the door, reach for the remote, or shake their heads and stop reading this review. Which is their loss, really, as The Eternal Evil of Asia is one of the genre’s best, demented and incredibly entertaining, and despite a great deal of gore and dubious sex, is actually quite good humoured and wacky. Is it a good film in the traditional sense? Well, probably not, and fans of highbrow, meaningful, or indeed coherent films will probably choke on their popcorn with disgust or indignation, though it’s a different story entirely if you like your films filled with chaotic bursts of violence, nudity and bizarre sorcery. I do, and I liked this film. Does that make me a bad person?

A group of guys, led by Bon (Kwok-Pong Chan, Final Option) and Kong (Elvis Tsui, one of the most prolific Hong Kong Cat III and sex film actors, notably in Chinese Torture Chamber Story) go to Thailand for a holiday, which apparently is double speak for ‘go looking for hookers’. Apart from Bon, that is, who is happily engaged to Kong’s gorgeous sister May (Ellen Chan, Fatal Love). The guys have a fine old time until, when escaping from a seedy whorehouse, they run into the middle of a battle between some sorcerers. After helping wizard Laimi (Ben Ng, from the infamous Red to Kill), they stay with him for a few days, before causing a tragic sex incident involving his sister. Swearing revenge, Laimi follows the guys back to Hong Kong, where he proceeds to stalk and kill them using a variety of nasty magic tricks. Unfortunately for Bon, Laimi has also taken a liking to May, and plots to make her his own.

The Eternal Evil of Asia was directed by Man Kei Chin (also responsible for the sleazy Naked Poison amongst other things) who wisely employs the tactic of keeping things moving at a hectic pace, ignoring the constraints of coherence and simply throwing in scene after scene of sex, violence and outlandish special effects. Chin actually manages to drum up a reasonable amount of atmosphere, with the early sequences in Thailand quite nicely done, and with Hong Kong being leant an appropriately eerie and seedy look. With these modest aims in mind, the film is several notches above others of its kind, as it is very entertaining and never slows down enough for the viewer to actually dwell upon the illogical trash they are watching.

Really, genre fans have pretty much everything they could ask for, and even the most jaded of Cat III aficionados should have no complaints. This, of course, means that it’s probably not a film for viewers without strong stomachs, flexible sensibilities, or those who don’t find it amusing to see Elvis Tsui having his head transformed into a giant penis. In fact, there is a rich vein of lowbrow humour running through the film, which is a definite plus, as it blunts, to a degree at least, the sadistic, misogynistic edge so common in Category III. It goes without saying that the film is still way in the red zone of immorality, though cheerfully so, and without leaving too much of a bad taste in the mouth – if nothing else, the film probably sets a record for the sheer number of wirework airborne sex scenes featured.

The acting in the film is pretty good for one of its type, and the cast, mainly made up of Hong Kong exploitation veterans, certainly looks like they are having a good time. Their obvious enthusiasm reflects on the film and makes it all the more enjoyable. Ellen Chan probably gives the standout performance, being an unusually strong female character for a Category III film, despite unsurprisingly spending most of the time in states of varying undress.

The bottom line for The Eternal Evil of Asia is that if you’re a fan of Category III films, then this is one of the best. It’s packed with over the top sex and violence and wrapped up nicely in a package of ludicrous mysticism. Even for the vast hordes that look down on Category III films, if you ever feel like giving the genre a chance, this is probably a good place to start.

One thought on “The Eternal Evil of Asia”