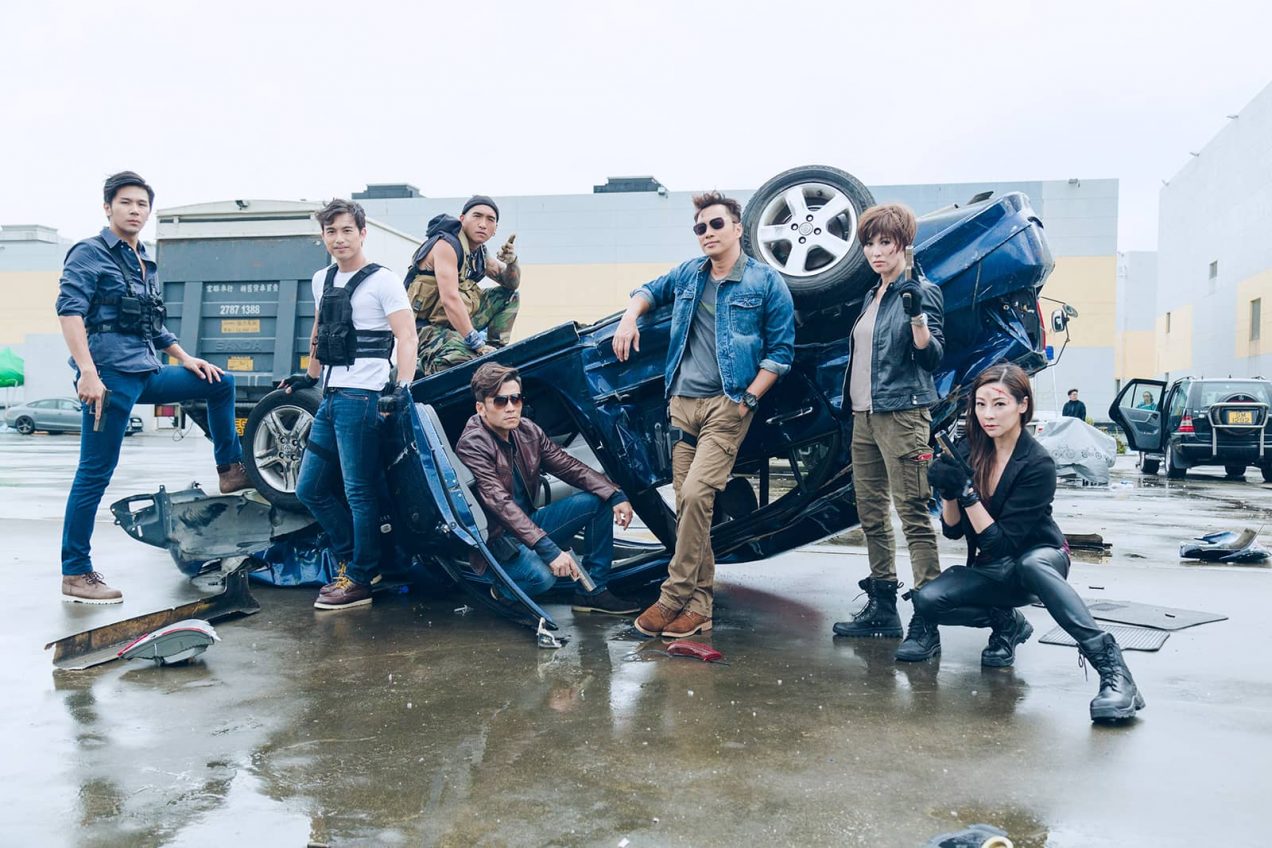 ‘Girls with guns’ are back with Jade Leung at the helm, but this misfire is unlikely to create any new fans…

Originally announced as Special Female Force 2: The Fatal Raid, Jade Leung (Black Cat) returns as Madame Fong along with Jeana Ho (iGirl) and Hidy Yu (Kick Ass Girls) and producer Charlie Wong, but with most other ties to the original film distinctly severed in advertising. An unusual move in Hong Kong cinema, where it’s incredibly common for sequels to have only the most tenuous links to the original. But perhaps that speaks volumes about the dramatic change in tone, becoming a rather solemn and joyless affair, and the shift in narrative focus towards new male lead Patrick Tam (The Attorney).

Madame Wong (Jade Leung) and Inspector Tam (Patrick Tam) are two officers still haunted by a shootout in Macau with gangsters some 20 years before which saw many of their fellow officers killed, and their superiors hushed up the operation’s negligence. Now in charge of an elite force of young female cops charged with bringing down a group of reckless young anarchists across the border in Macau while a major event celebrates the work of the police force, events start to collide that will bring Wong and Tam full circle, with deadly results.

The clunkily-titled The Fatal Raid begins on familiar territory for a ‘girls with guns’ film, with the team undercover (or should that be ‘cover’) in a brothel, predictable scenes of egos brushing up against bosses following procedure. But rather than build up a picture of the team as a whole, these characters are largely jettisoned to focus on Wong and Tam and the events of 20 years ago. Leading to an extended flashback of the Heat-style shootout of the dullest order with Leung wearing a terrible wig that makes her look much older, not 20 years younger. The action as a whole is badly mishandled, favouring at the best the John Wick ‘bring ‘em down and then just shoot ‘em in the head anyway’ mould. At worst, the shootouts come down to little more excitement than participants just bringing out a bigger gun each time. Along with the flashback, that there’s another shootout in the middle, and an even more extended one as the finale – which not only includes flashbacks to the first shootout but is also featured for a couple of minutes at the start of the film – that leaves very little of the 90-minute running time not devoted to tedious gunfire. You might at least have hoped for better from action director Johnny Tang, whose CV includes Vampire Cleanup Department and Golden Job, as well as work on the big-budget Cold War series as an assistant.

Even for a Honk Kong film, director Jacky Lee and scriptwriters Choi Meng Wa and Lam Siu Fu seem to struggle to find the tone. As the mawkish sentimentality of Tam and Wong’s backstory takes over, the film manages not to satisfy either audience – those looking for exploitative fun nor those wanting more earnest action films. You can’t help but feel it’s taking itself way too seriously. Later in the film, director Lee suddenly remembers that his audience are there to see the female stars. The officers need to change their clothes quickly. Que a raunchy rock guitar soundtrack. Except, hilariously, as the ladies are in such sensible underwear as you might expect from an officer – though I’m sure ‘short shorts’ aren’t official uniform – the chances of even the slightest titillation are low.

The script is not only misguided but banal: the bad guy is flagged so early on as to be completely obvious. More screen time spent developing the characters rather than sticking them straight into gunfire would have helped immensely. Lee seems to have lost the important lesson from the Michael Mann shootouts he tries to recreate here: they only become tense (let alone interesting) if you know and care about the characters.

Sadly Patrick Tam, who provided such a sterling riff for Aaron Kwok in Port Of Call and excelled in various other supporting roles, overacts in his melodramatic role here. Jade Leung fairs little better, with Michael Tong (God Of War) barely utilised. Interestingly though, Jeana Ho and Hidy Yu, along with new additions Lin Min-Chen (Vampire Cleanup Department) and Jade Lin (Jadie Lynn, Chinese Zodiac), bring some nuance to their performances – much more than you’d expect from a film like this. Only highlighting again the many opportunities the filmmakers missed here.

The ‘girls with guns’ subgenre of Hong Kong action was always tricky. Rather than a modern resetting of the wuxia bold female hero, they often fall prey to the male gaze. Efforts by directors like Corey Yuen, from Yes Madam to So Close, often redressed than balance by dent of those stars being less prone to states of undress, and having damn fine action sequences. Others were more problematic, even The Inspector Wears Skirts series that the original Special Female Force was billed as a tribute to. But at least those films knew what they were, instead here the refocusing on a male character who we are meant to feel sympathy for seems completely out of line with the post-#MeToo era. It comes across as a rather feeble whimper of ‘what about the mens’.

Sadly, The Fatal Raid is a dull, half-cocked misfire, for which your time will be far better spent tracking down those classic, if hokey, originals first or slicker updates to the genre like So Close. And don’t even get the pedant in me started about whether either of the main shootouts constitutes an actual ‘raid’…