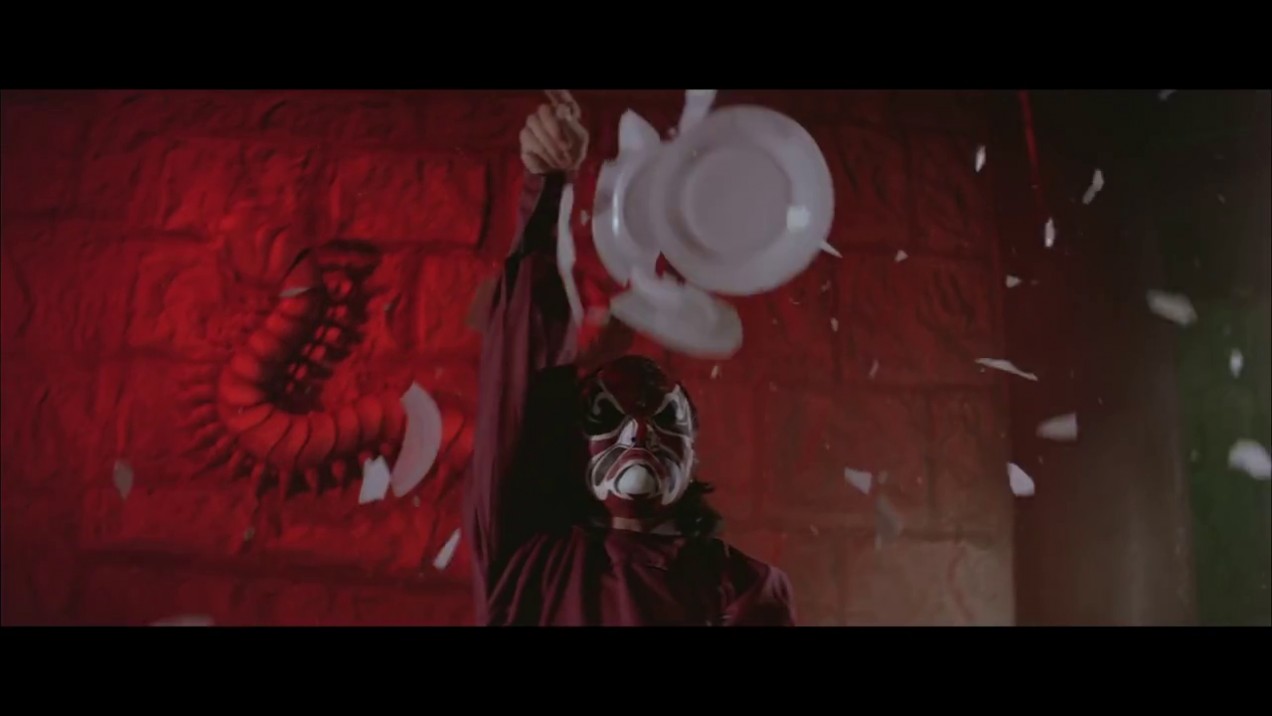 Cult? Sure. Legendary? Definitely. Kick-ass? Mostly. Any good? Depends on how cool you think venomous reptiles and stick-on beards are? Thought so…

The dying master of the notorious Venom clan, who sits, straining, in a giant steaming cauldron (no that’s not a metaphor) sends his youngest and only remaining student, Yang (Chiang Sheng) on a quest to salvage the Venom name. A name with a reputation for villainy and all things distinctly non-heroic within the martial world. His five previous students, who make up the film’s title, have all left and assumed new identities. Yang’s to find them and, if they’ve not led pious lives since leaving the clan, snuff ‘em out.

Each ‘venom’ has a particular skill inspired by the venomous reptile they take their secret name from. So, Centipede (Lu Feng) has super-fast fists and feet; Snake (Wei Pai) deadly, puncturing fingers; Lizard (Gecko in some subs, Philip Kwok), the ability to run up and stick to walls; Scorpion (Sun Chien) lethal kicks and lovable Toad (Lo Meng), iron skin that’s impenetrable to all blades.

These useful facts are given to us in a neat, primary-coloured infomercial, where each venom, complete with decorative mask, demonstrates his iconic abilities. This is firmly for us, the viewer, Yang has been trained in all five venom styles so you’d hope he’d already know his snakes from his toads.

So, to recap, root out the last five venoms and if it turns out they’re bad guys, kill ‘em. Fine, sure, whatever. The problem is Yang’s skills are not a match for any of them on his own; jack of all, master of none, so he needs to team up. So, find the last five venoms, hope at least one isn’t a bad guy and team up with him to kill the rest. If they’re bad now. The master has a plan to lure out the venoms: treasure bait (never fails). An elderly and retired clan member has holed himself up in a small village and has hidden his clan’s spoils. Yang is to find him and ask him to donate this cash to charity. There’s nothing like money to draw out evil relatives.

So Yang heads off to an unnamed village, armed with nothing more than youthful spunk, to try and find no less than six anonymous people who may or may not try to kill him. Good luck with that.

It quickly transpires that Toad and Lizard (good guys) know each other as do Snake and Centipede (bad guys). And Scorpion? Just who is the mysterious masked Scorpion chap, and is he friend or foe?

Those expecting a hard-hitting kung fu movie may well be disappointed as there’s very little martial arts action on offer, what’s there is concise and energetic, there’s just not that much of it. No matter. The Five Venoms plays out as a brightly coloured, convoluted, whodunit, or rather, who is it, with everyone running around, in a decidedly conspicuous fashion, trying to work out what they’re supposed to be doing / looking for / assassinating. The plot rattles along at a blistering pace and before you know it, it’s, disappointedly, all over.

Director Chang Cheh is famous for defining the heroic bloodshed genre, that would become synonymous with the martial arts arm of studio Shaw Brothers; a serious, epic genre, with big battles, blood loss and often very little humour. The Five Venoms though is anything but big or serious. It’s small, cheap, light on extras and unashamedly fun. The costume designer certainly had a sense of humour. Centipede, Snake and later in the film, Yang each have memorably silly outfits that would embarrass even the most undignified of children’s entertainers. The costumes do however make it very easy to keep track of exactly who’s who, good if you’re the sort who often finds it hard to tell who’s who when everyone has on nearly identical gear and wigs. Yes, like me.

Despite the special effects being wonderfully second rate, who knew blood could be that shade of red, they are still rather nasty. A Chinese iron maiden, a burning hot metal chest plate and a throat barb are among the more gory delights on offer. And if it wasn’t for these brutal torture scenes, that punctuate (in most cases literally) the second half of the film, I would have said The Five Venoms was a family film or at the very least produced with a family audience in mind.

The acrobatic ‘venoms’, as the main cast would come to be known as, are wonderful, loud and charismatic. This is their finest hour and there’s simply nothing quite like The Five Venoms. It’s not as ‘weird’ as Boxer’s Omen (what is?), or as stupid as Buddha’s Palm or Holy Flame Of The Martial World and doesn’t have the martial art complexity of say a Lau (Mad Monkey Kung Fu) Kar-Leung film. But is has something. It has character. It has passion.

Yes. The Five Venoms is one of the most famous cult martial arts movies ever. This is probably, 90%, due to it being bloody brilliant but I think it being one of the few Shaw Brothers’ movies that actually got a legitimate release in the west, many years ago now, (courtesy of a Warner Brothers dub) also has it’s part to play. The Shaw Brothers estate famously sat on its thousand plus archive for most of the VHS boom years (idiots), with bootlegs being the only way to see many of their movies. I’m not saying The Five Venoms is undeserving of its reputation, it’s just watched within the context of it’s, now more familiar, bigger budget and crazier cousins it may feel a little cheesy. Again, no matter.

The Five Venoms is a rare movie, possessed of an infinite replayability; as soon as it’s over all you really want to do is watch it again. And again. And it most definitely, distribution rights in it’s favour or not, deserves it’s cult standing. Despite Yang’s indescribable waistcoat. Now it’s on iTunes so you have no excuses not to see it. None.