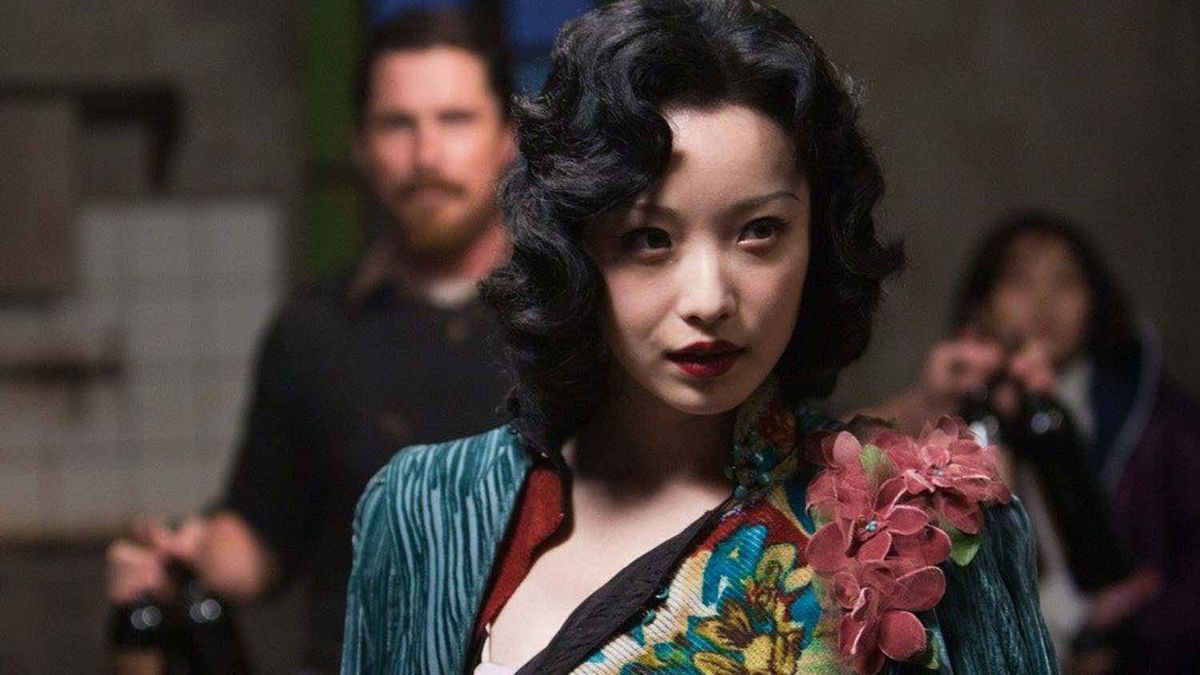 Zhang Yimou’s The Flowers Of War arrived in UK cinemas, barely noticed, despite the casting of the Dark Knight Christian Bale. It didn’t help that reactions to screenings at festivals like Cannes and Berlinale had been mainly negative. Why?

Bale appears as John Miller, a mortician caught in the conflict to prepare a priest at a catholic church for burial. Arriving to find the he is the only adult amongst the church’s convent girl students, when a group of prostitutes from a nearby brothel arrive led by Yu Mo (Ni Ni). He quickly finds himself in the unenviable position of acting as guardian for both groups against the horrors of the invading Japanese army, attempting to save all their lives…

The Flowers Of War is not a terrible film by any means – Zhang Yimou is one of the world’s greatest and easily most aesthetically pleasing filmmakers – but the juxtaposition of sexual violence with sexuality, comic moments and snappy dialogue often comes across as frivolous if not insulting to the memory of the horrific events of Nanjing.

Depictions of the Nanking Massacre have always been problematic. The atrocities committed there are among the worst committed in the name of any conflict, it’s not such distant past that feelings don’t still run high when it’s represented in art, particularly on screen. But here with a mainly female cast, you wonder if Zhang takes the other title for the massacre, the Rape of Nanking, too earnestly – surprisingly so considering this is adapted from the work of a female author, Geling Yan.

Yan is no stranger to film adaptations, her work having been previously adapted by Joan Chen and Siao Yu as Xiu Xiu: The Sent-Down Girl, and by Sylvia Chang as Shao nu xiao yu. She also contributed to the screenplay for former Zhang collaborator Chen Kaige’s biopic about Mei Lanfang, China’s greatest opera star, Forever Enthralled; and the screenplay for the new high-profile Chinese/South Korea/Singapore co-production of Dangerous Liaisons.

There’s no doubt strong female characters obviously had great appeal to Zhang. Perhaps the playful nature of the relationship between the young students and their knowing, sexually charged counterparts was a fault of the original book. The snappy dialogue and endearing performances by the cast are strong; particularly Ni Ni in the role of Yu Mo. Born in Nanjing, Flowers Of War marks her feature film debut and will not the last we’ll see of her by a long shot. However the dialogue is flawed: the references are too modern and knowing for the 1930s.

I don’t feel some of the accusations made against Bale’s acting are fair. Hell, if he’s not losing 50 odd pounds for a role or donning a black mask it seems people are always going to say he’s ‘phoning it in’. But the casting of Bale says everything about Zhang’s intentions for the movie. It’s not simply a case of aiming for a worldwide, particularly Western audience; this is set in the same year and conflict as Empire Of The Sun, a deliberate tip of the hat to Bale’s earlier (and breakthrough) role, as well as that films director, Spielberg.

This has ‘big blockbuster’ written all over it. Not necessarily a bad thing, but it does make you wish for the smaller, more intimate films that are as much a part of Zhang’s cannon – though they rarely make it to the UK, and even if they do, like Riding Alone for Thousands of Miles, they end up completely mishandled and buried.

The action sequences are well orchestrated to near wuxia heights, at least as far as the last Chinese soldier Major Li (Dawei Tong, Red Cliff, Lost In Beijing) are concerned. The set design is epically grand, the composition achingly beautiful. The costume design, with contributions by Wong Kar-wai collaborator William Chang, who worked on In The Mood For Love (you know where I’m going), is exquisite, particularly the ladies’ dresses. They could easily start a trend for those that can get away with that shape. (Though again, they feel a little modern.)

Visually this film truly delivers. Even the devastation he shows seems eerily striking; it’s as if Zhang can’t help himself. But should war look this, well, good?

Which brings us back to the unfortunate tone. The threat of rape is all pervading; if the film were any more graphic at certain points it would have more in common with an exploitation film like Mou Ton Fei’s Black Sun: The Nanking Massacre. For me, the inescapable comparison was with Lu Chuan’s City Of Life And Death.

Chuan’s film came only three years ago; though not perfect it was a balanced and well-researched attempt (he’d literally read about the conflict for years) to bring the atrocities to the screen, even if it did make for near relentlessly grim viewing. Unlike Zhang’s vibrantly colourful approach, he’d shot the film in black and white, stating at the time that horrific sights might be too distracting. Perhaps even subconsciously recalling Spielberg himself on Schindler’s List.

Chuan’s film had run into controversy due to making one of the Japanese soldiers sympathetic. With something of a post modern eye towards more recent events in places like Iraq, Chuan’s point was that anyone can become a monster; it most definitely was not about forgiving what had been done. But just maybe this wasn’t the place to make that statement, audiences in China did not appreciate it and stayed away.

I found it rather interesting to find a statement from director Zhang saying he had done something similar, made his Japanese characters multi-levelled. If anything, this is more of a backward step; the Japanese aggressors are (often almost literally) faceless. Even Atsurô Watabe’s character of Colonel Hasegawa (Love Exposure, Three… Extremes, Ashura) is shown to be nothing but a smarmy liar, contriving the situation to present virgins (I kid you not) to his superiors.

It obvious Chuan’s film informs Zhang’s – for instance, the collaborator who works with the Japanese in order to secure his daughters freedom is almost the spit of a very similar role in City Of Life And Death – so that may go quite a way to explaining Zhang’s rather one-dimensional take on the Japanese forces.

Though emotive, you are always conscious of being manipulated as an audience. Again, that’s no worse than the majority of Western films, but it lacks the height and true power of Zhang at his best. There’s an inevitable romance between Bale and Ni Ni, culminating in a spurious love scene. There are several narrative dead ends, such as the Chinese soldier who doesn’t really contribute much more than a great action sequence. Perhaps the most haphazard inclusion is the back story to Miller’s dedication to the girls, so much of an afterthought as to be unnecessary – it actually robs the character of some of his humanity: who wouldn’t be outraged by these events?

The Flowers Of War is both brilliant and disappointing… but worth watching.

(And no, you shouldn’t be this happy to see Paul Schneider from Parks And Recreation, especially as his appearance is only a few minutes!)

The Flowers Of War was given a limited UK cinema release earlier this month, and is available on UK Blu-Ray and DVD from Revolver Entertainment.

Strong transfer of the film, but intriguingly presented in 1.85:1 ratio on the DVD and Blu-Ray, when IMDB lists this 2.35:1. Perhaps someone at Revolver can explain why the UK release has been recropped?